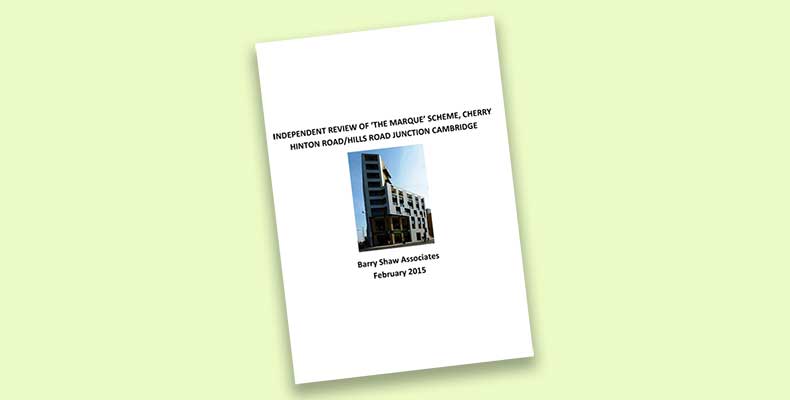 How on earth did something as hideous as “The Marque”, the building on the corner of Hills Road and Cherry Hinton Road, ever get built? Last year, to its credit, the city council commissioned a report to try to find out – and that report has just been published.

The report is 58 pages long and you can read it for yourself here. I’ve just done so, and to be honest, it does look like a bit of a whitewash. Almost everybody’s role in the process is found to have been acceptable, and most of the problems with the architects, developers and construction are dismissed as being the sort of thing which we should expect to have to put up with, in this type of project. Here’s one of the most notable conclusions:

“Cambridge has an exceptionally strong record of delivering high quality projects, and this project did not meet the highest expectations. However that is not the same as saying the planning team failed significantly with this project. In many other local planning authorities The Marque would be seen as a good project.”

I’d hate to live anywhere that The Marque would be seen as a “good project”, and the fact that this report was commissioned at all says that many people think likewise. One of the things which concerns me the most, but which didn’t make it into the report’s meagre two recommendations, was the importance of public consultation. It’s acknowledged that this has a strong role to play, but there’s no suggestion that the public should be listened to more. With someone from the architectural profession reporting on the architectural profession, this is perhaps not surprising. But there’s incredible insight and talent out there amongst the general public, if only the planning process was geared up to actually listen to it, rather than fight it.

The first of the report’s recommendations is that “the extent of technical support information required to support innovative, technical or high rise planning applications should be reviewed. Large scale technical drawings (1:20 or 1:5) should be required, with such supportive technical reports as are necessary, as part of the set of approved drawings.” This is common sense, but I’d suggest that in this day and age, the public deserves mandatory photorealistic representations from all angles, and (in the case of imposing buildings) from a distance too. If anyone from the planning department was actually aware of how appalling The Marque would look from half a mile down Cherry Hinton Road, how on earth did they allow the development to go ahead?

The other recommendation is that “the Planning Committee should consider imposing a design quality section as part of S106 agreements. Issues that might be covered should include protecting design quality through changes to the lead architects and the requirement in some circumstances for independent technical support to be paid for by the developer.” This is all good stuff, but I wonder how practical it is.

3 Replies to “The Marque: it’d be a “good project” elsewhere, apparently”