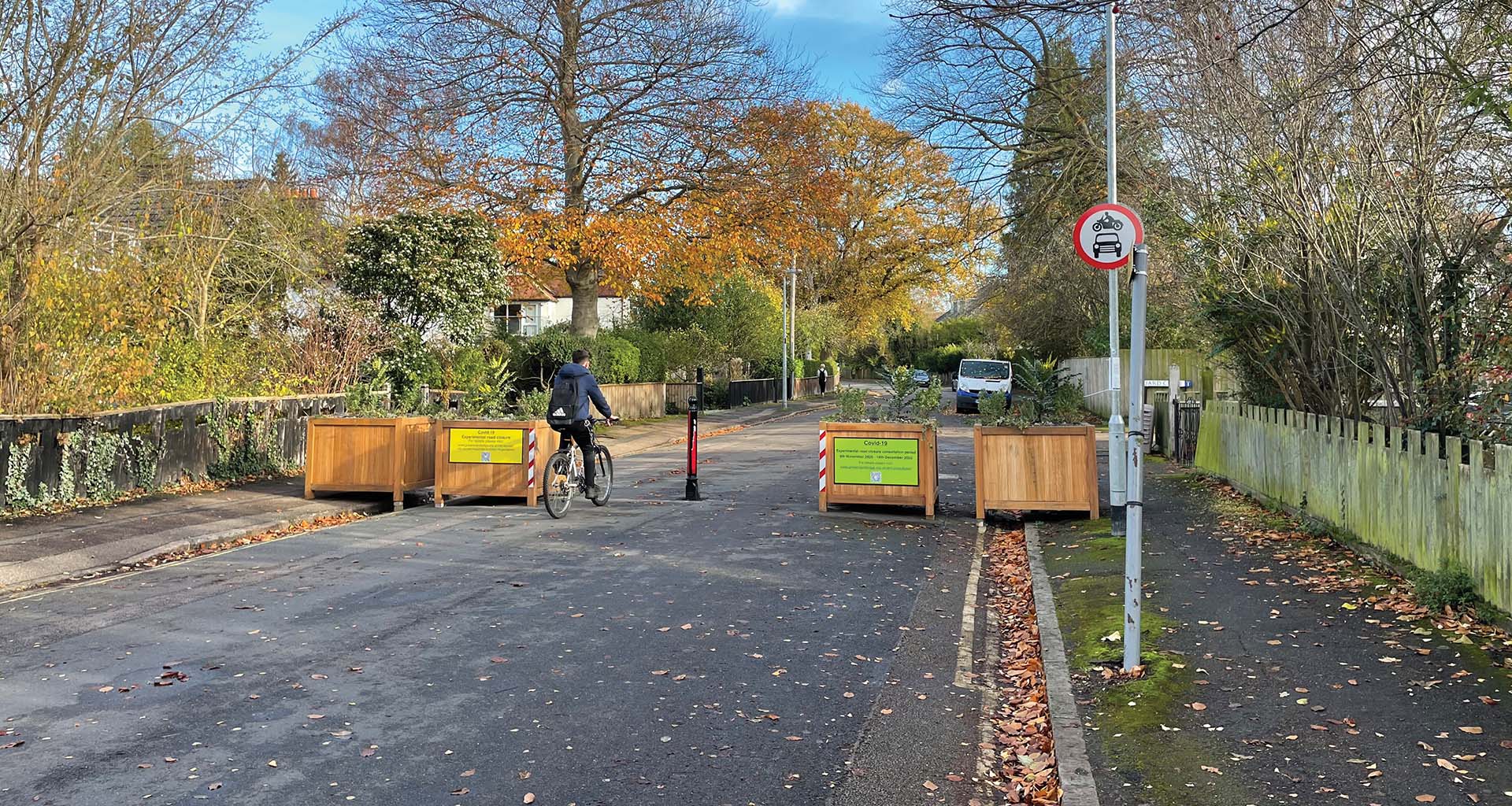 Last summer, six sites in the city were chosen by Cambridgeshire County Council to have ‘experimental measures’ to create more space for pedestrians and cyclists. This work was funded through the Greater Cambridge Partnership’s budget.

The measures took the form of ‘point road closures’ in Carlyle Road, Luard Road, Nightingale Avenue, the Newtown Area and Storey’s Way, as well as expansion of the bus gate restriction in Silver Street.

Well, it seems to be time to make a decision on whether or not to make these permanent. In true Cambridge local authority fashion, this will require no fewer than three separate council meetings.

The first is a meeting of the Greater Cambridge Partnership ‘Joint Assembly’ on 9 September, which will be “invited to consider the proposals and comment on the emerging recommendations for the individual schemes”.

The next will be a meeting of the Greater Cambridge Partnership Executive Board, on 30 September, where the Joint Assembly’s views should be taken into account when agreeing on recommendations.

Finally, these recommendations will be put to the County Council’s Highways and Transport Committee for a final decision. This will probably meet at the start of November.

Yes, yes, but what are they going to do?

Well, decisions can be made and changed from one meeting to the next, so who knows? But what we do have are the ’emerging recommendations’ from council officers.

And these recommendations are that all of the schemes should be made permanent …except the Luard Road one, which should be removed.

But hasn’t the Luard Road scheme proved quite popular?

Yes it has. Based on a public consultation getting over 1200 replies to the various schemes, the Luard Road point closure scored the highest level of ‘strong support’ of all six locations!

It also had the lowest level of ‘strong opposition’ of all six.

It also scored highly in how people felt about improved road safety; improved noise/pollution/ambience; and whether it should be retained. It came second out of the six in all three categories.

Interestingly, on ‘whether it should be retained’, it scored more highly in responses from non-residents than it did from residents (although both groups were overwhelmingly in favour), i.e. the consultation results were not skewed by any sort of neighbourhood campaign.

So… why do council officers want to get rid of it?

Good question. It seems to tick all the boxes. The officers’ report says that consultation responses show that it has been successful in improving walking and cycling and making the area safer.

The only drawback of the scheme, according to the report, is that “a review of journey times on Long Road in the morning peak following the closure suggests that eastbound delays have increased at a time when overall traffic levels on the road network have reduced.”

In other words, there might be a longer queue of traffic on Long Road heading to the Hills Road junction in the mornings. But there is no data on this.

Where has this information about the delays come from? Well, according to the report: “Some local councillors consider that whilst residents of Luard Road and Sedley Taylor Road may have benefited there are concerns over the anecdotal impact on congestion and delays on the alternative route via Long Road and Hills Road.”

So they’re claiming local councillors are to blame?

Yet… with all that feedback saying the scheme has been popular and a success, I rather doubted that our local councillors would have been against it.

So I asked them.

Luard Road and Sedley Taylor Road are (absurdly) in the Trumpington county council division, but Luard Road decants traffic into the Queen Edith’s division on Hills Road, which means there’s a second county councillor tangentially responsible. I asked both of them if they’d flagged issues with congestion and delays on Long Road.

Queen Edith’s councillor Alex Beckett said he hadn’t been involved, as it wasn’t his division, and Trumpington councillor Philippa Slatter said she wouldn’t have said anything unless it was based on data or solid local knowledge, neither of which she had.

So it wasn’t them.

I tried the city councillors, and here I got a clue. Councillor Sam Davies replied: “At the draft report presentation in early July, I asked some questions about what data they had on impact on bus transit times on Hills Road. They said they were short of data, so I encouraged them to get some, just to check that bus passengers weren’t being disproportionately affected by traffic re-routing down to the Hills Rd/Long Rd junction.

“I haven’t heard since whether they secured that data or what it might have said, but either way that isn’t the rationale for removing the filter that they refer to in the final report, which only mentions delays approaching along Long Road from the east (which I think would only affect the 25 service).

“I would still like to be reassured that bus transit times on Hills Road aren’t being disproportionately affected; but to remove the modal filter on the basis of queuing private traffic on Long Road makes no sense to me.”

At the time of writing, I haven’t heard from our other two city councillors, but I think I’ve heard enough. I’m pretty certain that the reference to the ‘concerns of councillors’ aren’t a real thing.

It looks like councillors innocently asked if there was any increased congestion causing problems for buses, and this query was turned into some sort of formal concern, perhaps through ‘Chinese whispers’.

So is the council officers’ recommendation to remove the scheme a mistake?

I’ve no idea. But we need to ensure that the succession of council meetings decides whether to make it permanent or remove it for the right reasons, and doesn’t just follow a recommendation from officers which seems to have little substance.

And what should that decision be?

It seems straightforward to me. There is no data and no real evidence of any serious drawback from the Luard Road point closure. The scheme is extremely popular, both with local residents and others from further afield, and it is meeting its aims of providing a safe and attractive route for cyclists and pedestrians – particularly the many young people attending local schools and colleges.

I’d like to add the following. The junction of Luard Road and Hills Road was formerly an extremely dangerous one. There were many serious recorded collisions and injuries over the years, but there were far more unreported ones. Rarely would a week go by without local residents hearing a screech of brakes representing another ‘accident’ involving any combination of cars, vans, bikes and pedestrians.

Since the point closure was introduced, there have been no reported incidents, and I can’t recall seeing or hearing an unreported one either. None at all.

For this reason alone, I think the scheme deserves to be made permanent at least as much as any other.

Can I do anything to support this view?

I think the council meetings have a pretty straightforward case in front of them, but our county councillors will need to make the case to retain the scheme, and some public support might help them. So if you’d like to offer your thoughts, please do.

My suggestion would be to politely email the county councillor for Trumpington, Philippa Slatter, and perhaps CC the county councillor for Queen Edith’s, Alex Beckett. Ask if they would request council officers to reconsider their recommendation to rescind the current experimental order for the point closure on Luard Road, on the basis of its proven popularity and the lack of any evidence for rescinding it. Include your full name and address.