The Greater Cambridge Partnership (GCP) is the joint organisation set up by the three councils in the area (with university and business representation) to manage the ‘City Deal’ budget to improve transport, jobs and housing. It has had a faltering record on different projects, but its ‘City Access’ scheme has been in development for a while now. As part of this, it is proposing a reclassification of the roads in the city.

There are different types of road classification, but how they are classified matters. It determines the types of vehicle that are encouraged to use them, whether they’re designed as a through route, and more.

The current road classifications in Cambridge were last reviewed around forty years ago. In Queen Edith’s, two roads are classified as “A” roads. These are the A1134 (the city ring road) which takes in Long Road, a short stretch of Queen Edith’s Way, Mowbray Road and Perne Road; and the A1307 (Hills Road and Babraham Road). Fendon Road is also classified as an “A” road. 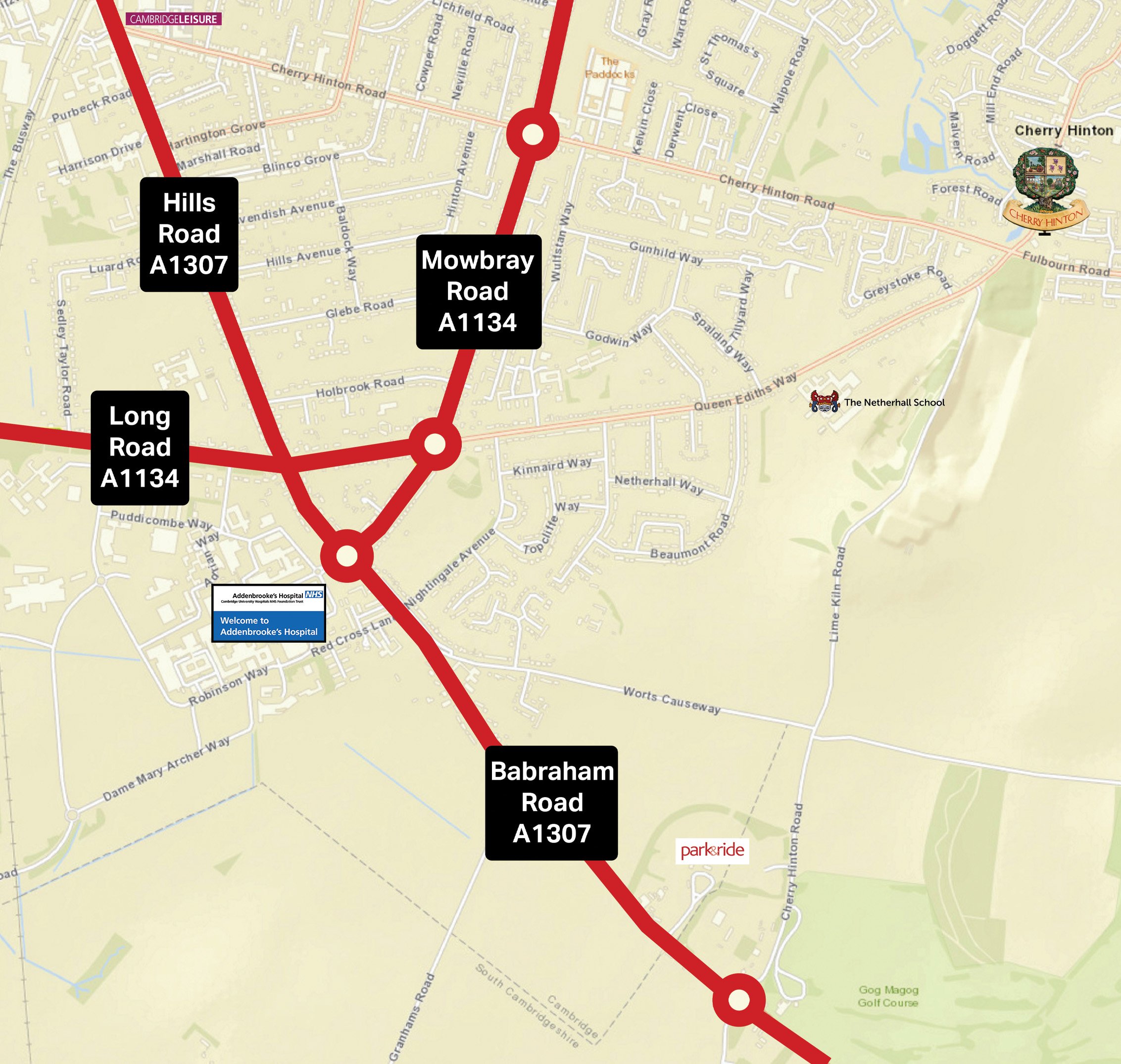 The GCP has come up with six road classifications, and made a recommendation of how these could be applied across the city.

At the fundamental level are ‘neighbourhood streets’, which account for the majority of the smaller streets in every neighbourhood. The GCP proposes allowing access to motor vehicles but discouraging through movements on these streets.

Outside of the city centre, the next level up are ‘area access streets’ and ‘local access streets’, which give access to larger and smaller areas of the city. The GCP proposes these would not usually be subject to any access restrictions, but should not be used to move between ‘distributor roads’ (see below). Generally they would have a 20mph speed limit and limited parking.

At the top level are ‘primary distributor roads’ and ‘secondary distributor roads’. These are the main roads for traffic moving to, from and around the city. Car parking would be restricted to lay-by or off-road spaces, and generally they would have a 30mph speed limit (but 20 mph where the road layout warrants it).

The GCP has come up with a plan of how these classifications could be applied. It is suggesting that the existing ring road (and Fendon Road) would be a ‘primary distributor road’, in line with its existing A-road status. The same would apply to Hills Road south of the Long Road junction, and Babraham Road. However, it is proposing that Hills Road north of the Long Road junction, right into the city, is classified only as an ‘area access street’, a substantial de-prioritisation. The city half of Cherry Hinton Road would also be classified at this level, as would Queen Edith’s Way.

Similarly, it looks to me like the scheme aims to encourage the southern access to the city to be split between Trumpington Road and a Trumpington Road – Long Road – Hills Road – Babraham Road route.

Here are how the GCP says the proposed classifications could be applied: 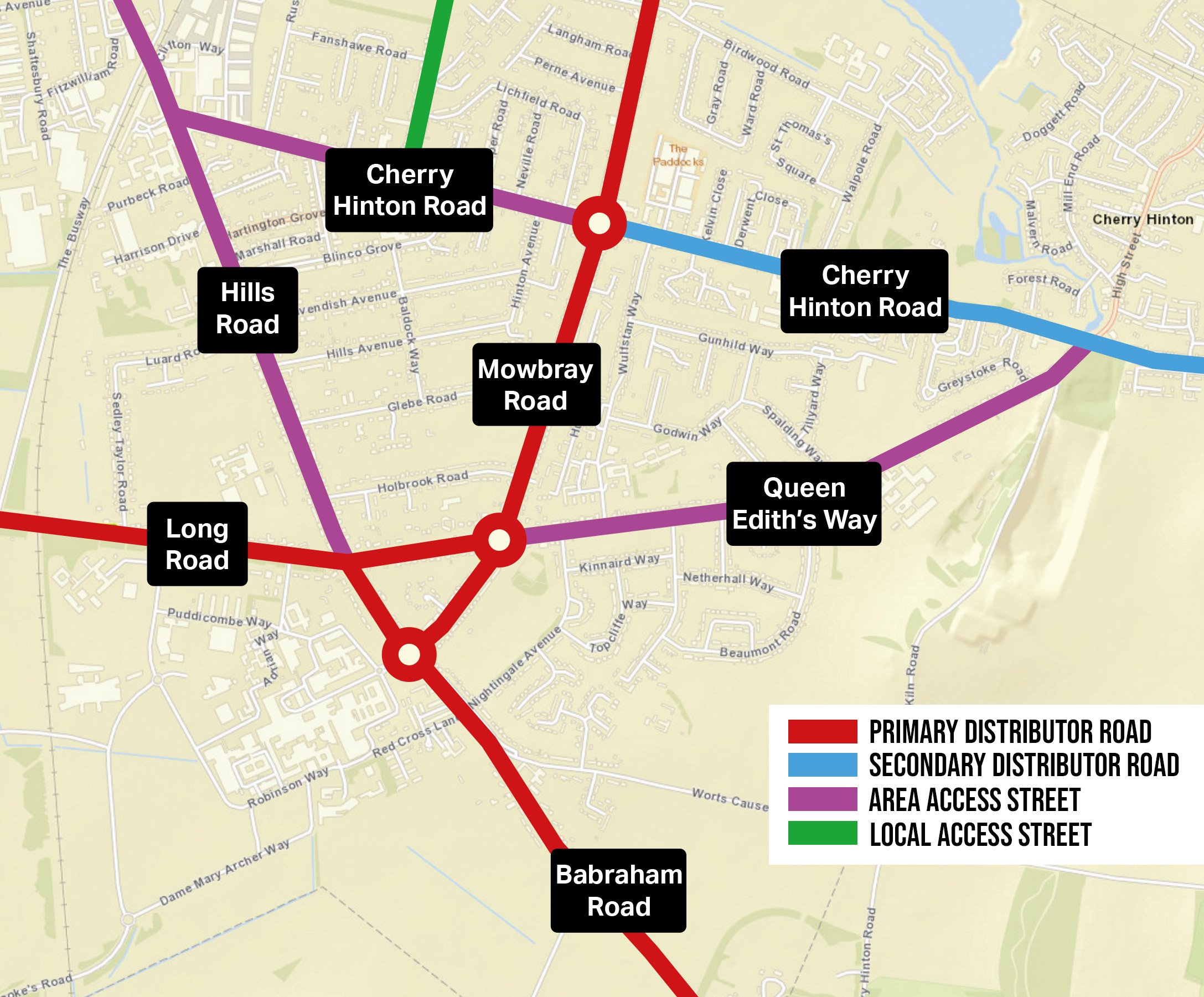 In summary, under the proposals, some Queen Edith’s roads will remain as main roads into and around the city, but others will be downgraded in importance, which could result in less traffic. In addition, 20mph speed limits are likely to be introduced to some of the roads currently at 30mph, and we might expect to see more barriers of some sort put up to prevent ‘neighbourhood streets’ being used for anything other than access.

A speed limit is pointless, of course, if it’s not enforced, and stricter enforcement is something which I think most of us can get behind. At the moment, the police seem to have other priorities, and the government has no solution to the rapid rise in cloned number plates.

So, what happens now? The GCP wants to hear what the public (that’s us) thinks of its ideas.

To join our mailing list and receive automatic notifications when anything new is added to this site, fill in your details here.