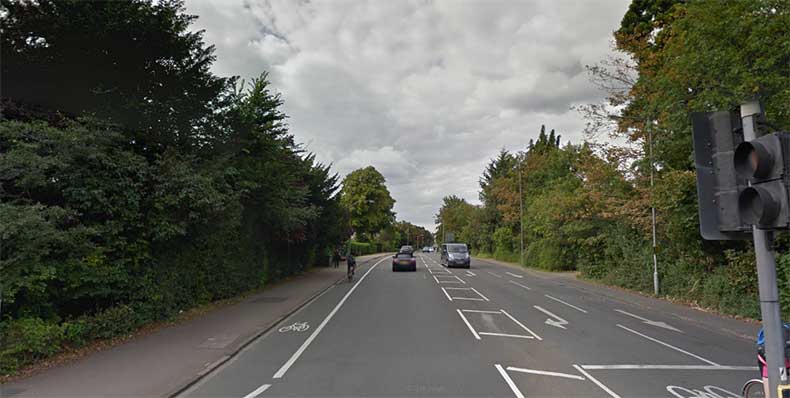 Hills Road (above): it’ll never look like this again

The remodelling of Hills Road between Long Road and Cherry Hinton Road, to accommodate ambitious cycle paths, is now under way. It’s causing controversy between some residents and the council; a group of residents who’ve been monitoring things carefully are concerned that the contractors are taking liberties compared to the approved plans, although others have only started raising concerns since the work actually began.

As far as the latter group is concerned, local councillor George Pippas requested confirmation from council officers that everything had been done to make details of the scheme widely available. The response from the council officer concerned was as follows:

“In terms of public consultation for the Hills Road scheme, the Project Team followed the usual process of delivering consultation leaflets (with feedback form) to a wide local area, and had three local afternoon/evening events in March last year. Drawings and information on the proposed scheme were put on the County website, together with contact details if members of the public wished to get in touch. The Team also had information stalls at Hills Road VI Form College, Long Road VI Form College and at an Addenbrookes? Sustainability Event.

“79% of the 845 respondents to the public consultation supported the proposals to improve cycling on Hills Road (42% were responses from local residents). The views contained in these responses fed directly into the next stage of the design. The Project Team received many highly detailed responses to the proposed scheme. The Hills Road and Huntingdon Road, Cambridge, Cycleways report (for the 27 May, 2014 Economy & Environment Committee meeting) summarises under point 6 the responses to the public consultation on the Hills Road scheme. Under point 7, the report refers to the responses of the larger stakeholders and statutory consultees such as Cambridge Cycling Campaign (over 1000 members), Cyclists? Touring Club (a national charity), Stagecoach, the East Anglian Ambulance Service and disability groups. It was not possible to include all 845 responses to the public consultation within the report, but on page 10/17, the consultation responses are named as Source Documents ? Economy & Environment Committee Members deciding on the scheme can, therefore, ask to see them.

“In November, the Team took the unusual step of doing a letterdrop to residents inviting them to a pre-construction event – this was residents? chance to find out about boundary issues, construction sequence etc. This event was well attended by residents of Hills Road. The letter also included details of where the final drawings could be seen on the website and asked residents to provide email addresses if they wanted updates on the scheme. Despite these efforts, it was only when works on Hills Road began that some residents chose to engage properly with what was happening on their doorstep.”

I have to say that although I normally accuse the council of being appalling in its communication with residents, in this case I don’t think it could have done a better job. The level of response is a good indicator of that. But what of the issues which are still being raised? These particularly involve the loss of grass verges, and how the project fits in with the report on Hills Road commissioned by the council from Beacon Planning in 2012, which is well worth a read.

The council officer tells us:

“The carriageway width is being reduced – to 6m. Unfortunately, the roadside verges on both sides of the road will be lost; on the outbound side of Hills Road, the verges on the residence side of the footway will remain largely the same except at those locations where space is needed for the floating bus stops. On the citybound side (the side with the current shared-use cycle/footway) the verges on the residence side of the footway will be increasing. To add further greenery, the design includes a half metre sedum strip between the cycleway and the footway on both sides of the road. Contractors will certainly not be removing trees or hedges or encroaching on front gardens. They will need to prune back some trees and hedges, especially at those locations where vegetation has spread several feet over the highways boundary. Those residents who attended the November pre-construction event, and asked about floating bus stop locations, hedges and verges, were given details of the areas they were interested in. These details included loss or gain of verge.

“County highway boundary documents show that some Hills Road residents have planted shrubs and flowers on Highways land. Unfortunately, space is at a premium now as County try to accommodate good cycling provision. At the end of January, members of the Project Team met with residents and the local County Councillor to try to resolve some of the issues that have arisen.

“Re. the Beacon Planning report, the City Council is of course a statutory consultee for every cycling project within Cambridge. The Project Team was keen to gain the input of City?s Urban Design team on the Huntingdon Road and Hills Road schemes ? a meeting with the City?s Head of Urban Design was arranged before the schemes were approved and, in neither case were concerns raised about the proposals.

Our local county councillor, Amanda Taylor, has put together an excellent “Frequently Asked Questions” page about the scheme on her website. Again, it’s well worth a read. This confirms, for example, that the County Council has stated categorically that no trees will be felled. Please feel free to raise issues in the comments section on this website, and I’ll try to get answers if any are required.