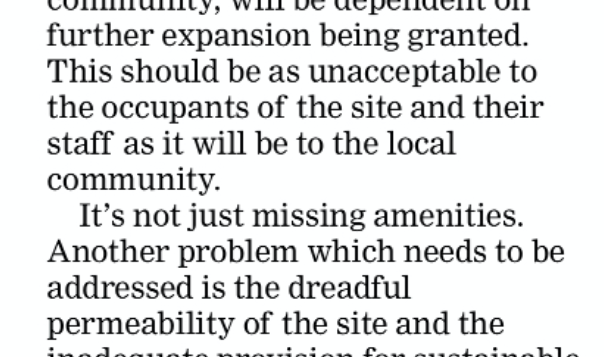 I had the letter below published in today’s Cambridge Independent newspaper. Here it is for those who don’t get the paper.

Your excellent interview (“A vision to grow and transform Cambridge Biomedical Campus“) was very welcome, as is the news that the campus is finally attempting to “speak as one voice”, perhaps 20 years too late.

However, the article clearly suggests that developments to make the site a more welcoming place, both for staff and the local community, will be dependent on further expansion being granted. This should be as unacceptable to the occupants of the site and their staff as it will be to the local community.

It’s not just missing amenities. Another problem which needs to be addressed is the dreadful permeability of the site and the inadequate provision for sustainable transport.

I would urge everyone to watch the video where Councillor Sam Davies tries to walk from the Hills Road roundabout to the site of the proposed railway station.

We do not want to hear excuses about current deficiencies being a historic failing which it’s too late to fix. Sorting out existing problems must come before any further expansion is allowed. Otherwise, all that will happen is that making the site a more welcoming place will be shunted a further 30 years down the road, only to find that the ideas won’t be deliverable because all the space has been taken up.

2 Replies to “Fix Campus problems before any expansion”