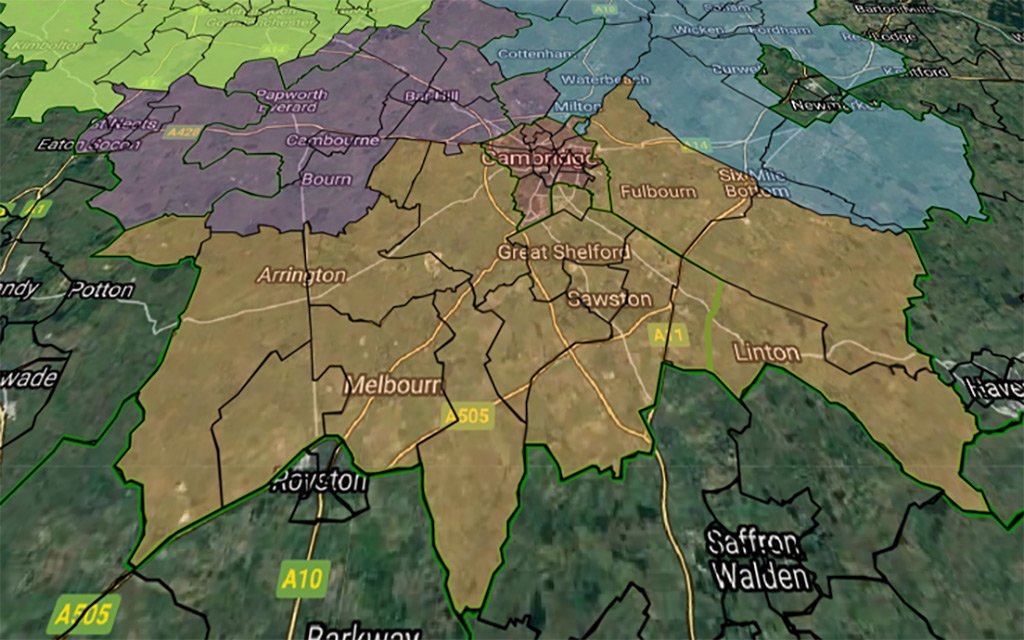 The Boundary Commission for England has unveiled its latest proposals for new parliamentary constituencies across the country. These are long overdue, as none have changed since 2010, and populations have been shifting at a decent rate. Many MPs now represent far more people than some of their colleagues.

The new proposals are designed to bring every constituency back within 5% of the average size, which means between 69,724 and 77,062 registered voters each.

Cambridge has long been an awkwardly sized city, containing more voters than the maximum size, but not really being big enough to split into two. The solution since 2010 has been to extract our Queen Edith’s ward and put it in the largely rural constituency to the south of the city, called South Cambridgeshire. As a consequence, our MPs for the last few years have been Heidi Allen and more recently Anthony Browne, rather than Daniel Zeichner, who is MP for the rest of the city. 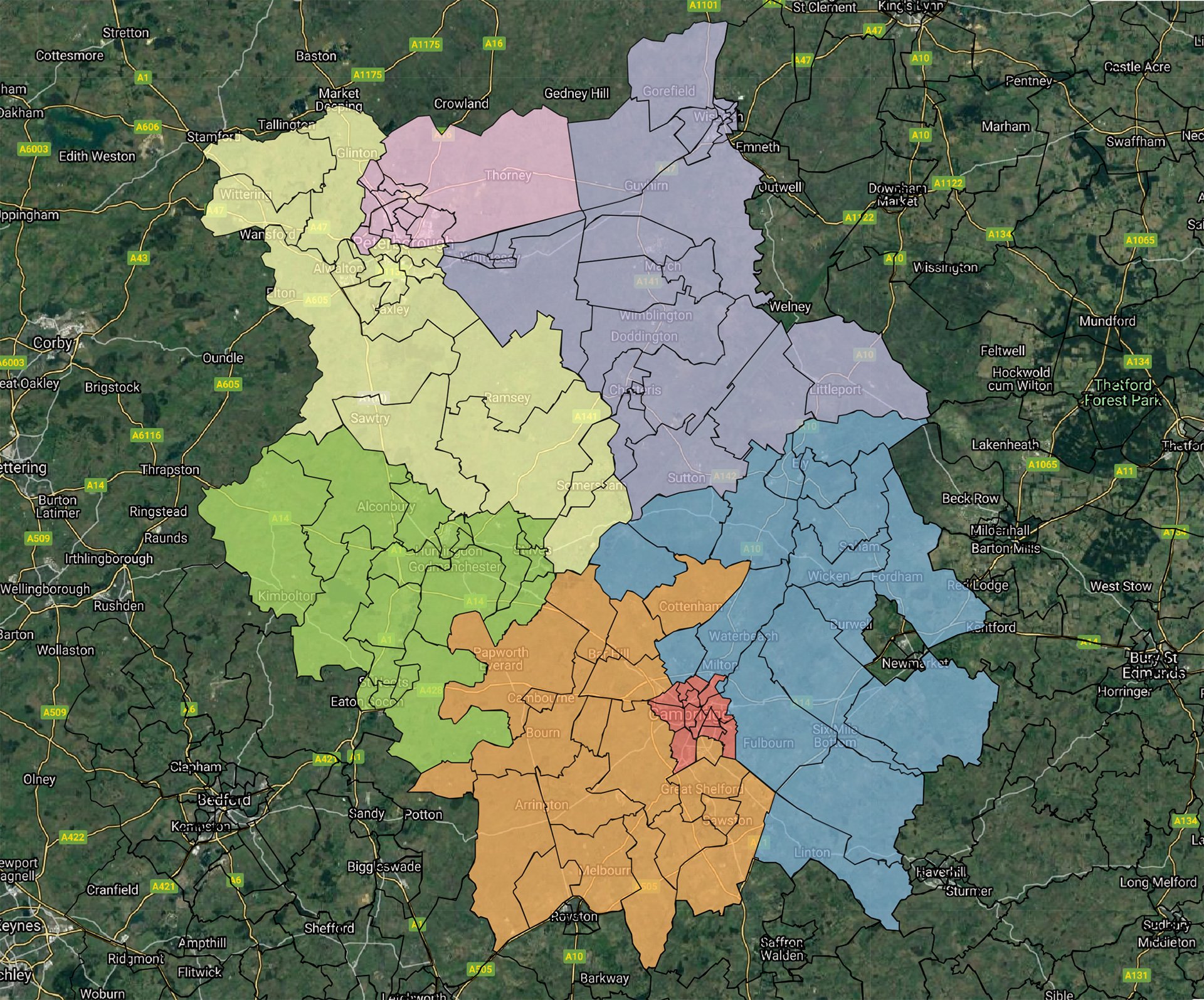 The population of Cambridgeshire as a whole has been growing so quickly that we are now due a whole new constituency. Here’s the Boundary Commission’s proposal for 2023 onwards, which includes that new constituency: 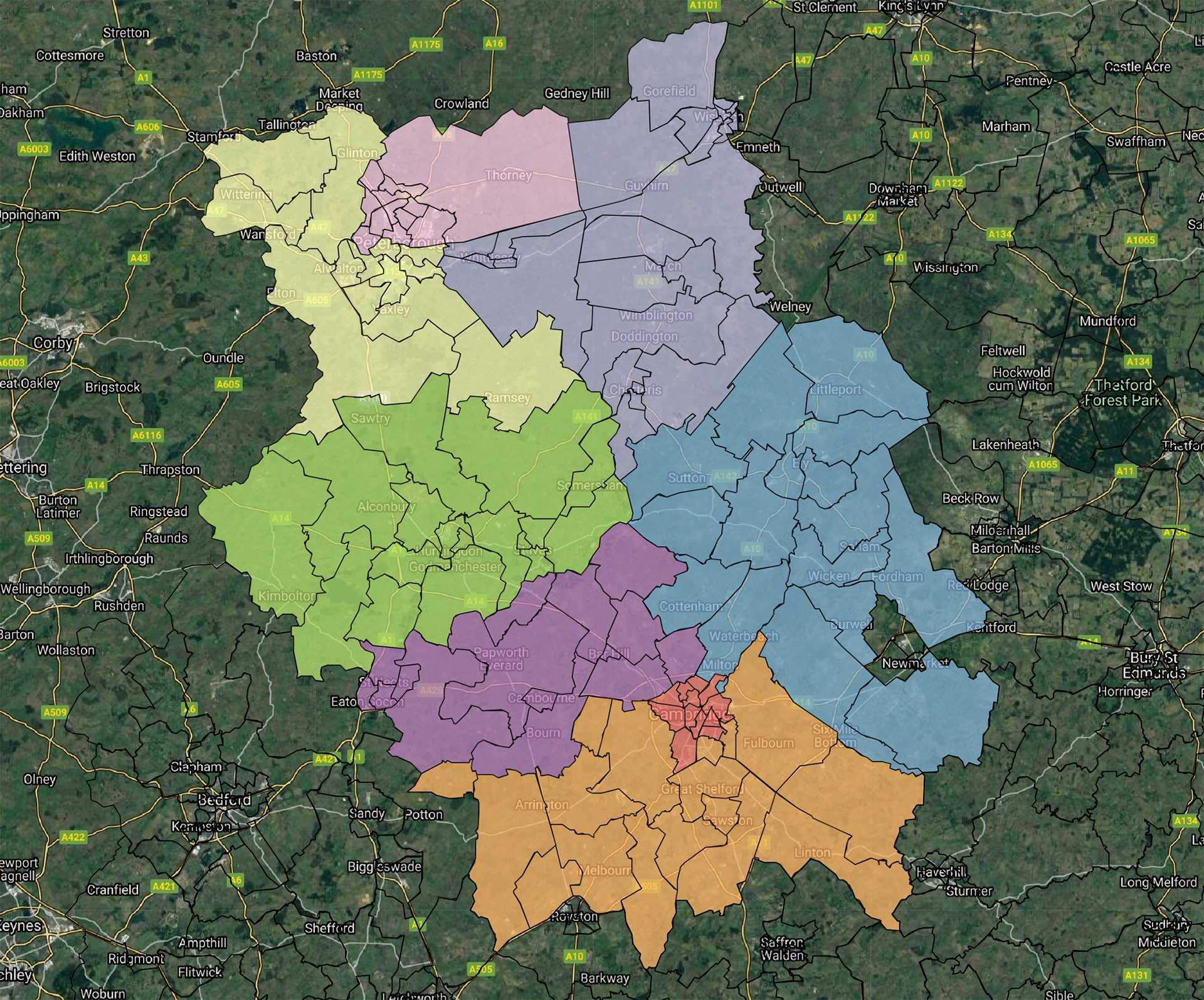 The new constituency has been squeezed in to the west of Cambridge, around St Neots and Cambourne, and other constituencies around the city shuffled round accordingly.

However, the city itself has the problem that extracting just one ward is no longer sufficient – at least two now have to be put into surrounding constituencies to keep it to the right size. Look carefully and you’ll see that the Boundary Commission’s solution is to move the Cherry Hinton ward out of the city, alongside Queen Edith’s. Here’s a close-up of how things are arranged at present: 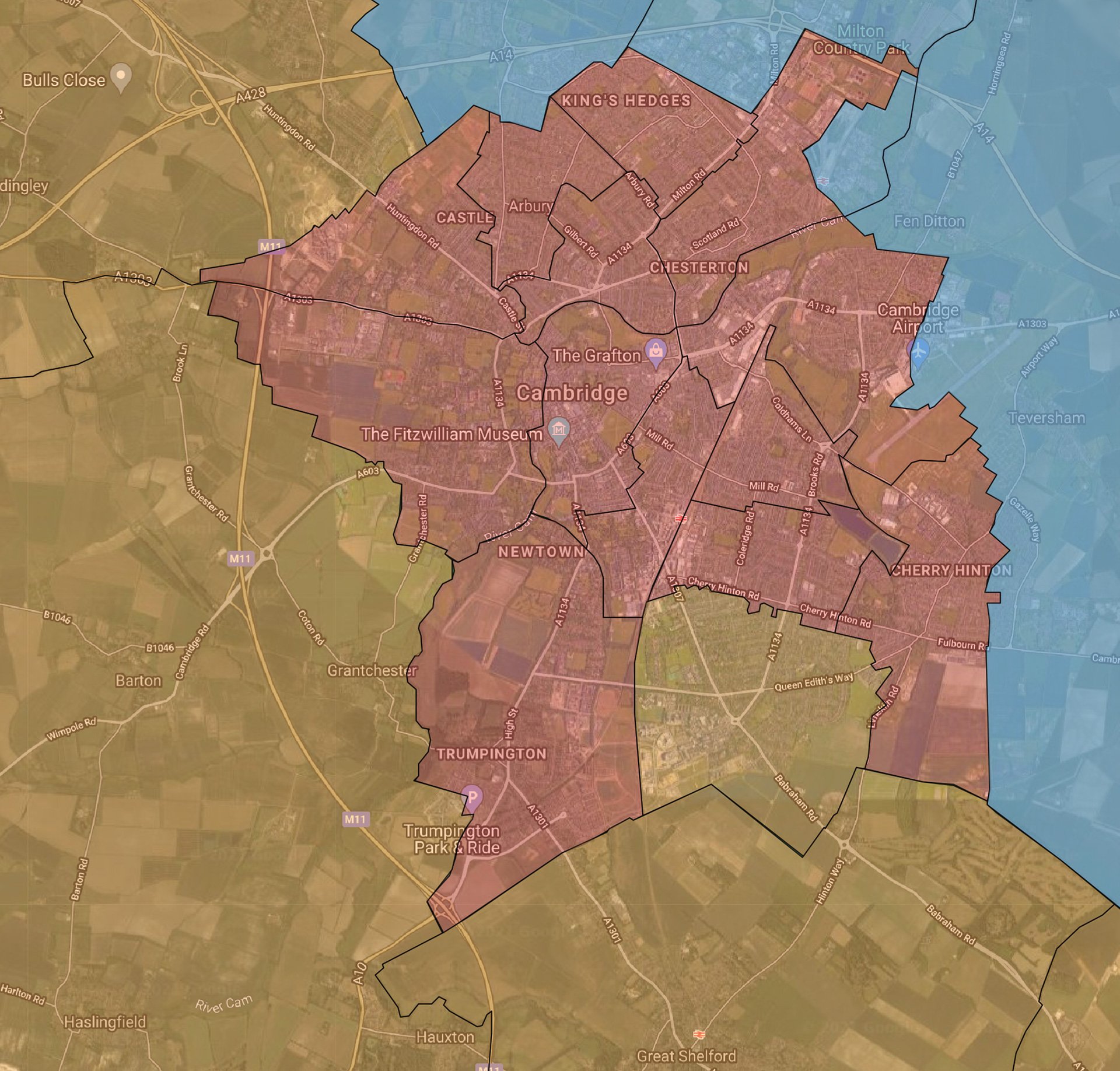 …and here’s a close-up of the new proposals: 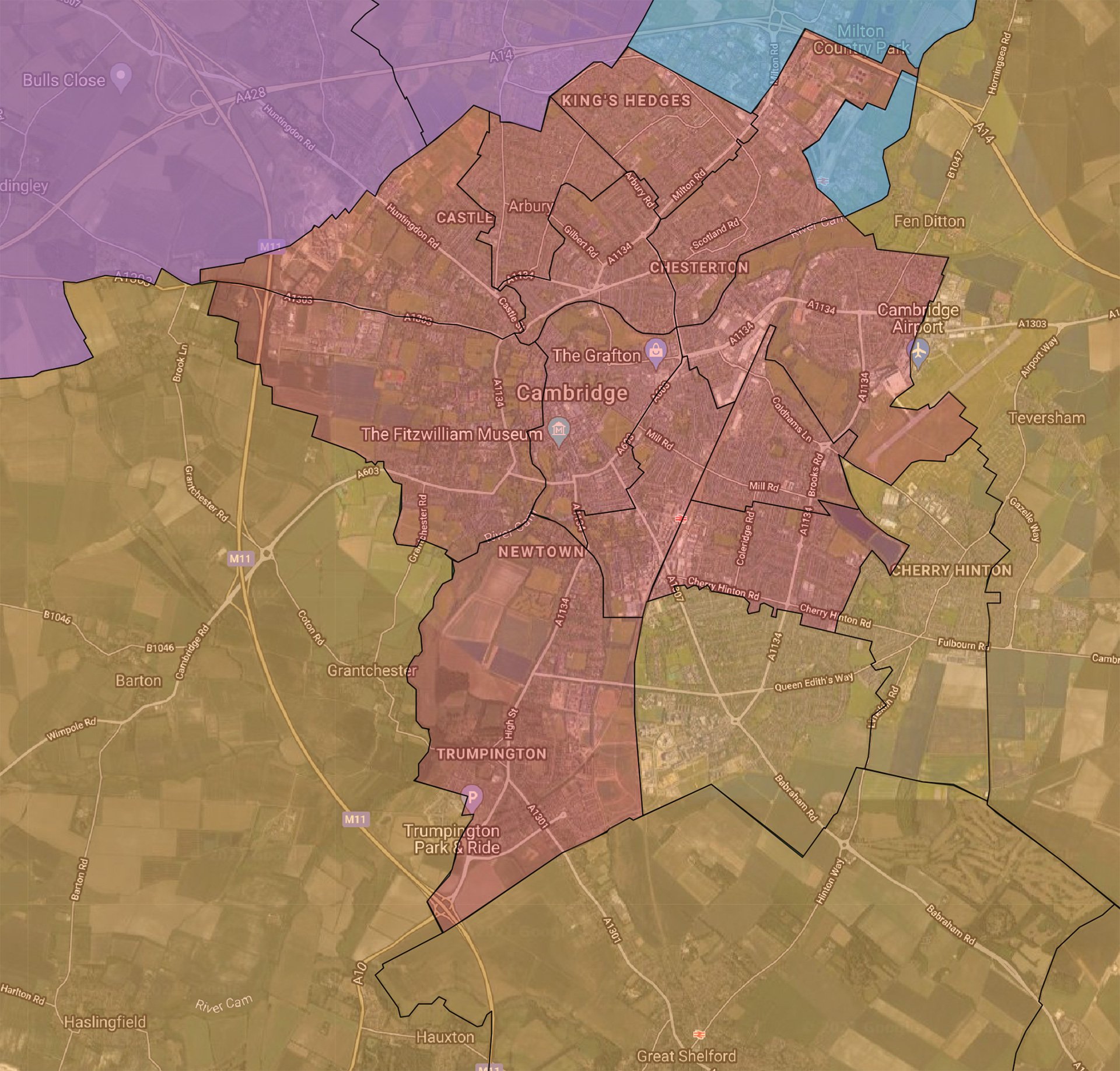 It would be preferable for all the city’s wards to be within the same parliamentary constituency, but if one has to be extracted, Cherry Hinton makes far more sense, as I’ve mentioned here many times in the past. Many people from Cherry Hinton have to travel through the Queen Edith’s area to get to the city centre, so surely that makes it a more ‘outlying’ ward. More importantly, a large part of the Cherry Hinton area is already outside of Cambridge, both in terms of the council and the parliamentary constituency, as you can see: 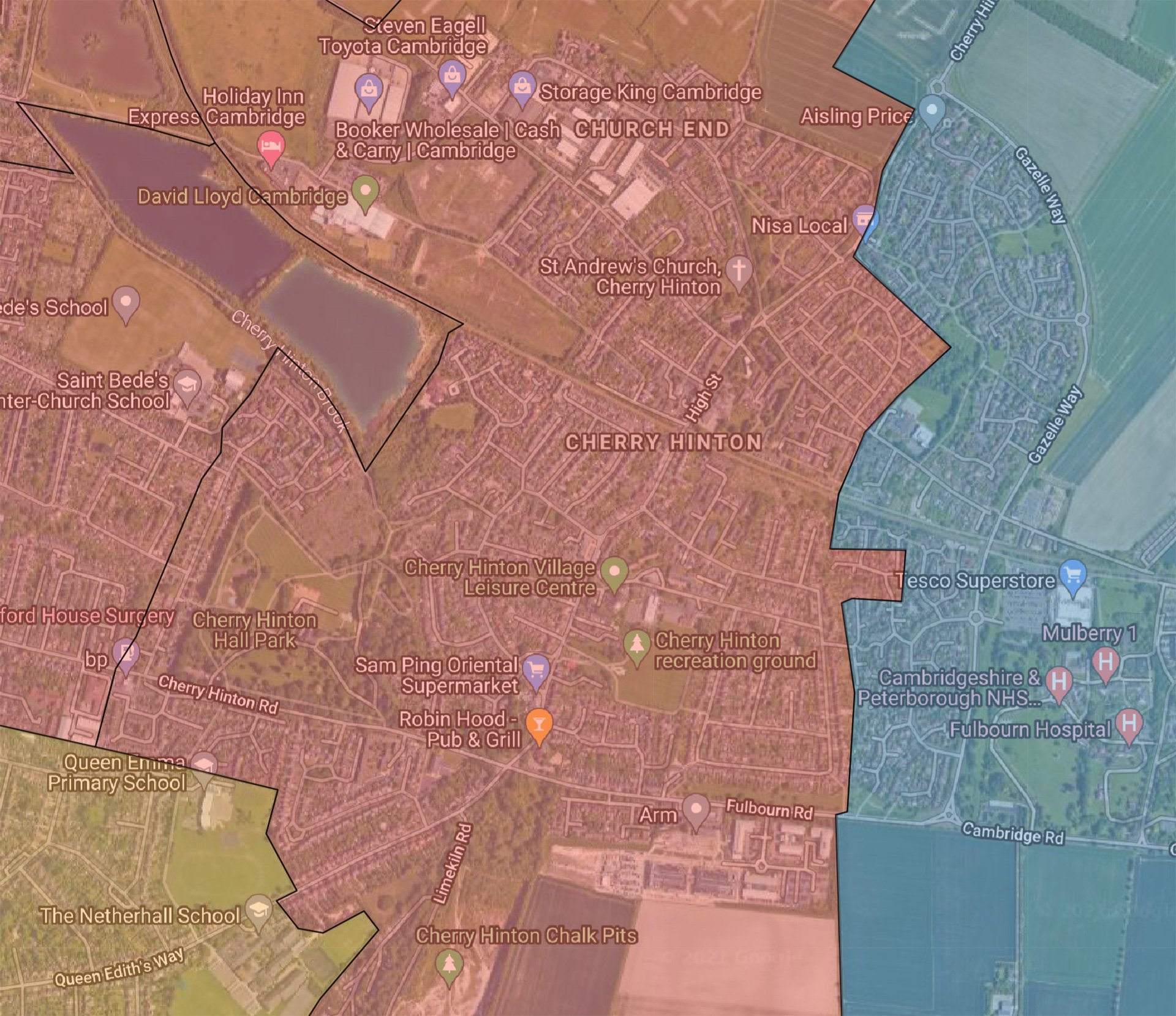 So Cherry Hinton should always have been the first choice to be the ward put in a parliamentary constituency outside of the city.

What we now need to ask is this: would Trumpington now be a better choice than Queen Edith’s as the second ward to be placed in a constituency outside of the city? This would not have been sensible in the past, because the ward used to reach right into the city as far as the main railway station. However, this has not been the case since council boundary changes this year, and Trumpington does not now extend into the city substantially more than Queen Edith’s does.

Like Cherry Hinton, Trumpington is also much more of a discrete population centre than Queen Edith’s, with its own community centre, ‘village’-style signs and facilities. As local historian Antony Carpen points out: “Both Trumpington & Cherry Hinton have long histories outside Cambridge Borough – (they were) only incorporated into the town in 1911. Queen Edith’s however is city overspill, and has no history outside the Borough – dating to the 1970s as a ward.”

In addition, Queen Edith’s contains the city’s largest employment site, the Cambridge Biomedical Campus. This sits very awkwardly outside the city’s MP’s responsibilities, and successive South Cambridgeshire MPs have failed to give it the attention it deserves, as it’s such an outlier in their area. This will become more of an issue in the future.

The local constituency boundaries would then look like this: 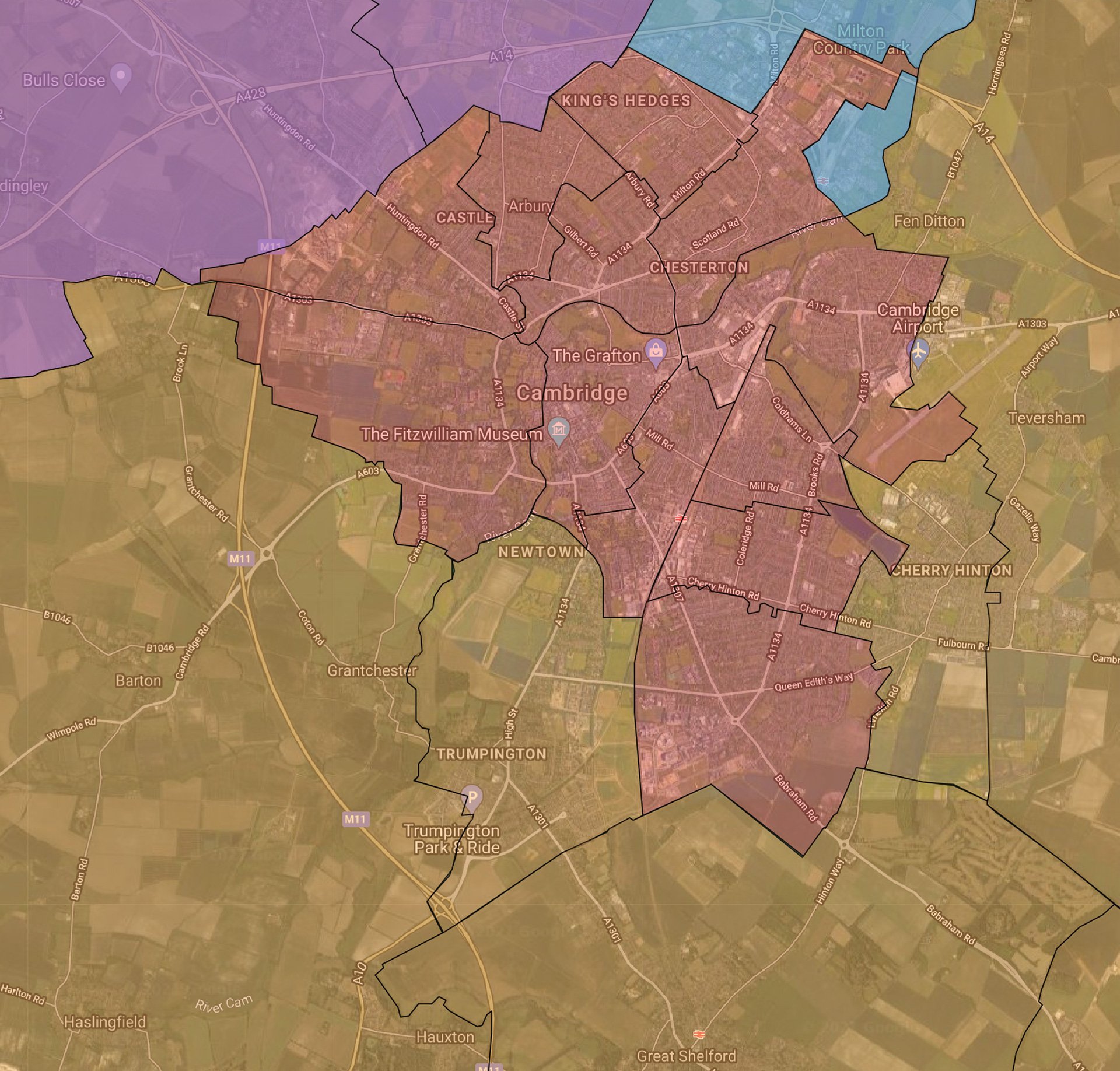 The new parliamentary boundary recommendations are now open for consultation. I would encourage every reader to respond with comments about which two wards should be outside of the city constituency. I certainly will be submitting my ideas. Note that final recommendations are unlikely to make it into law before late 2023. This should be in time for the next general election, which is scheduled to be held on 2 May 2024 in line with the Fixed-term Parliaments Act. However, there are already rumours that the government is in long-term planning for an election a year earlier, which would be fought under the existing boundaries.

There’s an easy form to make your comments here. It’s open until the 2 August.