Cambridgeshire County Council was recently successful in its application to the Department for Transport for ?4 million of funding “to achieve a transformational increase in the level of cycling in the Greater Cambridge Cycle City”. The application included a wide range of proposals, but amongst them was one to reconfigure Hills Road to provide segregated bike lanes. The application stated: “Hills Road is a very well used route for cyclists linking the Addenbrooke?s site with the City Centre. There are currently 1.4 metre wide mandatory cycle lanes on both sides of the road and the outbound side of the road has a line segregated facility that loses priority over side roads. It is proposed to remove some of the grass verges to introduce 2.1 metre wide, uni directional cycle lanes that are segregated from motor traffic and that segregate cyclists from pedestrians. Cyclists would be segregated by use of a kerbed island. There would be breaks in the island where private accesses or side roads are encountered ? in these situations the lane would continue as an on road lane, thus maintaining priority across junctions. A width of 2.1 metres allows faster cyclists to overtake slower cyclists in busier conditions and allows for cyclists to ride two abreast in quieter conditions.”

Here’s the cross-section included in the application:

To get a better idea of what the change might look like, I’ve also used my modest Photoshop skills to show a before-and-after: 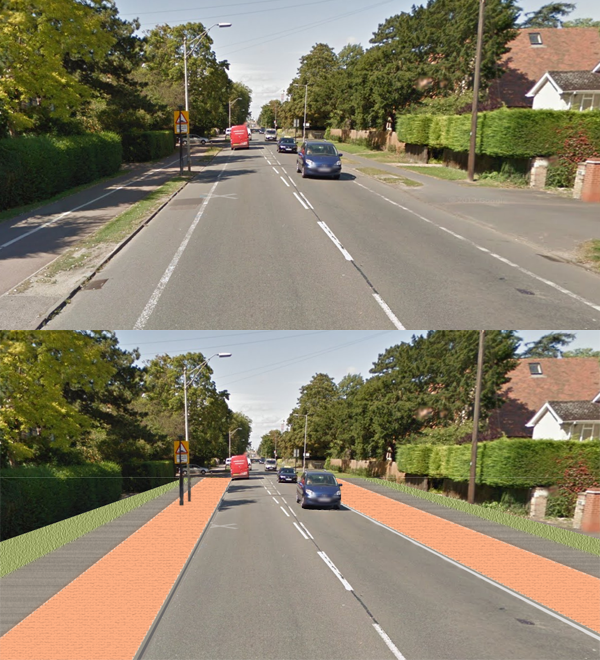 Naturally, the new scheme will, I’m sure, tidy up the road significantly and will therefore be a great aesthetic improvement. It’s a shame that it’ll all be happening so soon after the road has just been resurfaced at considerable expense and some inconvenience!

However, there are a number of issues which need to be considered and which will be of interest to Hills Road users and – especially – residents. There’s no doubt that it will make travel quicker and safer for cyclists, although the stop line for side roads will now presumably be set back further, restricting visibility for motorists turning on to Hills Road. I’m also concerned about how bus stops will be handled; even assuming that the new scheme won’t reach Cherry Hinton Road and therefore won’t affect the Sixth Form College stops, there are still two major bus stops between there and Addenbrooke’s, at the EF Language School and the Perse School. At both sites, large numbers of students get on and off the buses, and there are hazards in both cases. Remember that (assuming there’s not enough room for bus stop ‘islands’) the cycle lanes now divide the pedestrian pavement from the stopped bus itself. Where students are waiting to get on a bus, they will quite likely spill over into the cycle path (they can barely fit on the wider pavement at present). Of even more concern is that I assume anyone getting off a bus will step right into the cycleway – will cyclists and passengers both be warned of the danger?

Although not directly related, I also hope that the new arrangement will see the dangerous situation at the Long Road crossroads addressed, where cyclists heading out of the city to Addenbrooke’s cut diagonally across the junction to the pavement on the west side of Hills Road, so that they don’t have to negotiate the Addenbrooke’s roundabout. This presents a danger to pedestrians coming up from Addenbrooke’s, as well as to the cyclists as they cut across motorists turning right on to Long Road. I believe a solution needs to be found, but one which does not force cyclists on to the roundabout.

Excellent local blogger Richard Taylor has written about the scheme here, and the County Council’s application can be seen here. Recent Cambridge News stories on the subject can be read here and here.