The campaign to save the Cambridge Green Belt now has a website at http://www.greenbeltsos.org.uk which includes a link to a petition on the subject at Change.org. I’d urge all concerned residents to sign this. The petition says:

“We, the undersigned, call On Cambridge City and South Cambs Councils to withdraw all sites in the Green Belt proposed for development in the draft Local Plan.

* We oppose further destruction of the Green Belt. There are no exceptional circumstances that justify it.

* We oppose urban sprawl that will destroy the historic, compact character of Cambridge, its surrounding villages and countryside and will further add to traffic congestion.

* The Councils’ plans are based on out-of-date growth forecasts and first consideration should be given to greater re-use of existing sites (including brownfield) not in the Green Belt.”

It is addressed to Councillor Tim Bick, the leader of Cambridge City Council. In a recent Cambridge News article (below, click to enlarge) which mentioned the launch of the website, Cllr. Tim Ward, the Executive Councillor for Planning, seemed very dismissive of residents’ concerns, which has characterised the council’s attitude from the start. However, the residents behind “Save The Cambridge Greenbelt” are soldiering on, with a huge amount of local support behind them. 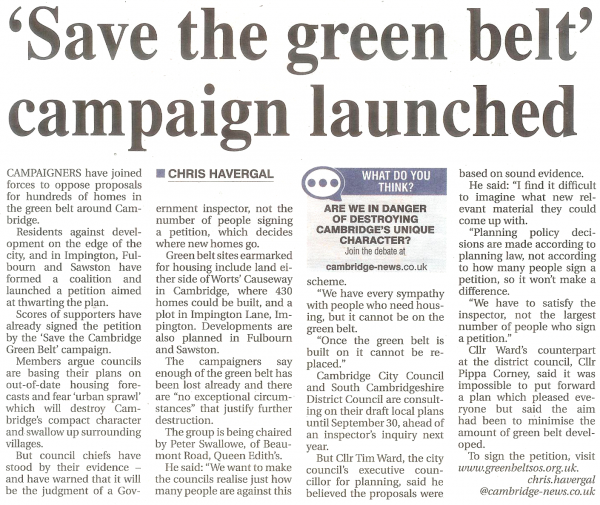 Letters to the local newspapers such as those below are also keeping the pressure on; as voters, we of course hold the ultimate sanction against councillors, as the letters point out (click to read in full): 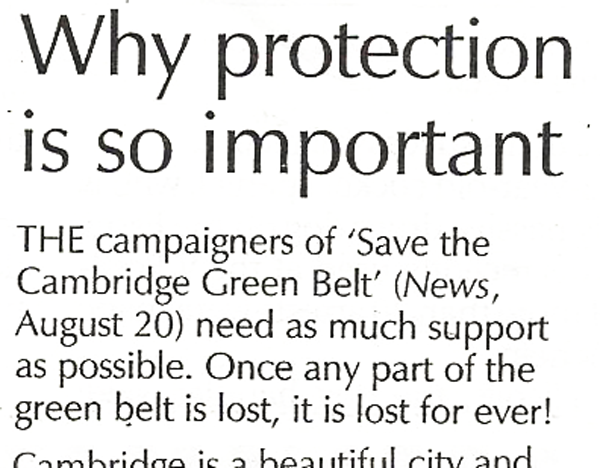 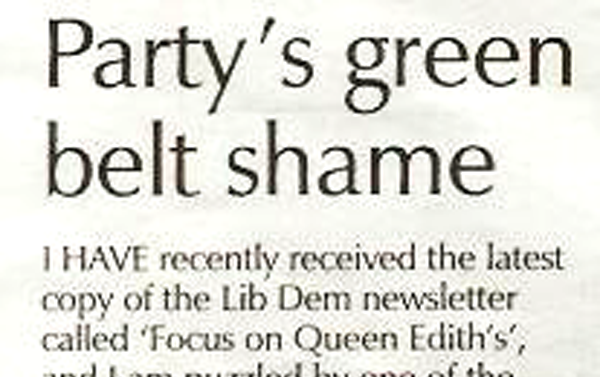 In the meantime, visit http://www.greenbeltsos.org.uk and add your name to the petition if you agree.

4 Replies to “Campaign to save the Cambridge Green Belt website”