On 2 May we will have the four-yearly election for all 69 councillors on Cambridgeshire County Council. I shall write about the various candidates here in Queen Edith’s some time before polling day, but I wanted this article to act as a background for those curious about the election. It’s a feature of British politics that voters aren’t issued with proper background on the election itself, or independent information about the candidates. Some of us dream of the day when the arrival of a polling card is accompanied by a booklet explaining to us what we’re voting for, who’s standing for election and a statement from each candidate. But that’s never going to happen while the major parties have more to lose than to gain from ensuring the public have a better understanding of an election, as it ensures, quite conveniently, that independent or minor party candidates will never get much of a look-in.

So until that day, you’re going to have to make do with articles like this to fill in the gaps. I will do my best.

So, for those of us in Cambridge itself, the city council is responsible for housing, leisure and entertainment, rubbish and recycling collections, licensing, planning and building control, Council Tax collection and environmental health services. And it’s only responsible for these in the city.

The county council, in contrast, is responsible for education, libraries, social services, roads and traffic, trading standards and waste disposal. But it’s not just responsible for these locally, it runs them county-wide (apart from Peterborough, which gets to do its own thing).

So this election is for a set of councillors who will control their own specific set of services, county-wide.

With me so far? Good.

One other difference between the more localised district councils and the county council is in the way the councillors are elected. Cambridge City Council elects a third of its councillors each year (with a year off every fourth year). So each councillor serves a four-year term, but the makeup of the council itself tends to change gradually.

Cambridgeshire County Council, however, elects all 69 councillors in one go every fourth year. And that’s what we’ve got coming up.

Now, for quite a few years, the residents of the city have tended to prefer Liberal Democrat and Labour party candidates, whatever the election. Actually, that’s a bit of an understatement. The two parties currently have 40 of our 42 city councillors. And at the last county council election, four years ago, Liberal Democrat candidates won 11 of the Cambridge city division’s 14 seats.

Here’s what that political makeup looks like on a map (taken from the county council’s website, and as of August 2012): 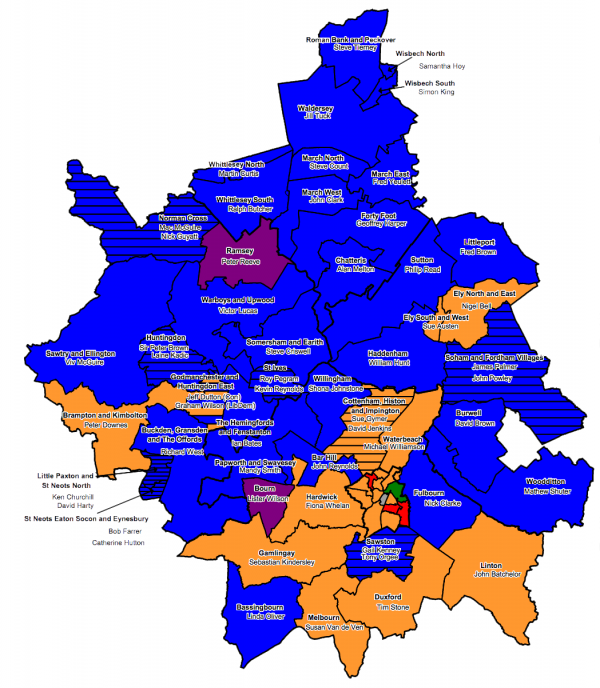 So, voting in the county council elections might seem rather pointless; whoever anyone elects locally, the compounded rural vote is likely to continue to dictate the majority on the council. That’s a shame for us here in Queen Edith’s, where the last city council election was unpredictable and exciting. You really felt your vote made a difference, because across Cambridge as a whole, the makeup of the city council also stood a fair chance of changing. However, it’s not all about the majority party! Electing good councillors (of whatever party) to speak up for the city on the county council is important, and that’s why I’ll be paying close attention to what the candidates have to say over the next four or five weeks – and writing about them here.

My look at the candidates is here.