A number of additional documents have been sent to us which will be of interest to anyone following the case of the Worts Causeway development, the justification for which does seem to be becoming increasingly brittle. All documents are PDF. 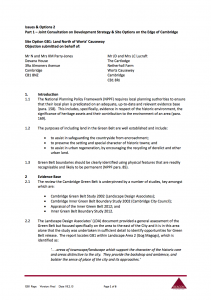 This 6-page objection to Site Option GB1: Land North of Worts? Causeway was submitted to the planning authorities on behalf of Mr N and Mrs KM Parry-Jones of 39a Almoners Avenue, and Mr JD and Mrs LC Lucraft of Netherhall Farm, Worts Causeway. In its conclusion, it states that “the Council?s evidence base in respect of the release of Green Belt sites for development does not support the allocation of GB1. On the contrary, the 2002 reports, which assessed the eastern fringe of the City in some detail, identifies the land in which GB1 sits as an important part of the setting. The subsequent reports produced in 2012, insofar as they relate to GB1, contradict the findings of the earlier more detailed report but provide no justification for the departure. The putative allocation also takes no account of the site?s physical constraints, which is surprising when considered in the context of the recent planning permission. The allocation is not justified by the evidence base and should not be taken forward to submission.” The objection’s appendices are here:
Appendix 1 (<1Mb, PDF)
Appendix 2 (2Mb, PDF)
Appendix 3 (1.3Mb, PDF) 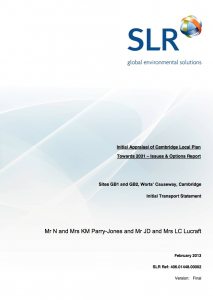 This 18-page Initial Transport Statement was prepared by SLR Global Environmental Solutions for the objectors above. The assessment concludes that: “In light of the lack of a suitable link through to Almoners? Avenue from GB1, the actual distances from the centre of both GB1 and GB2 are equivalent. On this basis, neither site lies within what Manual for Streets might call a ?walkable neighbourhood? and therefore the listed ?cons? for GB2 apply equally to GB1. The traffic generation of these sites cannot be confirmed as being capable of being accommodated into the local highway network or not having an adverse impact on the current bus route. As such, therefore, it is considered that the allocation of these sites would be contrary to the relevant Local Plan Policy relating to traffic impact. For this reason, it is considered that the appraisal of the site contained within the Cambridge Local Plan Issues & Options 2: Part 1 Joint Consultation is not reflective of the actual situation were these sites to be developed, and so this assessment should be reviewed and amended accordingly.”