Yesterday I mentioned that two of my favourite local destinations have had big news in the past week, and I described the new IMAX Screen 9 at The Light Cinema. The other local business which has just had its most important happening of the year was the only sit-down Indian restaurant in Queen Edith’s, the Taj Tandoori, which has just reopened after a refurbishment lasting nearly five months. Of course, I wouldn’t be a good local blogger if I didn’t urgently go to investigate…

The Taj Tandoori is a local institution. I vaguely remember being there with about twenty friends during my stag weekend, nearly 25 years ago. My family all love it, and we were devastated to hear, back in February, that the restaurant had closed until further notice …especially as the closure followed a Food Standards Agency inspection. This was a surprise to regulars: although the decoration at the place was basic, the food was always excellent, putting it in the top 5 local restaurants voted for by the 475-strong Cambridge Curry Crew group on Facebook, and in the top 3 Indian restaurants in Cambridge on TripAdvisor.

Manager Amin Syed subsequently explained: “Although there were some lapses in the cleaning of the kitchen, the main reason for the zero rating was down to the structure of the building. The back of the building was very old with holes in the walls, rotting wood and bricks crumbling. After consulting with the council we decided to voluntarily close the premises to rectify the problem. Further inspection with the builders revealed the structural problems to be far worse than we initially thought. As a result we had to rebuild the back wall entirely from scratch, re-point the entire brickwork of the remaining building and re-roof the entire kitchen.”

At that point, a decision was made to completely refurbish the front of the restaurant too. But these things are rarely without problems, and the work over-ran substantially. However, to everyone’s delight, the Taj has now finally returned.

The old signage outside has gone, so the restaurant is rather fetchingly camouflaged in matt black at the moment. I assume a new frontage is in the works, but until then, it’s our local secret: 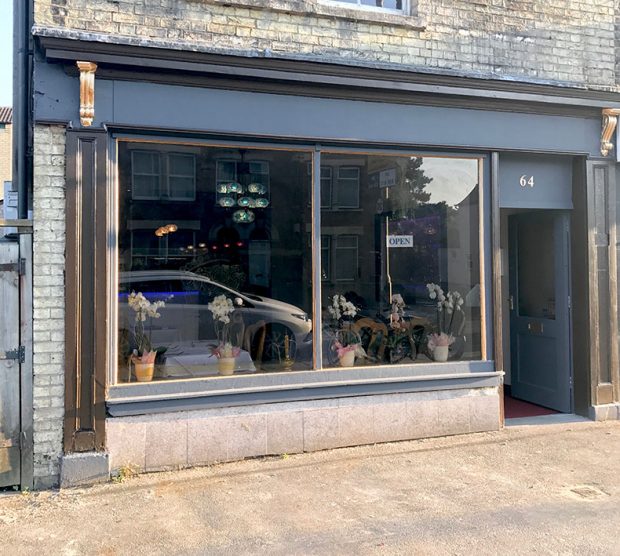 Inside, it’s a whole new space. Gone is the little corridor bit in the middle, and the washrooms have been relocated to the back. There’s a much larger feel to the place. Dare I say it, the Taj Tandoori is rather swish. 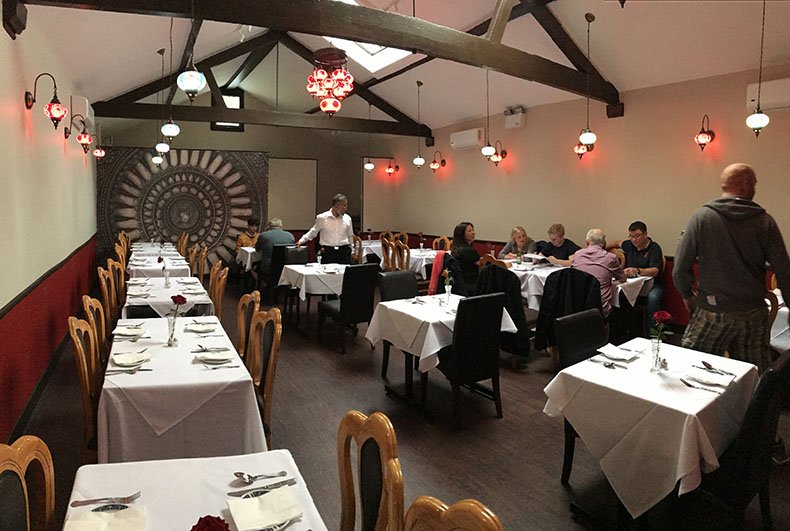 If you were a regular at the restaurant before March, the menu will be familiar, although it had not long been updated back then. It’s as extensive as any Indian restaurant I know, and suffice to say it’ll have almost anything you’re expecting, and more. Just to celebrate, I even deviated from my regular three course order, and tried the mixed pakoras (top) between the poppadoms and the main course. Very nice.

Prices are reasonable, and you’ll also be pleased to hear that the Taj Tandoori’s generous bring-your-own alcohol policy remains in place. So if you want a pint of Kingfisher or a celebratory bottle of Prosecco, don’t forget to drop in beforehand at Cambridge Wine Merchants or one of the two convenience stores a few yards away. There’s no corkage charge other than a tiny one for larger groups. Soft drinks are available at the restaurant.

After all this time away, I’m sure the owners of the Taj Tandoori could do with plenty of local support, so do drop by soon. The folks there are always a pleasure, and there’s a very good chance you’ll bump into me and my family too.

One Reply to “Taj Tandoori on Cherry Hinton Road reopens”