Two of the places in Queen Edith’s which I treasure the most have had huge, business-defining events in the past week. I’ll save one of them until tomorrow, but the first is the launch of the new Screen 9 at The Light Cinema at Cambridge Leisure: a fabulous, immersive IMAX screen which simply has to be experienced. Two years ago, soon after the cinema relaunched under its new ownership, I interviewed the chain’s Chief Executive Keith Pullinger for Queen Edith’s Community News, and he promised a steady stream of improvements. The venue has certainly delivered with its revamped bar area, and now it’s the turn of the screens themselves.

Whether by good fortune or immaculate planning, The Light’s new Screen 9 opened at exactly the right time for the one film this year which simply demands to be seen on a big, high-quality IMAX screen: Christopher Nolan’s Dunkirk. We went on a Wednesday afternoon, but the combination of the film’s terrific reviews and the novelty of the screen meant that the showing was almost full. 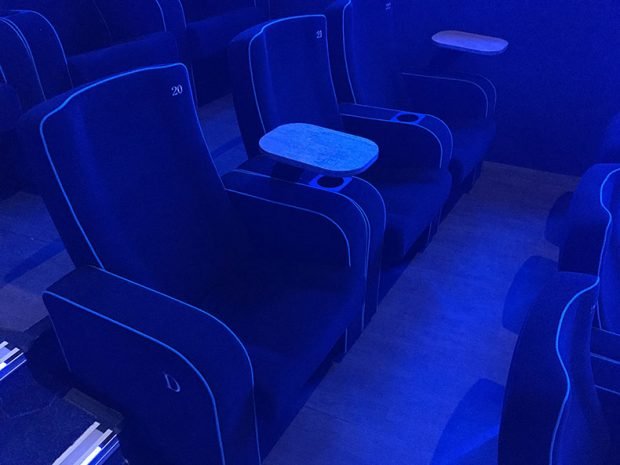 The seats in the new Screen 9 (below) are huge. Coupled with the size of the screen and the loudness (and boy, is the sound amazing), you’ll sink into a world of your own. Those of us with an Infinity Card have to pay a ?5 premium for films on this screen, but that’ll be well worth it for the big blockbusters, especially those made for IMAX, like Dunkirk. For regular cinema-goers, the premium is a little less (I think), so expect to pay the thick end of ?15 at prime times, although it’s cheaper during the day and there are various cinema offers around. I’ve already scoped out my favourite seats (as I have with all the screens at The Light), but that’s one thing I’m keeping to myself for now – sorry!

My photos above don’t really do the IMAX screen justice, but the Cambridge News has some better ones.