The full proposals for the two huge new housing estates on Wort’s Causeway have now both been revealed, and it won’t surprise anyone to know that they leave a lot to be desired.

Housing developers are in business to make a profit, so they’ll only offer the minimum amount of amenities and infrastructure that their eventual house-buyers will expect. If they can offload any requirement for provision of local facilities to the rest of the neighbourhood, they’ll do so.

The developers will therefore be expecting our council to demand better, and we need to make sure it does. Indeed, I understand that the first of the two proposals (GB2) is already having to be re-thought.

As a reminder, here are the two new estates. I’m not sure anyone’s ever tried to show the actual proposed layouts in place before, but I’ve given it a go. Click on the illustration for a bigger version. 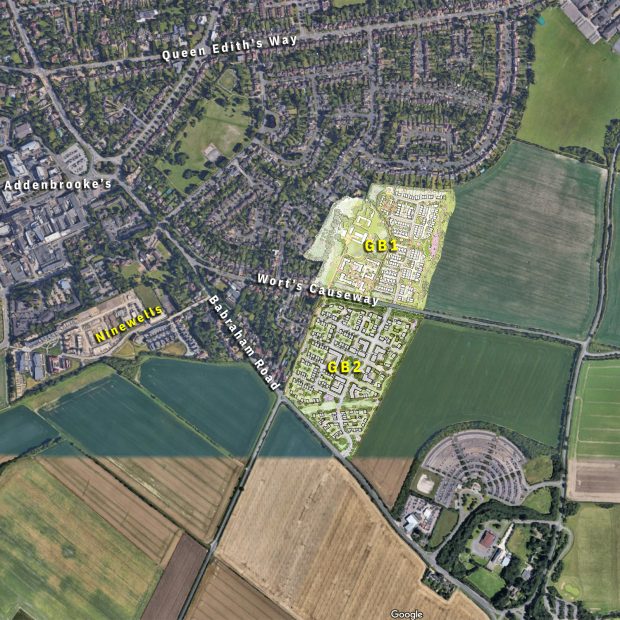 The main problems arise with the inherent unsuitability of the location for new housing. Back in 2013 and 2014, when some bright spark came up with the idea of building on Wort’s Causeway, a large group of Queen Edith’s residents got together to put forward an irrefutable list of the site’s deficiencies. As so often happens, the clearer their case became, the more defensive the council became about its Bad Idea.

Inevitably, objecting was pointless anyway. When the ‘Local Plan’ that included the idea of 400 new homes on Wort’s Causeway was eventually ‘debated’, the councillors just voted on party lines – as they always, always do. The plan had been developed on the Liberal Democrat councillors’ watch, so the two Liberal Democrat councillors from Queen Edith’s voted for it, against the wishes of so many of their residents. Queen Edith’s had a Labour party councillor back then too, but the Labour party line was to abstain on the plan, so even she didn’t vote against it. Only a lone independent councillor from the other side of the city was as aghast as local residents and voted to reject the plan.

We can divide the problems of the Wort’s Causeway housing estates’ plans into three.

Despite Wort’s Causeway splitting the combined site down the middle, the road itself is hopelessly inadequate to provide access. It has therefore been agreed from the outset that vehicle access into Wort’s Causeway should not be permitted at busy times, and therefore a separate entrance to the estates must be provided. So at busy times, the only permanent vehicle access will be this single entrance, on the south side of GB2, onto the busy and usually congested Babraham Road. Any GB1 or GB2 resident travelling into the city or to Queen Edith’s by car at those times will therefore have to head south through the estates, then turn right on to Babraham Road and proceed up to Addenbrooke’s roundabout. At least that tortuous journey should dissuade some people from doing it! However, be prepared for the new residents of GB1 and GB2 to start campaigning from day one to be given 24-hour motor vehicle access to Wort’s Causeway.

The developers are able to claim that the closest ‘local centre’ (Wulfstan Way shops) and primary school are under 1km away, by measuring as the crow flies. In reality, by road, these places may be 2–3 times that distance.

In order to gloss over the inescapable deficiencies of access, the developers have had to make much of the open pedestrian and cycle access to Wort’s Causeway, but even with this, to get to Queen Edith’s, hundreds of pedestrians and cyclists each day will need to wind their way through quiet, residential Field Way and one of two wholly inadequate alleyways to Rotherwick Way or Almoners Avenue. For some residents, even on foot, Wulfstan Way shops will still be a 2km journey.

As mentioned above, no developers are going to offer to build a properly liveable neighbourhood unless they’re forced to. It’s expensive to do that. So the plans just assume that the new estates will use the area’s existing facilities, such as Wulfstan Way shops, the Queen Edith Medical Practice, Queen Edith Primary School, Netherhall School and buses on Babraham Road. They’re even cheeky enough to mention the shops at Addenbrooke’s hospital as if these were designed to be a neighbourhood amenity. Have we learned nothing from the Ninewells development?

The school situation is worse than it seems, with the closest existing schools currently unable to provide what may be a requirement for 90 pre-school places and 135 primary school places, as this article points out. Cherry Hinton schools are up to 3km away.

Local eyes will surely roll heavenwards at a fall-back statement for GB1 that “in the event that those development proposals do not include an on-site community facility, all monies received shall be expended toward the provision / improvement of facilities at Nightingale Recreation Ground Pavilion”. That would be the pavilion that we’ve already been promised for over four years, would it?

As you’d expect, the developers spend a lot of time talking about how they want to put sustainable transport first. Nothing demonstrates progressive credentials more than great facilities for pedestrians and cyclists. But the reality of these plans, like almost every other modern development, is that movement and storage of motor vehicles still takes priority. We shouldn’t be seeing shared foot- and cycle-paths, speeding-inducing 5.5m wide carriageways, or non-segregated footpaths that are almost begging to be parked on by inconsiderate drivers. Any developer can do so much better, and should be forced to do so.

As a community and via our council, we need to insist on improvements. And, it should be said, the developers will expect us to do so. That’s the way the game is played, isn’t it?

I would like to see an investigation into the possibility of direct access from the estates to Netherhall School on Queen Edith’s Way by creating a footpath and cycleway around the back of Beaumont Road. I know several residents have raised this, but we don’t know if anything was ever done about it. I’d like to see better amenities on the sites, with an insistence on shops and takeaways, and a better explanation of the proposed school arrangements. I’d like to see the designers use the Manual For Streets and listen to suggestions from the likes of the Cambridge Cycling Campaign and Smarter Cambridge Transport. And I’d like to see more reaction to the many other good ideas submitted at public consultations which so far appear to have been ignored.

Finally, the City Council may no longer be run by the Liberal Democrat party which gave us this plan, but in Queen Edith’s we still have Liberal Democrat councillors who I hope will take responsibility for it.

Note that there are currently no closing dates for comments.

6 Replies to “The new Wort’s Causeway housing estates: what now?”