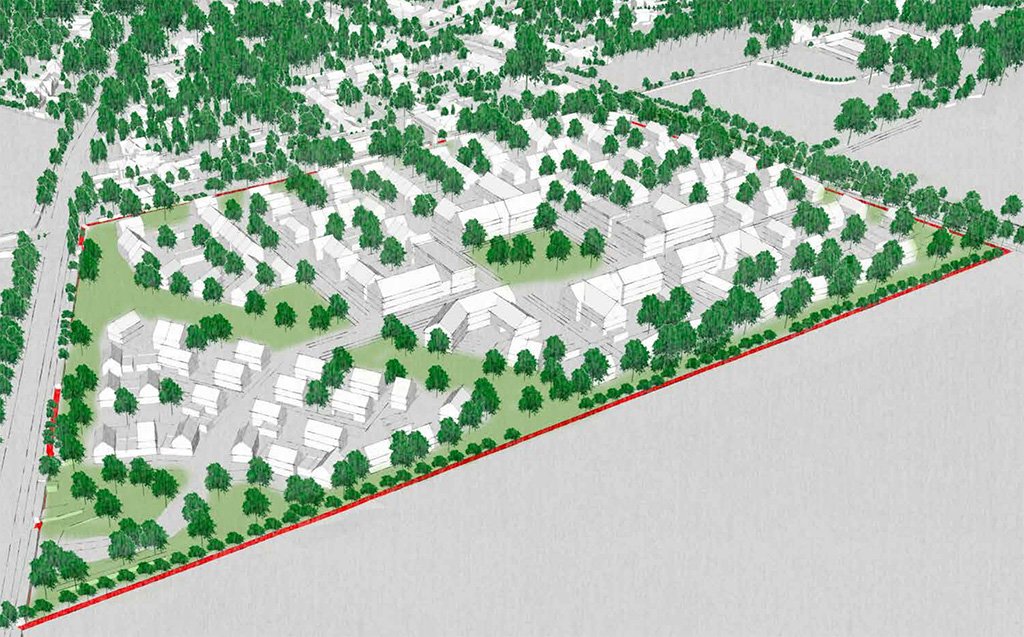 The planning application by ‘This Land’ for the southern half of the huge new housing estate off Worts’ Causeway, formerly known as ‘GB2’, is now available for our inspection. There’s a lot to read, but I think many residents will want to do so, and thoroughly. We have until Thursday 17 Oct 2019 to comment on the plans.

‘Newbury Farm’, as GB2 is to be called, stretches from Worts’ Causeway down to Babraham Road, the lower right hand area in the illustration below. It will contain 230 homes. 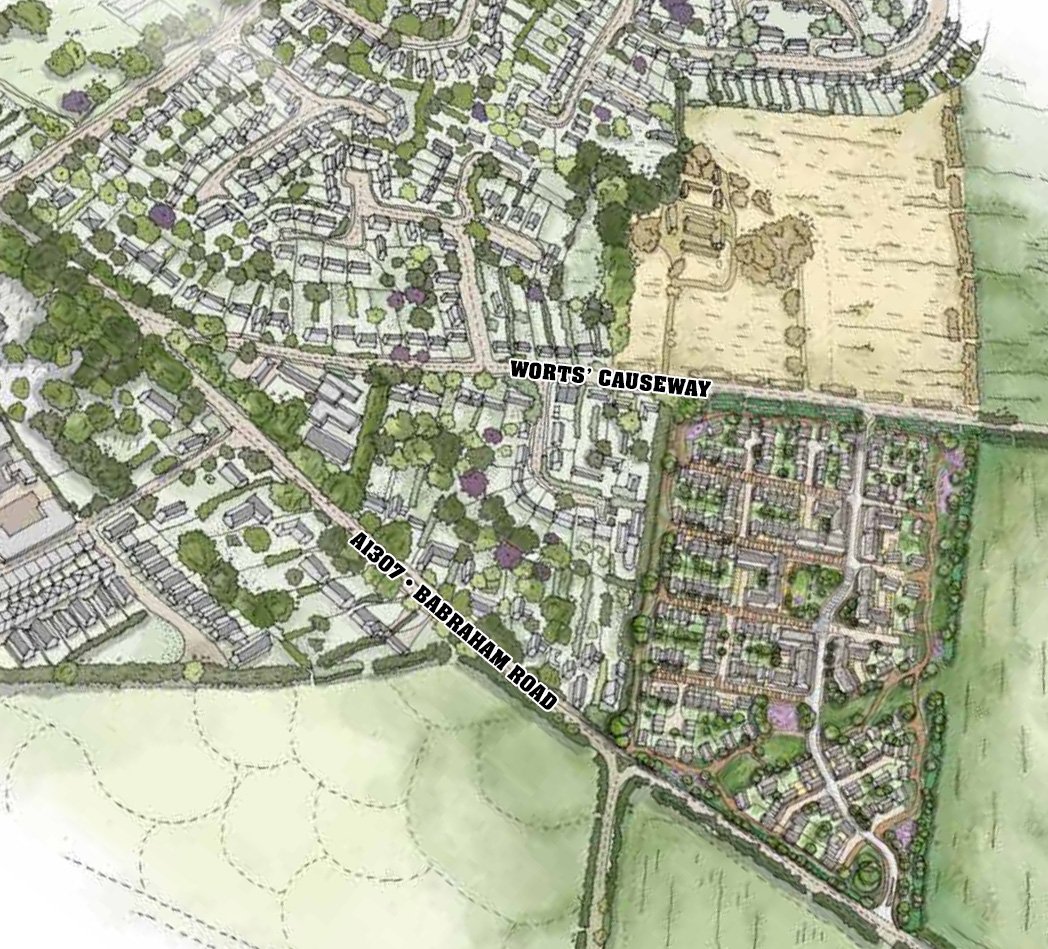 One of the first things you’ll notice is the arterial road running right through the site. This is to provide access all the way from Babraham Road to the northern of the two Worts’ Causeway developments (‘GB1′), shown in yellow. It’s planned to forbid entering or leaving either estate onto Worts’ Causeway at ‘restricted times’, using some sort of numberplate recognition system. During these times, the entrance on Babraham Road will be the only way in or out of both estates.

As GB1 is similarly sized (although its plans are still to be detailed), this means there’ll be a lot of traffic on Newbury Farm’s arterial road in the ‘restricted times’. Dozens, if not hundreds, of cars might be trying to get out of the one entrance on Babraham Road during the morning peak, many of them wanting to turn right and join the solid queue heading into Cambridge. It worries me that whatever the Worts’ Causeway no-entry times are, they could eventually be amended or cancelled, letting traffic use that route instead to slightly relieve the chaos.

The road crossing Worts’ Causeway will require significant hedgerow to be removed, which is concerning a number of people for serious environmental reasons. You can read some of these comments already on the council planning application website (details below). One local resident tells me: “This Land’s plans do not make the environmental impact very clear as the documents are not all labelled on the online portal. Without reading several huge documents you can’t see the effect that the removal of such a large section of essential green corridor, habitat and food source would have for the 7 species of bat and 14 bird species on the RSPB Birds of Conservation Concern red list. The Environmental Impact Assessment, which many local residents requested be included during the scoping phase, says that the northern hedgerow in particular was identified as being important, supporting the greatest bat activity and species diversity of the site.”

I have an issue with the isolation of both GB1 and GB2 from Netherhall and Cherry Hinton, particularly for pedestrians and cyclists. This is because the children of GB1 and GB2 are expected to go to school there, as Sam Davies has explained.

Obviously cycling or walking to Netherhall and Cherry Hinton via Addenbrooke’s or the Lime Kiln Road hill are both non-starters. There’s a cut-through from Field Way and Bowers Croft to Almoners Avenue and then Queen Edith’s Way, which would probably be the preferred route for most of the 200+ children on the two estates, but it’s still circuitous, and it would not be popular with residents.

Creating a cut-through from GB1 to Almoners Avenue looks possible. But best of all by far would be a new cycleway tracing around the back of the Beaumont Road housing, marked in yellow below. While this would probably be best pursued as part of the GB1 development consultation coming later, good separated cycle access from any part of GB2 to Worts’ Causeway (from where it can continue through GB1 to the new cycleway) would be an intrinsic part of this route, and should be raised now. 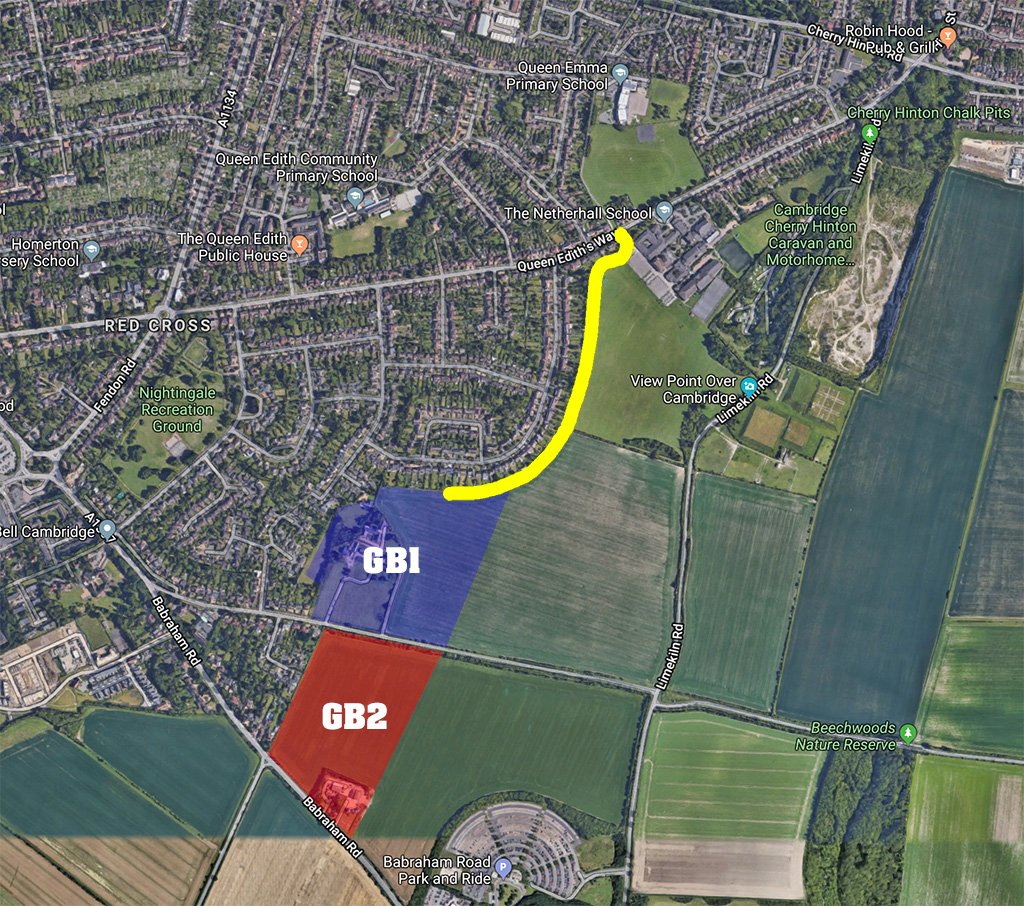 It’s important that as many of us as possible have a read of the Newbury Farm planning application.

One Reply to “Plans for ‘Newbury Farm’ development released”