Here’s a follow-up to my recent mention of the proposed demolition of the house at 291 Hills Road (‘Raylands’) and its replacement by a modern collection of flats. This has motivated many local residents to organise in opposition to the plan. Details of how to support them are coming up. I think that many locals have been distressed at the ease in which the same developers recently received permission to demolish Nos. 3 and 5 Queen Edith’s Way in order to cram six houses into the site previously occupied by two ? and the prospect of this being the start of a domino effect.

The Hills Road Area Residents Association tells me that it is working closely with the Queen Edith’s Way Residents Association and they are getting excellent professional advice. They have collected enough signatures for a Development Control Forum, have had productive conversations with council officers, and have obtained an extension to the original deadline for public comments.

It’s disappointing that a community has to organise in this way to ensure that its own council gets a message, but let’s hope they do. I think it’s fair to say that most of us don’t want to see any long-established buildings wantonly destroyed for private gain, and we certainly don’t want them to be replaced with ungainly ultra-modern architecture which does not blend in with the locality. It’s all very well to say that more people need housing, but the number of unsold and empty flats in the locality shows that the sort of developments being proposed are not what’s needed. We need councillors’ support here.

A few years ago, the City Council’s planning was taken away from the local councillors’ ‘area committees’ (not that it was ever done that well there) and taken to a central, city-wide committee. If this put decisions in the hands of councillors who might actually have more of an interest and expertise in planning issues, that would be a good thing. But now the worst has happened, at least for our area: the committee has been stuffed with members from the other side of the city. Not one of the eight members comes from the south of Cambridge: not from Cherry Hinton, not from Trumpington and not from Queen Edith’s. The best we can hope for is that our local councillor Jenny Page-Croft gets a call-up (I understand she is a reserve who often manages to attend). Otherwise we’ll have decisions on the future of our area decided by councillors from Chesterton and Kings Hedges who probably have little interest in Queen Edith’s. We will have to rely on one of our local councillors volunteering to attend and take up a particular case at a meeting, and that brings with it the inevitable party political dangers. However, it’s where we are.

So, what’s next? Campaigners have produced this leaflet (click to read): 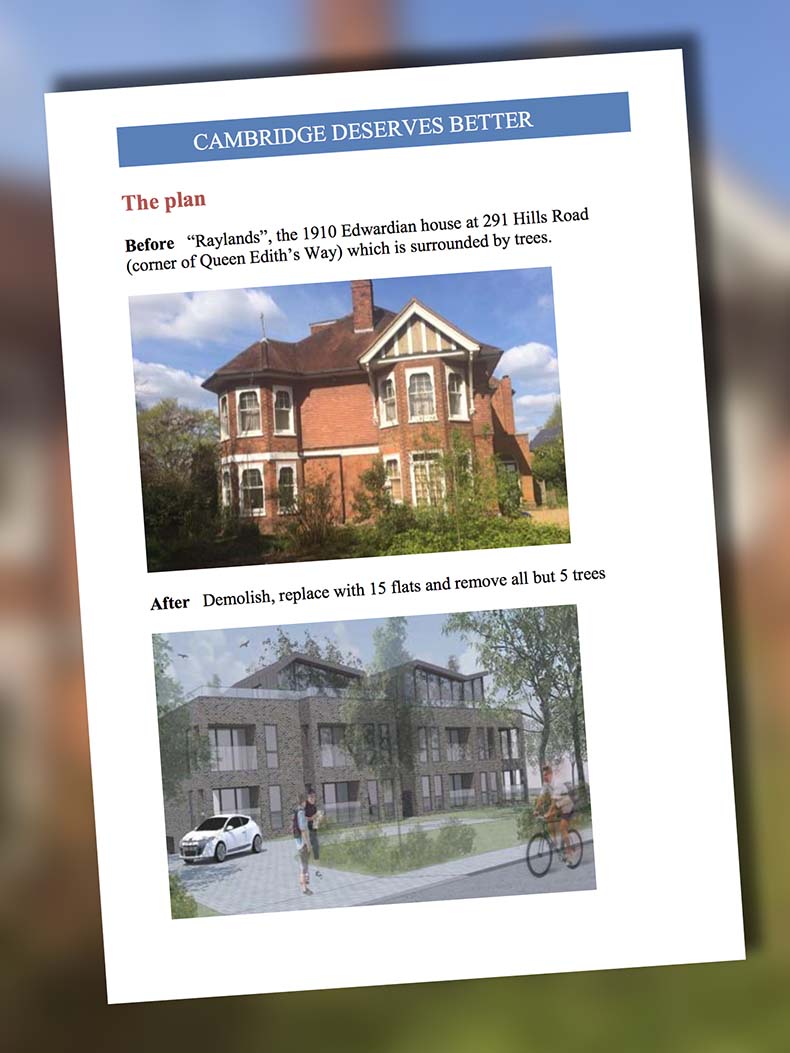 The leaflet explains how to add your own comments to the council, but in essence you can do it online here. You’ll need to create an account if you don’t have one. Or just write an email to the Senior Planning Officer, Charlotte Burton, making sure to quote the reference 17/1372/FUL.

You can see many of the comments already made by the public here. You can see all the documents relating to the case and any other comments here.

We thought the councillors on the planning committee might be more sympathetic than they were to public objections to the demolition of Nos. 3 and 5 Queen Edith’s Way. That case was left largely to a group of horrified neighbours, and it was brushed aside. Now the same developers seem to want to pick off more local houses, one at a time, we need to make our case even more forcefully and from a broader area. It could be your neighbour next, and what’s worse, it could be something horrible.