The campaign by local residents to save the large house on the corner of Hills Road and Queen Edith’s Way is proving to be a model of how people can get together and say what they want in their community. But of course, housing developers tend not to care about what local communities want ? and the councils which make the final decision often side with the developers. So if you care about this landmark campaign, please read on and get involved, even if it’s only by sending in an email.

?Raylands? is the 1910 Edwardian house at 291 Hills Road which is surrounded by trees. I wrote about it last year, here and then here. Its history is covered on the Capturing Cambridge website.

A local company, Gibson Developments Ltd, wants to demolish the house and replace it with a modern block of flats which anyone would agree is not as in keeping with the area as the existing house. These people are also behind the demolition and replacement of the houses at 3 and 5 Queen Edith’s Way. After that was waved through by the City Council’s planning committee, local residents decided to get more organised about trying to save 291 Hills Road from Gibson Developments, and have come together under the ‘Cambridge Deserves Better’ banner. Support has come from many unexpected places, and over 100 objections have been submitted to the City Council, which must be some sort of record.

This is not NIMBYism. Many of the supporters of the campaign (including me) accept that we have an affordable housing shortage in the area. But demolishing properties in good condition to squeeze new ones on the same plot is not the way ahead. More half-million-pound flats is not what the area needs – there are plenty of unsold examples of those. The developer hasn?t explored options to retain, convert and extend 291 Hills Road, which could remain a large family home or be converted into more affordable flats. Every old building which is allowed to be demolished is another example for future speculators to point at. This is about retaining some sort of character to the area.

Below is a new, 3-page leaflet from the campaign to save 291 Hills Road. Please print it out and give it a read. The guide gives you some genuine reasons to object to the demolition of this house. Even if you’ve already done so, you can update your response or others in your household can add theirs. Objections can be added to the City Council website, sent in by email or by conventional post. We only have a couple more weeks to make our voices heard, so do make a few minutes to do so. Remember that ? disgracefully ? there are no councillors from the whole of the south area of Cambridge on the planning committee, so we’re appealing to people over who we have no electoral influence. Our arguments need to be technically sound, and the leaflet is a good guide to this. 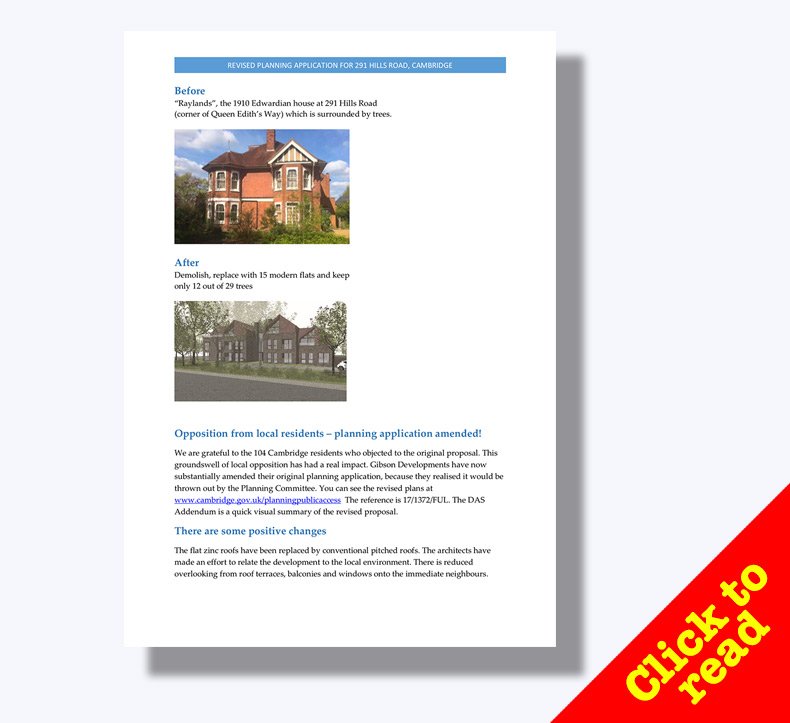 The key illustrative guide is probably the one titled “DAS ADDENDUM”. It wasn’t available earlier so I made a copy here.

The best people to contact with further questions and comments are:

As well as commenting to the council, please feel free add any information and thoughts which you have in the space below for other local residents to read.

One Reply to “Campaign to save 291 Hills Road: the latest news”