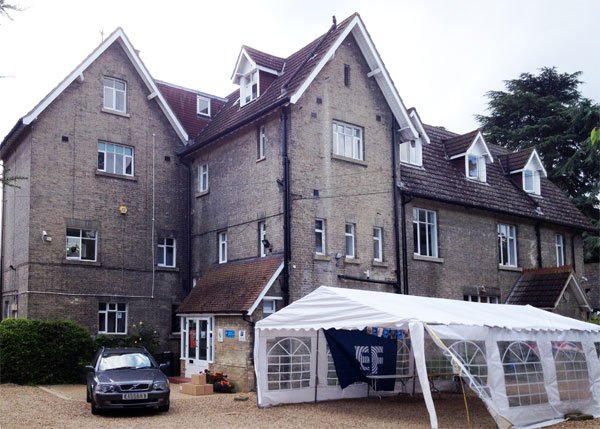 The building at 221 Hills Road has a fascinating history. It was constructed in 1887, at the same time as the first of the Cavendish Avenue villas, which were being designed as nouveau-riche showpieces for affluent city tradespeople. 221 Hills Road was a curious scheme, from an engineer – James Lyon – who built it as a “Mechanical Workshop”: a working-class residential apprentice school for upmarket building trades, such as woodwork and plasterwork. The extensive garden (now Lady Jane Court) contained a full-scale saw-mill. The land across Cavendish Avenue was also part of the property. It was, in a way, an attempt to create something alternative and complementary to the university, not unlike Cavendish College (Brereton’s “County College”) on the other side of Hills Road, which opened in 1877, went bankrupt in 1892 and was sold for almost nothing to re-locating Homerton College in 1894.

The “Mechanical Workshop” never happened, and Lyon left with the house unfinished (the top floors in particular) but with lots of fancy linenfold and pitch-pine panelling etc. But it had running water in all ground and first floor rooms, all beautifully encased in wood.

Then the building, always called “Strathmore”, was briefly from 1891 Strathmore Ladies School (Mrs Thomas Pearson Walker, proprietor), with private boarding, as would later be other Cavendish Avenue villas. By 1898 it had been sold to Alexander Macintosh Jnr, a wealthy city ironmonger, who moved from Brooklands Avenue.

In 1902, the building was bought by George Parker Bidder III, father of Anna McClean Bidder, Founding Fellow of Lucy Cavendish College. He renamed the house “Cavendish Corner”. Bidder was a very wealthy zoologist and created a nature reserve, tennis courts and gardens (including across Cavendish Avenue). With its 23 rooms, the house was a lot for the Bidders and their only unmarried daughter. George’s architect brother opened the remaining floors in 1913, adding bathrooms etc; and George used all this as a free open hostel for relatives visiting patients at the Strangeways rheumatism hospital (off Nightingale Avenue). Anna later recounted that the telephone number was Cherry Hinton 2! She also said that between the wars, with Hills Road unpaved, the front garden was often white with dust from undergraduates racing motorbikes to Wandlebury and back.

During World War II, 221 Hills Road was open house again, this time for army officer billeting. Some 65 of the 70 windows were painted black.

George died in 1953, and Anna first built two flat conversions, living upstairs herself, while letting the ground floor to families, in keeping with her charitable Quaker principles. By 1955 she had built 2a and 2b Cavendish Avenue opposite, on the garden/tennis courts extension, for herself and a companion, Elfriede Allen, a famous handicapped violinist. When she eventually moved across, she sold the house to the Roman Catholic Church, and it resumed its role as an educational institution. It was first used for the Irish Teaching Order, the Christian Brothers, through to the late 1960s, then subsequently by St Mary’s Convent School as a boarding house for girls. EF Education First has been at 221 Hills Road for 35 years, having acquired the property in the mid-1970s.

Anna Bidder left the 1950s properties 2a and 2b Cavendish Avenue to Lucy Cavendish College, and that site was redeveloped in 2010 as three houses.

(With thanks to Michael Holdsworth)

2 Replies to “The History of 221 Hills Road, Cambridge”