The recent introduction of a Residents Parking Zone in the “Morley Area” highlighted one glaring error: the failure to plan for the knock-on effects on neighbouring roads. While Cavendish Avenue has taken the bulk of the predictable displaced parking, it’s a wide road, and while inconvenient for residents there, the more serious impact has been in the narrow Baldock Way. Every last inch of the short stretch between Blinco Grove and Cavendish Avenue is now taken up with pavement parking during the day, and in the stretch between Cavendish Avenue and Hills Avenue, the grass verges have become a public car park too. Some of these were reinforced at great expense a few years ago and have already been ruined. 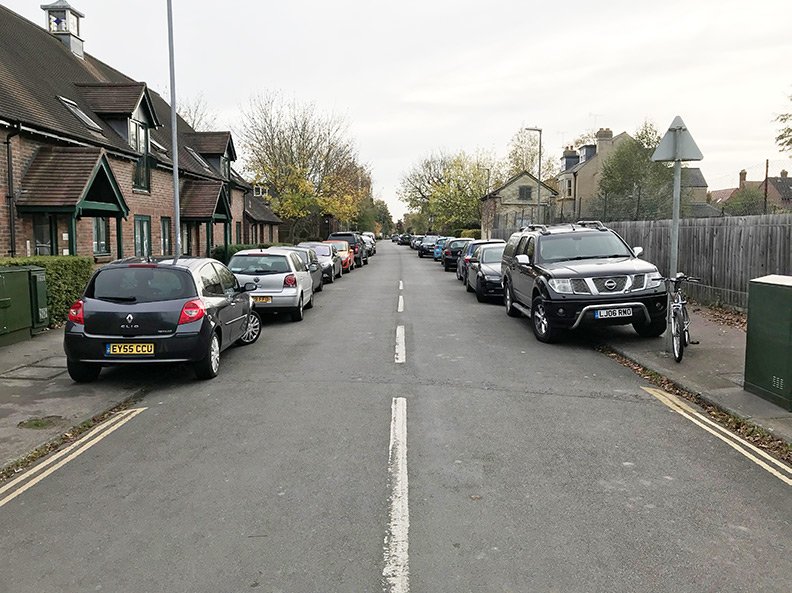 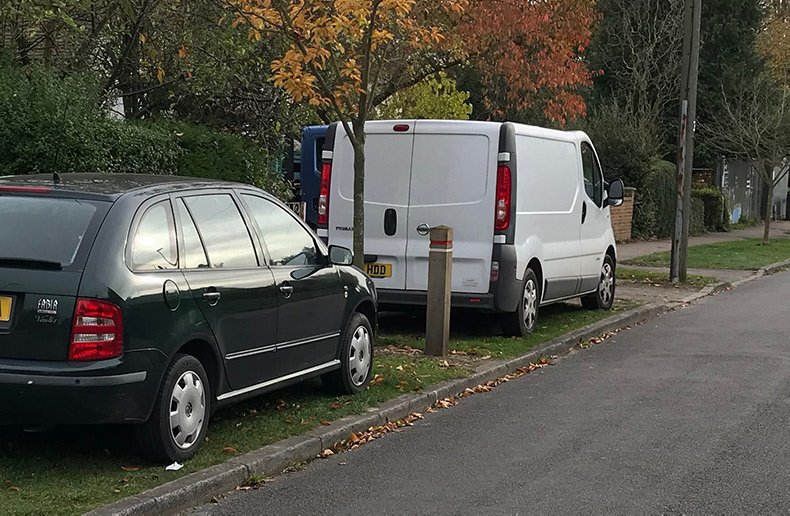 Needless to say, the parked cars make walking and especially cycling difficult, which is an issue opposite a primary school, and another reason to discourage parents from getting children to school by foot or bike.

However, a surprise proposed new section of double yellow lines has been unveiled by the county council for the stretch of Baldock Way between Blinco Grove and Cavendish Avenue. ‘Surprise’ not because it was unexpected, but because it’s been announced so soon after the problem was identified. As many residents know, these things can ? and usually do ? take many years of requests to get implemented.

What appears to have happened is that there were new yellow lines going through the planning system for the Hills Road end of Cavendish Avenue, and the Baldock Way lines have been added to this plan. Here then is the proposal, which was provided to our county councillor Amanda Taylor this week (click to enlarge): 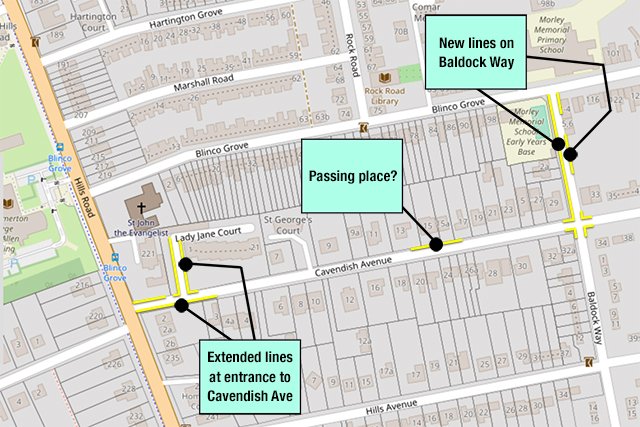 On Cavendish Avenue, the idea is to extend the double yellow lines a short way down the road from the existing ones, which only really cover the entrance to the road. This will allow safer entrance and exit to Lady Jane Court, which will also have double yellow lines down to its garages. There’s a mysterious gap opposite the entrance to 2/2a/2b, which councillor Taylor has offered to investigate. Halfway down this part of Cavendish Avenue is another short stretch of double yellow lines ? there’s no explanation, but we think it may be to ensure there’s always a ‘passing area’ when there are cars parked on both sides of the road.

Finally we get to Baldock Way, where there are to be double yellow lines on the west side all the way from Cavendish Avenue to Blinco Grove, and on the east side for part of the way. This was welcomed by residents and will I’m sure be welcomed by parents and staff at Morley School. The pavement parking on Baldock Way does not appear to be anything to do with the school, but is believed to be railway station commuters (despite it being a good 15-minute walk) and Hills Road Sixth Form College students.

Unfortunately this will not solve the problem in the southern sections of Baldock Way of parking on what were grass verges but are now becoming mud heaps. It will also not rid Cavendish Avenue of some new ‘ultra-long-term parking’, believed to be rarely-used second- or third-cars from houses in the Morley Area. One resident has reported having had the same car outside her house for three weeks.

It is unlikely that the county council will implement any remedies on the street. The whole city is steadily being consulted, area by area, on introducing Residents Parking Zones, with the eventual intention that – if residents want it – parking across the entire city will be for residents. Given that the Cavendish Avenue double yellow lines took over 10 years from the issue first being raised, any requests for more double yellow lines now probably wouldn’t happen before matters were overtaken by the introduction of a Residents Parking Zone. However, it would be nice to see something done to protect the Baldock Way grass verges from antisocial drivers.