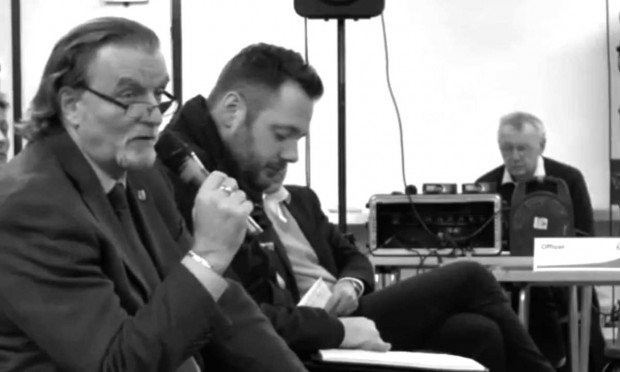 Monday night’s council “South Area Committee” meeting at St John The Evangelist Church was not that well attended by members of the public, perhaps in part because of a lack of any controversial issues being discussed. The street parking meeting at the same venue a few weeks ago had, after all, attracted over 60 residents. Those who did attend this week’s event, however, heard what the Cambridge News described as a “blistering attack” on many local transport initiatives by Stagecoach bus chief Andy Campbell (above, left). It was a presentation which pulled no punches from the self-confessed “blunt Yorkshireman”.

Mr Campbell said: “In terms of the worst decision ever made, I would say that was the park and ride. We lost half a million customer journeys a year from the decision to charge for parking cars. I don’t believe that we’ve lost all those customers because of the ?1 charge; I believe it’s the complicated, ridiculous ticket machines that you’ve got to be a Cambridge Don to understand. Every time I go to a park and ride site and use that machine, somebody comes up to me and says: ‘Can you help me to do this?'”.

Many of those people who no longer use the Park and Ride, of course, now park in the streets of Queen Edith’s. If you want to vote out the councillors who decided on this stroke of genius, hard luck ? most of them come from villages far away from the city.

I was going to report on what Mr Campbell said here, but Jon Vale in the Cambridge News produced a terrific article which I couldn’t possibly top, so I suggest you read that if you’re at all interested in the state of public transport in the city. Local video blogger Antony Carpen recorded things too – here it is.

On Tuesday, the County Council’s Highways & Community Infrastructure Committee voted to delegate the responsibility for deciding its own Traffic Regulation Orders to the Greater Cambridge City Deal Board. If that sounds a bit obscure to you, congratulations on being a normal member of the human race, but it’s another symptom of how the “City Deal” and council officers are steadily accumulating powers normally subject to greater public accountability. Some local organisations are becoming a little concerned about this.

I wrote to Queen Edith’s county councillor Amanda Taylor to make her aware of my own reservations about what’s going on. I was not alone. Ms Taylor tells me that she subsequently voted against the move because she “does not think the City Deal Board has the local knowledge required to decide on-the-ground matters such as parking restrictions”, she finds their consultation and engagement record poor, and says that “for them to decide their own traffic regulation orders has an intrinsic lack of objectivity”. She concluded: “We would prefer to have them assessed and determined ? like any other traffic matter in Cambridge is ? by the city traffic committee, comprising 12 councillors representing city residents.”

However, despite the committee’s Liberal Democrat, Independent and UKIP councillors all voting against the proposal, a slightly amended version was voted through by an odd alliance of Conservative and Labour councillors.

With all the talent available in this city, it’s disappointing that the City Deal, which is primarily ?100M of government investment in our transport infrastructure, should end up in the hands of a predictable bunch of ‘the great and the good’. But perhaps we shouldn’t be surprised. The result has been the emergence of some significant residents’ groups expressing alarm at what’s being proposed, in the west of Cambridge and in the north.

A while ago I offered my services to an organisation which has been set up to offer more imaginative ways of solving the city’s transport issues. Smarter Cambridge Transport describes itself as “the initiative of a group of local people who are developing and promoting a modern vision for integrated transport in Cambridge and the surrounding region.” Its immediate focus is on “ensuring that the Greater Cambridge City Deal money is spent in the best possible way.”

One Reply to “Recent thoughts on the city’s transport scene”