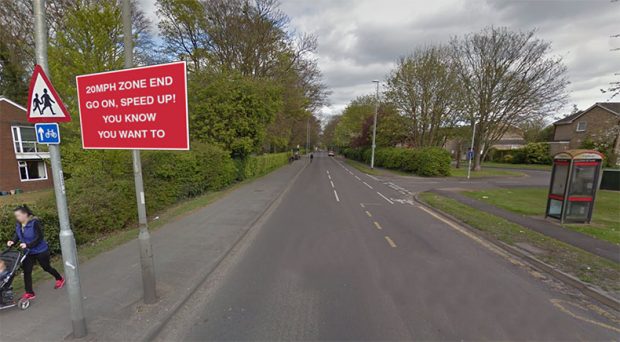 At the council’s South Area Committee meeting on Monday night, we had an update on the city’s 20mph speed limit implementation from the council officer concerned. The good news is that the reduced speed limits are finally being put in around Queen Edith’s over the next three months, which means that we’ll no longer have the temporary anomaly of main roads being restricted to 20mph, and minor side roads still being 30mph. This is the ridiculous situation that we see, for example, when turning into Hinton Avenue or Blinco Grove from Cherry Hinton Road. In response to a request from Councillor Taylor, the council officer promised that these junctions would be dealt with urgently.

Not all the news was good, however. The council officer announced that the 20mph speed limit on Cherry Hinton Road is not going to run all the way down to the Robin Hood junction, but will stop at Walpole Road by the BP petrol station. This, apparently, is because “it’s all that ‘county’ and the police will allow.” I’m not sure what ‘county’ is in this case. He could not offer much more of an explanation, other than that the character of the road changes there into a less urban environment.

Going out of the city therefore, we have a situation where traffic is invited to speed up just as it approaches Cherry Hinton Hall Park and the alleyway opposite, an area where children are frequently crossing. This is alarming, and councillors seemed unanimous in saying so. It was not what they intended when they discussed the 20mph zones last year. The (city) council officer suggested that it had taken a lot of work to get this far, and we should be grateful to have achieved this much. He said there might be a chance to improve things in the future.

It does make you wonder what the point is of making democratic public decisions, when faceless county council officers will just do their own thing anyway.

The city council has a slightly outdated web page about the 20mph project here.

Political games which serve our residents so badly

It’s less than 18 months since the farcically bad South Area Committee meeting where the roads to be recommended as 20mph zones were discussed. If you remember, Queen Edith’s Way was designated to join them based on a vote where 7 out of 9 councillors abstained.

Since then, the standard of South Area Committee meetings has improved out of all recognition, largely – in my opinion – thanks to the best Chair I’ve known at this event, Councillor McPherson from Cherry Hinton. So it was hugely disappointing that other councillors (including our own from Queen Edith’s) have now taken the first opportunity they’ve had to vote him out of the chair. As usual, this was done purely out of party political spite. Our own Councillor Pippas was voted in as the new Chair and I wish him well, but it’s all part of the political games which serve our residents so badly.