Having been to the exhibition about the proposed Hills Road cycle lanes tonight, I feel a little more informed about what’s happening. If you couldn’t make it, but are interested, there are further exhibitions on Friday 14th March at lunchtime, in the foyer at Addenbrooke’s; and on Wednesday 26 March in the evening at the Perse School. The planners are extremely keen to get feedback from the public, but I do feel the public doesn’t really have enough to go on, which is no fault of the planners. For example, the bus stop designs are radical, but as they’re already in use in other places, I feel we should be guided by experiences there, not by the gut feeling of people who’ve looked at a poster.

I won’t describe the whole scheme, as there’s a perfectly good brochure from the planners (click on the image below). I think it will be a great improvement to the flow of traffic on Hills Road, without detracting from what is a very pleasant streetscape. The “floating” or “island” bus stops might cause confrontations between cyclists and pedestrians getting on and off the bus, but it’s just a different problem to the mixed-use paths we have at present. With the constant influx of students and visitors we have in Cambridge, it can’t be argued that cyclists and pedestrians will “eventually get used to it”, because there will always be plenty of people who haven’t seen the bus stops before – so I think some serious safety signage will need to be installed, whoever gets priority. If anyone can find a video clip of one of these stops in use elsewhere, I’d love to see it. In the meantime, there’s this clip of someone cycling past such a stop in Brighton:

I’d like to see this scheme include improvements to the Hills Road/Long Road junction, where cyclists heading southward to Addenbrooke’s cut diagonally across the junction to ride on the pavement on the west side of Hills Road, avoiding the Addenbrooke’s roundabout when they reach it. I can understand why they do this, and they always will, so the manoeuvre needs to be formalised and made safer.

As for the cycle paths, the main decision to be made seems to be whether to go for a cycle path partitioned off from the road by a kerb and posts, or one which has no barrier (but is wider). A final option mixes the two; although not well explained, the thinking behind this is that it provides a safer (separated) path going northwards, because it’s the morning rush into the city which is the busiest; with the evening traffic being more spread out, there’s less of a need for the separated path going southwards, and this would enable southbound vehicles to move onto the cycle path to let emergency vehicles through. This is a serious consideration on Hills Road, which has several ambulances an hour.

Here’s the brochure, if you’d like a read. All comments welcome. 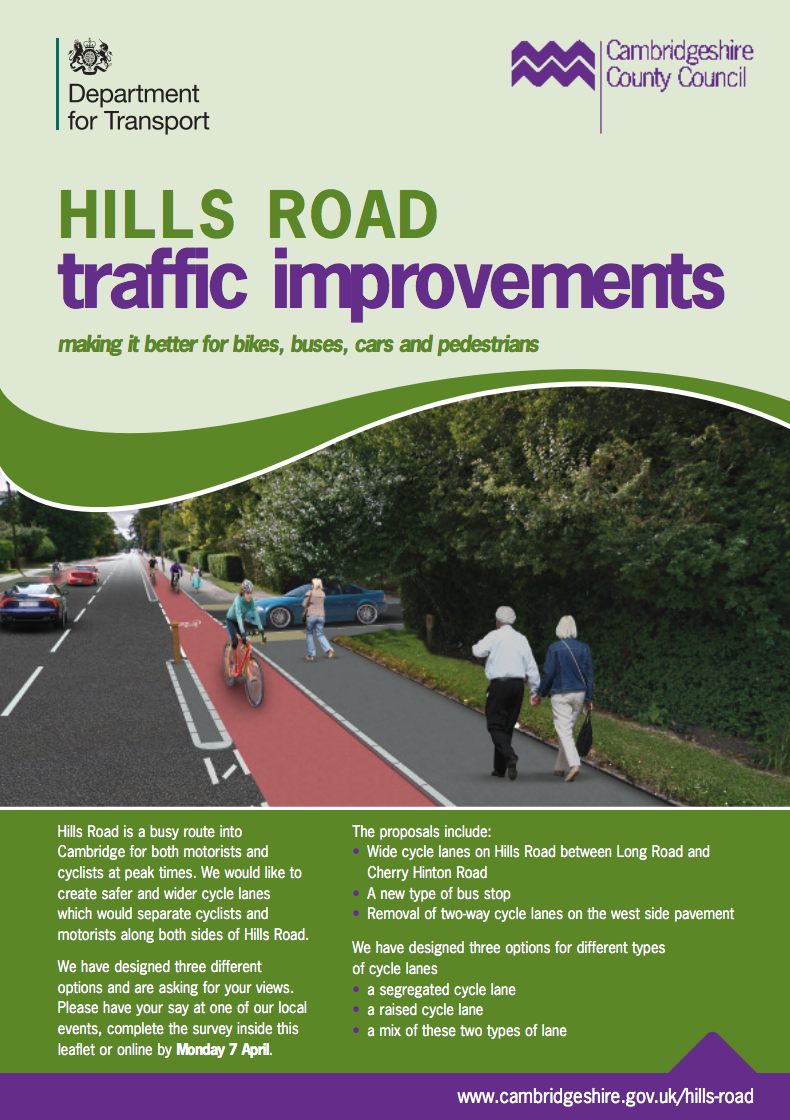 3 Replies to “Thoughts about the proposed Hills Road cycle lanes”