I say “I think”, because as usual, our local councils are keeping us in the dark. Literally, in this case. At the start of the year I wrote about the new streetlighting being installed throughout the county, and warned: “The new lights can be dimmed, or even switched off, remotely. This is going to give councils the opportunity to do just that, and indeed there have already been trials in the area, with inevitable unwanted impact. Some councils elsewhere have moved straight to a midnight to 4am switchoff; if you’ve been to any of these places, such as Colchester, it’s dangerous – and very scary – at night.”

Well, guess what? Although I was unaware, our county council had already taken the decision to turn off our streetlights at night. I’m guessing that few, if any, local residents knew this, judging by the lack of comments on the original article. Readers here are usually quick to point out any such information. And this is not just a Queen Edith’s issue, it affects the whole city and indeed the county.

Even our councillors are only just realising what’s happening:

Really annoyed that the new street lighting in Cambridge will be turned off from 12pm until 6am. Back to the dark ages!

Apparently, the switch-off will begin as soon as the project to replace the streetlighting has been completed, which looks like it may be in a few months’ time. As usual, there was no public consultation on the issue. There have been a couple of fairly low-key stories in the Cambridge News about the cuts, but otherwise, you’d have needed to be an avid reader of the county council committee meeting minutes to know about the decision. (UPDATE: fair play to the Cambridge News, which points out that its original October story was not “low-key”:) 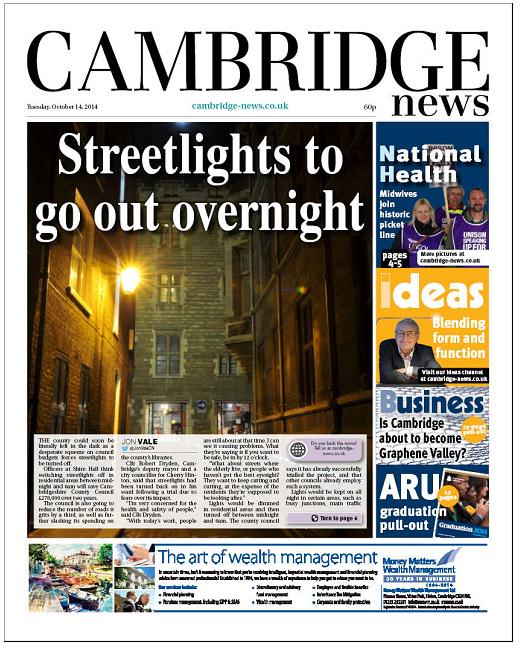 What’s happening, and when?

So what streetlights are going off, between what times, and when? I can’t find out.

The first reference I can find is in the “Highways And Community Infrastructure Committee” minutes from last June, where it was mentioned that “Officers advised that work was still ongoing in this area, looking at proposals such as dimming or switching off street lights from midnight to 5am.” Then, at the October meeting, the plan was given the go-ahead: “A number of members spoke in favour of dimming or switching off streetlights overnight, commenting that this was a win-win situation, as energy costs and light pollution would both be reduced. However, a number of members expressed caution, commenting that whilst this may be desirable in some areas of the county, switching off lights altogether was undesirable in certain areas e.g. city centres, crime hotspots or where there were particular concerns about crime, areas where vulnerable people lived/sheltered housing, key employment sites (e.g. in and around Addenbrooke’s) and areas which had already lost a significant number of street lights.

“It was noted that Parish Councils could pay for individual county council street lights to be retained, at a cost of ?15 per annum, although a number of Members observed that this was not an option in Cambridge as there were no Parish Councils: other members suggested that this option could be considered by the Area Committees in Cambridge.

“The Service Director responded on … the likely process to identify which street lights should be switched off overnight. It was anticipated that around 50% would be switched off overnight, and it was noted that newly installed lights were dimmed overnight, and there had been very few complaints. Major employment sites such as Addenbrooke’s usually had their own lighting and main access roads would most likely be classed as traffic routes and therefore not affected by the proposal.”

No scope for flexibility

Our own Queen Edith’s county councillor Amanda Taylor proposed an amendment “to request officers to investigate whether there was scope for flexibility in identifying street lights to be dimmed/switched off overnight.” This was not even seconded. Another councillor proposed an amendment, which was seconded by Councillor Taylor, to request officers to investigate whether street lights can be dimmed in inverse proportion to the number of street lights lost in that street. This was voted on and lost.

In December, some additional money was made available: “The Committee noted the proposal to provide ?6,000 for street lighting and queried the nature of the liaison with the police and local councils. The Executive Director: Economy, Transport and Environment reported that this funding would provide an opportunity to undertake a simple consultation with parishes, and at the request of the Committee, Area Committees in the City, on the following proposals: retaining the status quo (street lighting until midnight); switching street lights off before midnight (no financial benefit to parishes); and extending lighting beyond midnight (to be funded by parishes).

“Members were informed that officers were costing the possibility of extending lighting beyond midnight in Cambridge city and the market towns in order to serve the night-time economy. Any proposals relating to street lighting would also build in police intelligence. Members were informed that the Central Management System, which was a tried and tested system, needed to be in place first to allow for this flexibility (80% of the County currently had CMS).” There was also a “need to target funding at the city and the market towns, which were used by their residents.”

I’ve contacted Councillor Taylor about the latest situation, for clarification. She replied: “The plan to switch lights off between 12 and 6 has been on the table since last year, and has had press coverage, but it is not worked out in detail yet. It would not apply to traffic routes, but it’s going to hit the smaller streets. All councils’ budgets have been drastically reduced, as the central government grant has been slashed and we are capped, meaning we cannot even raise the money locally if people decide they want to pay extra to protect basic services such as streetlighting and road gritting. Another bone of contention is that rural areas, which most of the county councillors represent, are able to pay to keep specific lights on overnight if they wish to, out of parish council funds, but we in the city do not have that option.

“I moved an amendment at the Highways committee at the time this was debated, to protect streets that have already been hit by light removals ? this was supported by my Lib Dem colleagues and Labour, but were were outvoted by the Tories and UKIP. We had a bit of extra money recently and had to choose where to allocate it (winter gritting or lighting) so I proposed some money be put back into lighting to protect lights at night in areas with a lot of night-time activity, such as educational establishments and Addenbrooke’s, and this did get through.”

The issue was brought up at last week’s council South Area Committee meeting, where the streetlighting contractors Balfour Beatty updated councillors on the streetlight replacement project. They casually mentioned the switch-off, which seemed to be news to several councillors. Under their PFI contract, Balfour Beatty will not only install the lighting, but maintain it for 25 years for an annual fee. The company representatives said that their contract was on the basis that the lights would be dimmed only, after midnight. The amendment to switch them off completely is down to the county council alone. Under the rules of PFI funding, it is almost impossible to change actual contracts once in place, but the switch off proposal could be changed, in theory. Nobody seemed to know which streets would be affected, and the Balfour Beatty representatives appeared to think that some lights were already being switched off.

Why is this not a bigger issue?

I’m amazed, especially with an election taking place, that the plan to switch off streetlights at night has not been a bigger issue. This is effectively a de facto curfew for anyone vulnerable in our society. I can only assume that (like me until last week!), most residents have no idea that it’s happening. I’m annoyed that our county councillors have not communicated this major decision to us, and I’m annoyed that the details are so vague. What are the roads classed as ‘traffic routes’ which will not be affected? There’s been much discussion over a reduction in the number of streetlights in certain roads, but the number is irrelevant if they’re switched off for most of the night anyway.

Above all, has this really been thought through? In Essex, there’s been huge opposition to the switch-off, and many towns are having to put their hands in their pockets to fund the streetlighting to be switched on again. Indeed, the whole policy may be starting to be rolled back slightly. In terms of timing, the proposed switch-off in Cambridgeshire is even more drastic than Essex. Are we watching and learning?

I would love to hear the views of any local council politicians or even parliamentary candidates. Here are a few I’ve already had:

@ChrisRandWrites instinctively it alarms me – could cause real problems and anxiety

@ChrisRandWrites the whole PFI contract has been badly handled by County

@ChrisRandWrites Hi Chris. I'm against. The lights were replaced to energy saving ones before. I think alternate lights on would work better

@ChrisRandWrites However that said Spalding Way had some lights permanently removed making them pitch black at night. Have contacted the CC

@ChrisRandWrites Was done successfully in St. Albans-caused less issues than people feared.Parishes can pay ?15pa 2 keep critical ones on

In addition, Jon Vale of the Cambridge News has pointed to this article, saying:

@ChrisRandWrites there is a bit in there about dimming, switch-off etc, as well as not-much-publicised fact that PFI will cost ?200m

UPDATE 8 April 2015: I’d never suggest that this article perhaps “inspired” the Cambridge News to run a new story on the streetlighting, but anyway, here it is (click to view): 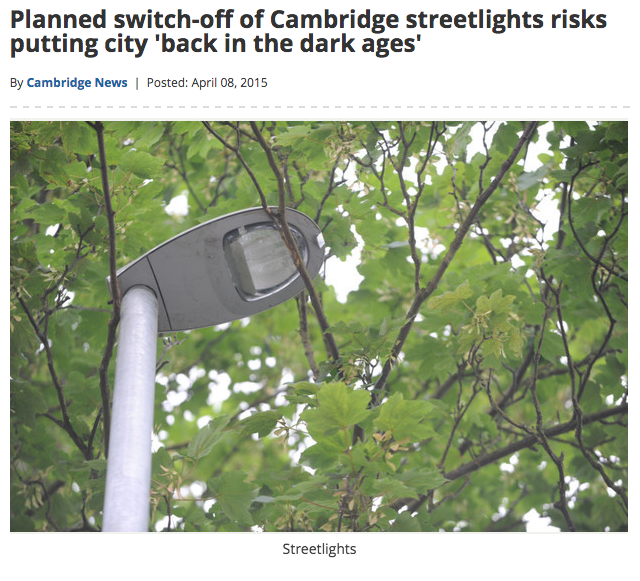 The article says: “While the switch-off has been approved in the council’s budget for this year, officers will now write to district and parish councils to outline the full scale of their plans and give other authorities the chance to save any lights ? providing they cough-up the cash. John Onslow, the county council’s director for infrastructure management, said: ‘What we will be doing is liaising with all the parish councils, district councils, Cambridge City Council, to discuss the proposal and in particular whether they wish to contribute financially if they wish to keep the lights on. It’s important that we are mindful of their concerns. It’s a firm proposal, decision made, but in terms of implementation it’s still subject to that consultation. It’s certainly not a secret process or anything like that.'”

I would suggest that if the County Council wishes to avoid accusations of secrecy that the simple solution is to budget for better communications with residents.