If you haven’t seen it yet, the Cambridge Independent is a major new weekly newspaper for the area, and its fourth issue is out today. In public at least, it claims not to be a competitor to the News, as you’ll hear in the Cambridge TV report above, but inevitably it’ll be competing for the same finite pool of advertising. What’s more, the newspaper has taken on a significant number of former News staff.
Keen to hit the ground running, the Independent has given a opinion column to the Smarter Cambridge Transport pressure group, and I found myself drawing the short straw to produce this week’s effort. I wrote it about this Friday’s Rebooting the City Deal meeting, mentioned here on Monday, and I’ve reproduced it below. The Cambridge Independent is available at the Cherry Hinton Mini Market near the corner of Rock Road, and all other local newsagents. It publishes on Wednesday, and copies are usually around until the weekend. 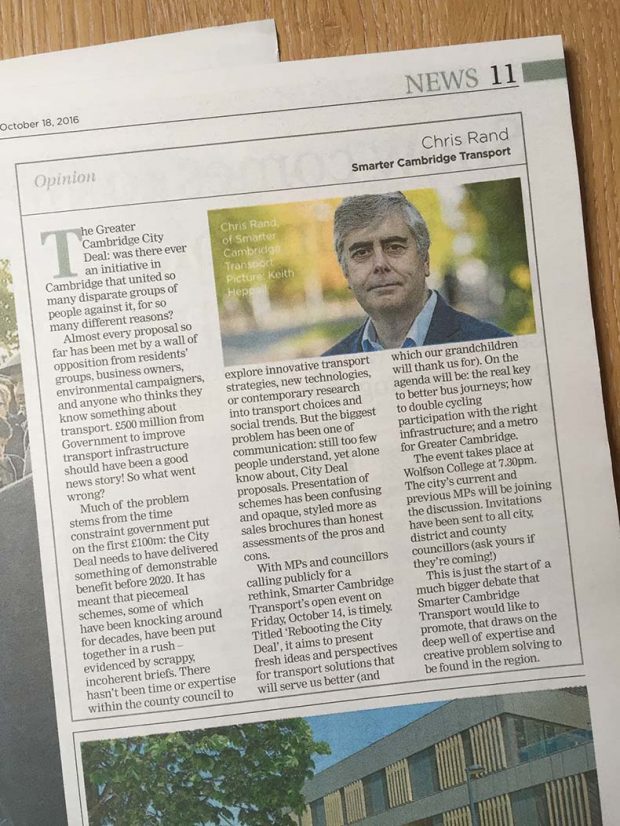 The Greater Cambridge City Deal: was there ever an initiative in Cambridge that united so many disparate groups of people against it, for so many different reasons? Almost every proposal so far has been met by a wall of opposition from residents? groups, business owners, environmental campaigners, and anyone who thinks they know something about transport.

?500m from government to improve transport infrastructure should have been a good news story! So what went wrong?

Much of the problem stems from the time constraint government put on the first ?100m: the City Deal needs to have delivered something of demonstrable benefit before 2020. It has meant that piecemeal schemes, many of which have been knocking around for decades, have been put together in a rush ? evidenced by scrappy, incoherent briefs. There hasn?t been time or expertise within the County Council to explore innovative transport strategies, new technologies, or contemporary research into transport choices and social trends.

But the biggest problem has been one of communication: still too few people understand, yet alone know about, City Deal proposals. Presentation of schemes has been confusing and opaque, styled more as sales brochures than honest assessments of the pros and cons.

With MPs and councillors calling publicly for a rethink, Smarter Cambridge Transport?s open event on Friday 14th October is timely. Titled Rebooting the City Deal, it aims to present fresh ideas and perspectives for transport solutions that will serve us better (and which our grandchildren will thank us for). On the agenda will be the real key to better bus journeys, how to double cycling participation with the right infrastructure; and a metro for Greater Cambridge.

The event takes place at Wolfson College at 7.30pm. The city?s current and previous MPs will be joining the discussion. Invitations have been sent to all city, district and county councillors (ask yours if they?re coming!).

This is just the start of a much bigger debate that Smarter Cambridge Transport would like to promote, that draws on the deep well of expertise and creative problem solving to be found in the Cambridge region.