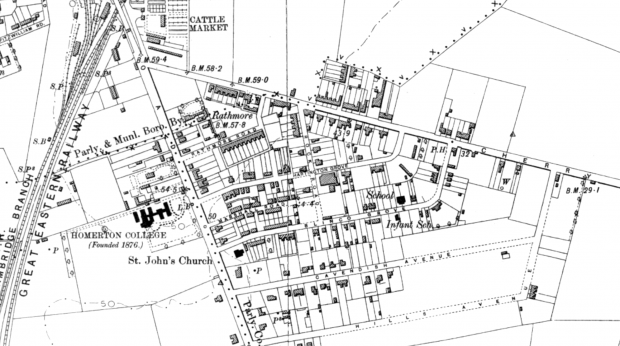 At the start of the 20th century, most of Queen Edith’s was countryside. The north-western corner around Rock Road (above) was the only real built-up area. Over a hundred years later, much of the area is showing the strain of its vintage, with its narrow streets and minimal off-road parking unable to cope with the demands of residents and commuters to the area.

Of all the Cambridge wards, Queen Edith’s has the highest proportion of households with two or more cars, at 29%, and the lowest percentage with no car, at 25%. These roads also have to handle the parking associated with Hills Road Sixth Form College, Homerton College, Cambridge Leisure, and the increasing number of Cherry Hinton Road and Hills Road shops and restaurants.

Our county councillor Amanda Taylor responded to requests last year from residents in the Rock Road area to ‘do something’ about parking. She organised an informal survey of their opinions and followed this up with a public meeting back in February. As a result of all this, Cambridgeshire County Council has now agreed to take the next step and officially ask residents if they want some sort of ‘parking scheme’.

Councillor Taylor writes that the streets included will be Elsworth Place, Rathmore Road, Hartington Grove, Rock Road, Blinco Grove (and Magnolia Close), Marshall Road, and the sections of Hills Road and Cherry Hinton Road which link these streets. Residents will soon be receiving a mailing from Cambridgeshire County Council outlining the possibilities.

Several other neighbourhoods in Cambridge have parking schemes. Here’s a typical example of what’s involved, from the Tenison Road area. One knock-on effect from these schemes, however, is that parking pressure increases on adjoining streets. In this case it would inevitably see increased demand for parking spaces in the likes of Rustat Road, the Lichfield Road area, Cavendish Avenue and Luard Road.

A further complication is that the County Council and City Council are jointly considering a city-wide parking scheme arrangement. This was due to be considered at a committee meeting on 1 November, but the item was withdrawn at the last minute, despite supposedly having been worked on for months. A resident who went along to complain and find out why, described it to me as “an absolute shower of a meeting”, with the reason given for the postponement apparently being the “need to get it right”. The City Deal’s proposals to tackle congestion do include the expansion of on-street parking controls, including greater use of Residents? Parking Zones. However, these are very dependent on the results of the current delayed review.

As has been the case with so many Cambridge transport issues, some of the clearest thinking on parking has come from the Smarter Cambridge Transport pressure group, where I play a small role. You can read the group’s comprehensive thoughts on parking here.

9 Replies to “Parking in Queen Edith’s: the latest developments”