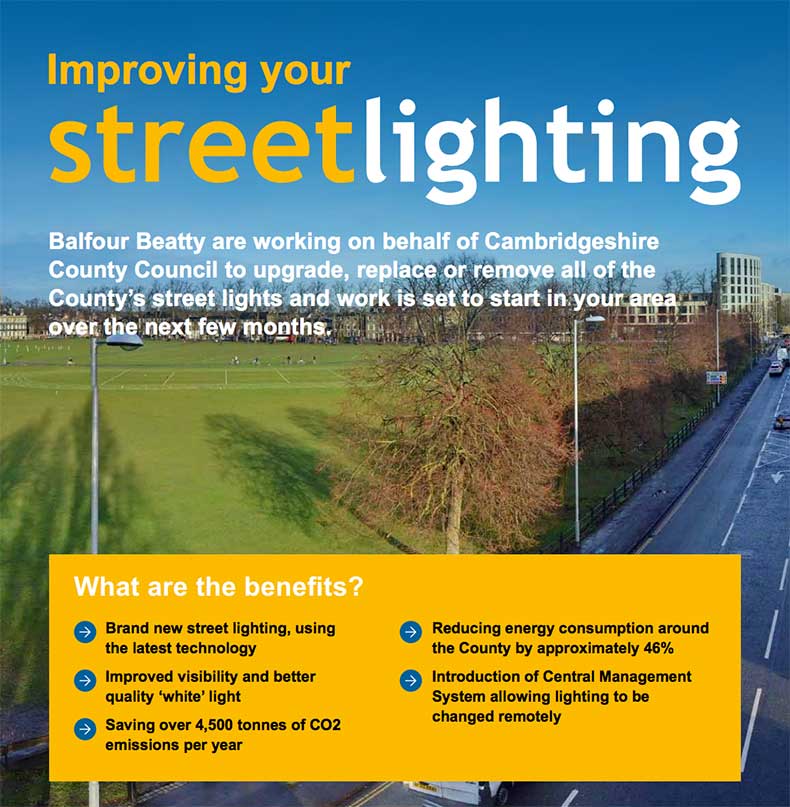 The major replacement project for the county’s street lighting continues its march into Queen Edith’s, and the contractors have issued a series of maps showing proposed changes in several roads. Comments are requested by 24th February, so if you have any, don’t delay.

The roads covered are as follows:
– The whole of Hills Road, and Babraham Road well out of the city;
– Sedley Taylor Road, Luard Road and Luard Close;
– Stansgate Avenue, Red Cross Lane and Greenlands.

Right, let’s take a look at what’s happening. It’s accepted that the old orange streetlights are inefficient, expensive and designed to “run to extinction”, meaning they were allowed to completely burn out before being replaced. It took some effort to get the funding to replace them, and overall, it certainly appears to be a good thing for the area. The replacement and upgrading of the streetlights is planned to take place over a five year programme, and some roads will already have had their lights replaced. The new ones are noticeably different as they emit white light. The columns are taller, and can light up a wider area, but it seems to me that this just appears to have allowed a reduction in the number of lights, rather than giving us more lighting.

Of greater concern is that the new lights can be dimmed, or even switched off, remotely. This is going to give councils the opportunity to do just that, and indeed there have already been trials in the area, with inevitable unwanted impact. However, without the benefit of dimmable lighting, some councils elsewhere have moved straight to a midnight to 4am switchoff, so at least we may have a compromise available. If you’ve been to any of these places, such as Colchester, it’s dangerous – and very scary – at night.

I have linked to the plans for the area below. There’s also a dedicated website which has been set up, called Street Lighting Cambridgeshire, which shows when your road is likely to have its streetlighting changed, if it hasn’t already. The website has a map page (be patient, the map takes ages to populate with information), but I’m not sure it’s of any use. Existing streetlights are shown as red or blue, where red means “to be permanently removed or replaced” (well which is it?), and blue means “lantern change only or permanent removal” (again, which is it?). Without saying which, the map appears to be useless.

Anyway, below are the plans for the roads listed above, where work is most imminent. Small red circles are old streetlamps, and blue ones are the new replacements. If the old lamp has a thick red circle around it, the lamp is not being replaced. So if we look at Greenlands (above), we see that three lamps are being replaced with new ones in roughly the same place, but one is being removed completely.

I do hope that on Hills Road, there’s been some joined-up planning and that the new or moved streetlights fit in with the massive street changes being implemented for the new cycleways.

Once you’ve had a look at the plans, if you have any comments, I suggest they’re sent to our county councillor, Amanda Taylor. I’d like to acknowledge city councillor George Pippas for pointing me in the direction of this article; George says that if it was of interest, “with the help of Councillors Viki Sanders and Tim Moore, we could organise a local meeting where residents questions could be answered either by us or the manufacturers”. Contact George here.