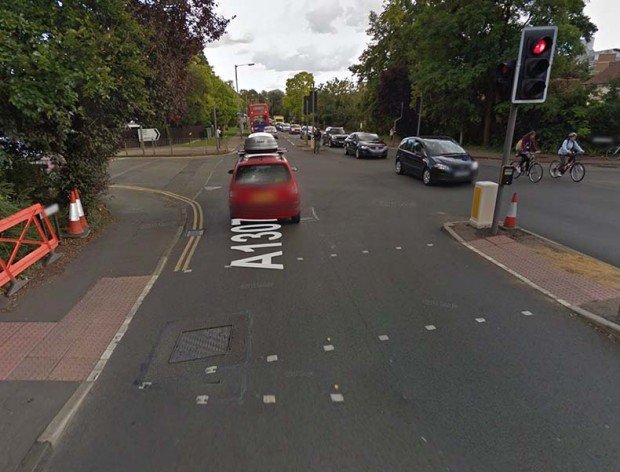 Let’s play “you are the cyclist”. Although for hundreds of cyclists every day, this is not a game. You are cycling down Hills Road from the city in the morning, aiming to get to work (or an appointment) at Addenbrooke’s. You reach the Long Road crossroads above. What will you do?

Obviously, you’ll follow the traffic over the junction, down to the Addenbrooke’s roundabout where you’ll turn right into the hospital, won’t you?

Not if you do it regularly, you won’t. That’s because there is an alternative which cuts off half of the distance and avoids a roundabout which can be, quite frankly, terrifying. Admittedly the alternative involves cycling diagonally across the junction, then proceeding down the wrong side of the road, on a pavement. But it’s something which hundreds of cyclists take the decision to do, every day.

Here are the two routes compared. You can understand why cyclists take the red route. 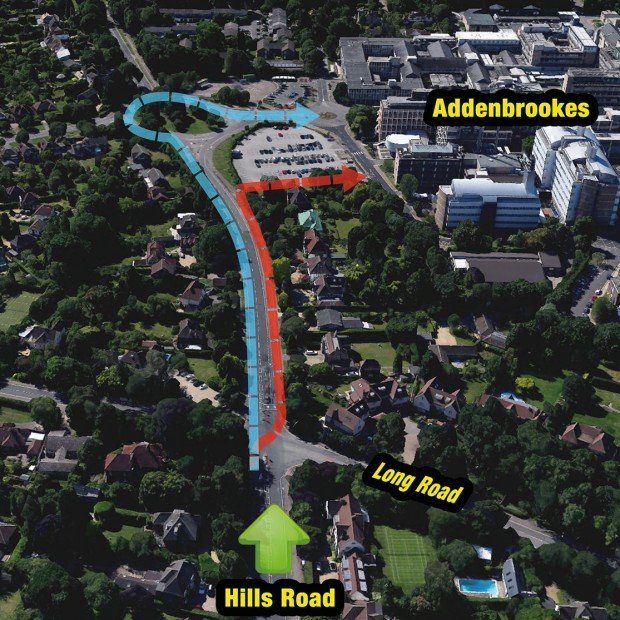 Now, as part of the Greater Cambridge City Deal, this junction is being examined for possible improvements. And the views of residents and users are being sought. We have until 15 February to do so. The reshaping of the paths will have a significant impact for the residents of that section of the road, so it’s important that things are done properly. However, overall the improvements should solve an acknowledged problem, as well as completing the Hills Road cycleway down to Addenbrooke’s.

What should be done? Reading the discussions on the Cyclescape Forum (membership required), there is no obvious answer to keeping everybody the right side of the law, improving safety and maximising traffic flow. The planners have come up with two options. One formalises the cyclists crossing diagonally and taking the red route, on the basis that “they’re going to do it anyway”. It puts a contraflow cycleway on the west side of Hills Road between the junction and the hospital. The other design attempts to keep the southbound cyclists on the correct side of the road by providing a combined pedestrian and cycle crossing just before the roundabout.

You might think that regular cyclists would be in favour of formalising the diagonal crossing, but not all are. Some are strongly in favour of consistency in cycle route provision, and don’t want another ‘one off’ solution in the city which is not replicated anywhere else.

Also under consideration is preventing southbound motor vehicles from turning left into Queen Edith’s way, to avoid difficulties caused by vehicles crossing the cycle lane. You may have a view on this.

So, what’s next? Firstly, there’s an exhibition coming up where you can see the plans and presumably quiz council officers. It’s being held at St John the Evangelist church (Hills Road, on the corner of Blinco Grove) on Wednesday 3rd Feb, from 5.30pm to 8.30pm. I know that lots of local residents are planning to attend and find out more. If you can’t make that meeting, there’s information (including detailed drawings) on the City Deal website here.

Then there’s an official survey where you can put forward some very basic views. You can just skip through the pages about the schemes elsewhere in the city. Finally, you can put your views forward to the City Deal team via any of these routes:
Email: City.Deal@Cambridgeshire.gov.uk
Facebook: www.Facebook.com/gccitydeal
Twitter: @gccitydeal
Post: City Deal Team, SH1311, Shire Hall, Cambridge, CB3 0AP
We have until 15 February to respond.

6 Replies to “Can we fix the Long Road/Hills Road junction for everyone?”