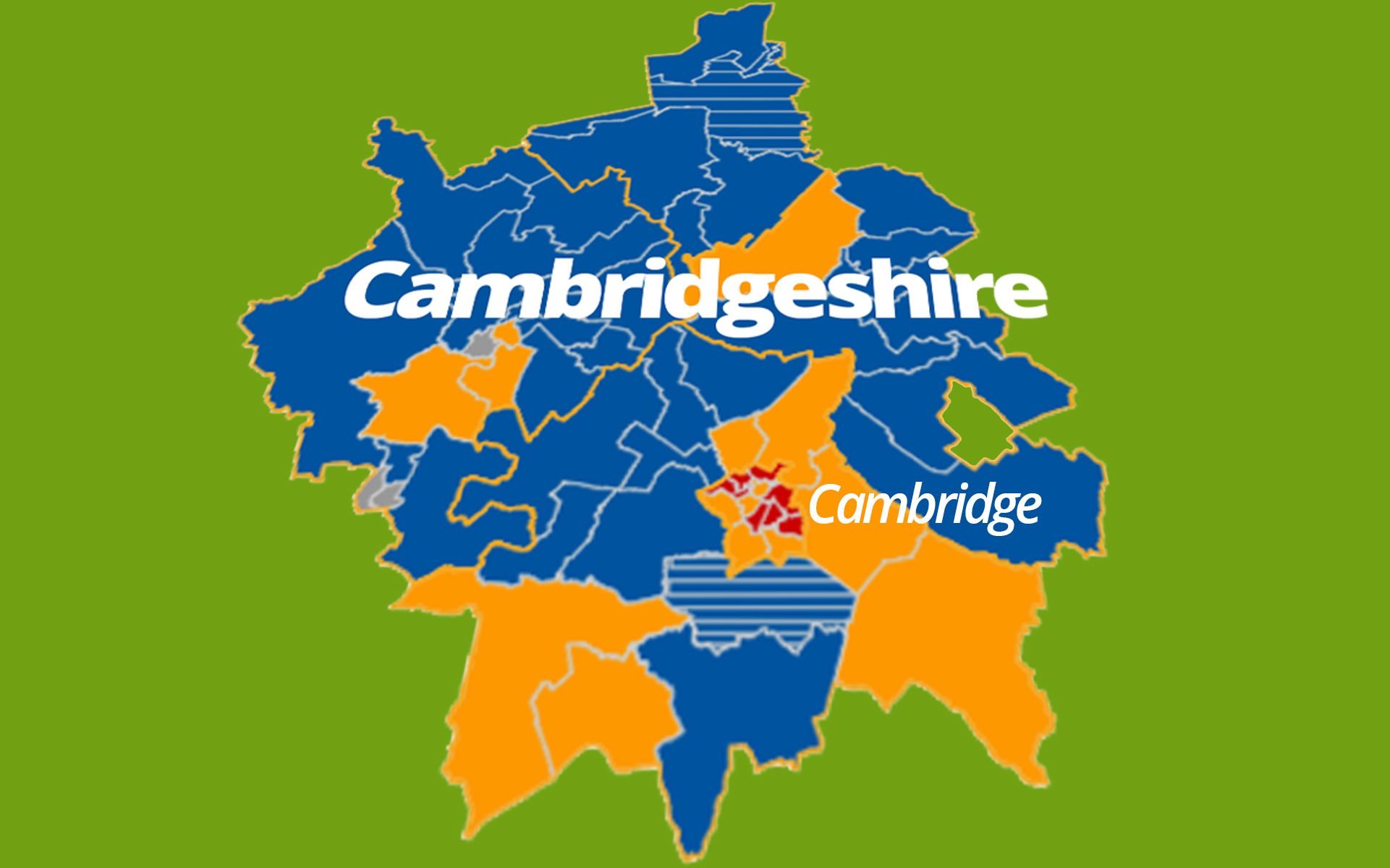 According to my website traffic analyser, over 120 people spent an average of 5 minutes each reading part 1 of this preview, so thanks for your interest, and I hope it was worthwhile. Today’s instalment is somewhat shorter, you’ll be pleased to know, and covers the election for our solitary County Councillor here in Queen Edith’s, as well looking at the county as a whole.

Unlike the huge City Council election bunfight, this is a relatively sedate, standard County Council election. Queen Edith’s has one county councillor, who is elected every four years and was last elected in 2017.

The County Council has many responsibilities, but they include perhaps the one which exercises residents the most: transport. It’s fair to say that our county councillor is not likely to have much direct influence on building tunnels under the city, or other curious projects under discussion. However, they should be knowledgeable about – and representing us strongly on – a number of important things. These include street parking, Low Traffic Neighbourhoods, Cambridge South station and the impact of East-West Rail.

There are four candidates, one each from the political parties that normally stand, and that’s all. No independents, and no minor parties.

Despite the relatively unexciting nature of the election, it has given us the biggest pre-election surprise, the retirement of our current county councillor Amanda Taylor. I assume this was a late decision, as nobody from her party seems to have been groomed as a successor – the Liberal Democrats’ replacement candidate is not someone who appears to have had any previous involvement in Queen Edith’s politics, not even as one of those ‘activists’ who occasionally appear in the party’s literature.

Amanda was a City Councillor for 18 years from 1994 to 2012, when she lost her seat, but returned – as the County Council candidate this time – the following year. She won that election and became our county councillor to succeed Geoff Heathcock (who had been in the post for 20 years) and she has been in the role ever since.

In a short statement on her website, she does not give a reason for retiring, but I’m sure that a factor might be the County Council’s controversial move from Shire Hall in the city centre to a new headquarters at Alconbury, up to an hour’s drive away, and all but inaccessible by public transport.

Three of the four candidates have submitted videos to the Queen Edith’s News online hustings, so I’ve included them here, with acknowledgement.

The Liberal Democrat candidate, and presumably the favourite based on local voters’ usual party inclinations, is Alex Beckett. I have to say I know nothing about Alex, who from his introduction seems to be new to local politics as well as to Queen Edith’s. As most candidates this year are making the most of their local credentials, I’m assuming that because Alex has not mentioned his address that he does not live in the ward. Perhaps we shall hear more in the next two weeks.

The main challenger, again based on local voters’ usual party inclinations, is the Labour Party’s Steve King. I believe Steve also lives outside the ward, but only ‘just over the road’. Again, he has not been a councillor before, but he did stand as a City Council candidate – unsuccessfully – in the Market ward, in 2019.

The most experienced candidate in this election – by far – is the Conservatives’ Donald Douglas, who was the city councillor for Trumpington over 20 years ago (although the area where he lived back then has since been incorporated into Queen Edith’s). Donald has also stood for election in the city on seven other occasions. Curiously however, after living in Queen Edith’s for 35 years, Donald has recently “escaped to the country”, as he puts it, but he definitely knows the area, even if he no longer lives here. He has also helped out with Queen Edith’s Community Forum activities in the past.

The final candidate is Jacqui Whitmore, who is standing for the Green Party in both the City and County Council elections. Jacqui described herself to Queen Edith’s magazine as “a mum of two children who went to Primary and Secondary school in the ward” and is another first-time candidate. She has also been a Queen Edith’s Community Forum volunteer.

With just the normal four parties to choose from, it would take an almost unprecedented swing in voting habits for the Liberal Democrat candidate not to be ushered back in. It did happen in 2012, and Labour’s Steve King is the only candidate I’ve heard anything from so far, but as a rule, the electors of Queen Edith’s vote convincingly for any Lib Dem candidate. It hasn’t seemed to bother us in the past when the party offered us candidates with no political experience or who didn’t live in the ward. So I predict a comfortable win for Alex Beckett, although Steve King will at least be targeting making the gap to first place above him narrower than what might be quite a large one below to Donald Douglas and Jacqui Whitmore.

The new Queen Edith’s county councillor will probably find themselves as a small fish in quite a big pond. Cambridgeshire County Council has 61 councillors, but the tribal divide is stark. The Conservatives have 34 of the councillors, effectively representing all the places furthest from Cambridge, right up as far as Wisbech in the north: 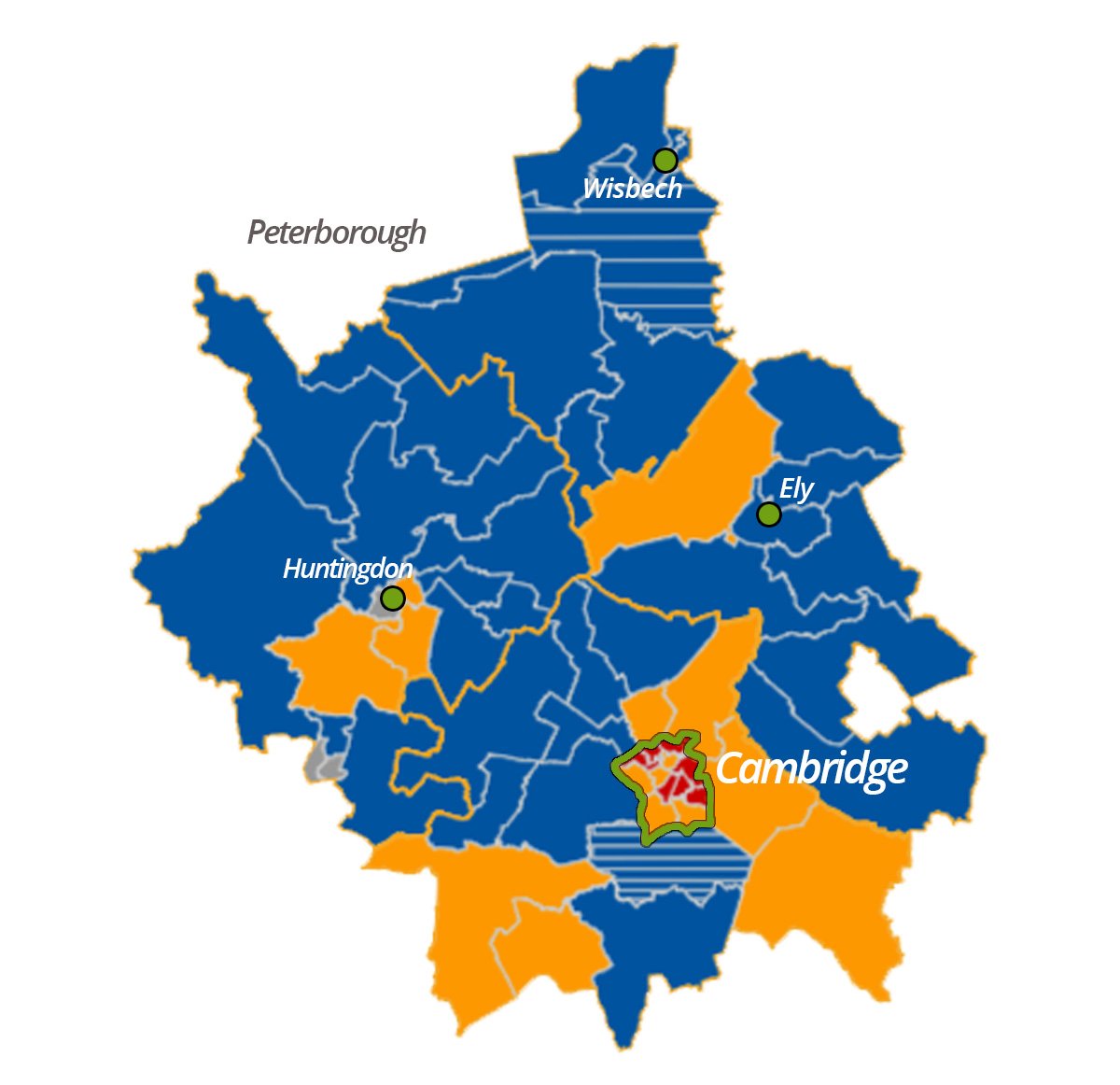 That’s fine, but the problem for the city is that it does not have a single councillor on the ruling group – all of ours are from the Labour Party or Liberal Democrats. This is often reflected in what seems like quite a disdain for the needs of city residents from the County Council. We don’t vote for their ruling party, and they don’t like it.

The Liberal Democrats, who currently have 16 councillors, think they can change this. The action is all going to take place away from Queen Edith’s, but if they can take five seats from the Conservatives, and Labour and independent councillors can retain their 10 seats, the council would go to ‘no overall control’. This would make a big difference in the way it was run.

The Lib Dems performed a much bigger feat in 2018 in the South Cambridgeshire District Council elections, so it’s a possibility. There has been some extensive bad publicity about the behaviour of the Conservative deputy leader of the council, who has resigned and moved out of the area after local newspapers exposed how he was given the tenancy of a farm owned by the council. Making matters worse, the ruling group on the council are refusing to release the report on the affair, which has led to the resignation of the chair of the Audit & Accounts Committee.

The former deputy leader was one of two councillors in Sawston & Shelford, which was already probably the Lib Dems’ top target. The County Council election there will truly show if voters care about so-called ‘sleaze’ any more, or if they will just continue to vote for their tribe regardless.