It’s a month since my previous report on the County Council’s planned switch-off of our streetlights between midnight and 6am. Plenty more has happened in that time, so here’s an update. The council has also produced its consultation survey, which is your chance to tell them what you think. Details are at the end of the article.

Firstly, however, we have learned some more. Although the County Council refused our local councillors’ request to send along a representative to our last public South Area Committee meeting, on the grounds that “officers do not have the time to do so”, they did then send someone along to an equivalent meeting for the East Area of the city. And as fortune would have it, local blogger Richard Taylor was there to record the exchanges. If you have 20 minutes to spare and are interested in the subject, I’d recommend watching it – click here or on the image below. Councillors and members of the public brought up issues unique to the city, such as the number of shift workers we have (especially hospital workers), and the plan for no lighting around the station (although trains arrive well after midnight). They also highlight ignoring the cost of accidents, and the questionable data behind the claim that crime and road accidents will not increase. 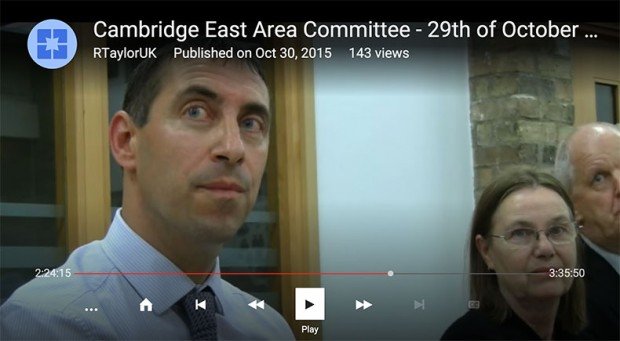 A member of the public suggested at the meeting that – still – only about 10% of residents are aware of the switch-off, and obviously far fewer are aware of the consultation which is under way. She asked what the County Council would do if the response from this was overwhelmingly negative, but as you’d expect, all that the council officer would say was that the collated responses will be presented to the County Council in January. This is of course the normal democratic process; whether county councillors as a group will take any notice of what residents say is another matter.

The most interesting line of questioning, I thought, was an attempt to find out how the council has chosen the few “major routes” where the lights will remain on overnight. The answer was revealing: they are, apparently, “the major traffic routes defined by the hierarchy of routes, such as A-roads”. But these of course are the major traffic routes for motor vehicles, whose drivers will be the least affected by any switch-off. They have their own headlights! Surely we should be keeping the lights on where there are most cyclists and pedestrians? These routes may not be the same, especially in the case of cycleways, the cycle bridge at the station, etc.

I’m also intrigued as to how the County Council came up with its proposal for the times of midnight to 6am for the switch-off. It’s not the same as other authorities which have experimented with the idea. Where did these times come from? Were they just selected on a whim? I have requested from the county council the data on hourly traffic volume changes which have led to these hours being chosen. If this data cannot be made available, I would like to know the answers to the following questions:
1. I assume the hours of the proposed switch-off of streetlights across Cambridgeshire have been chosen because the traffic volume falls below a certain threshold. What is this threshold?
2. Does this traffic volume relate to all traffic, including pedestrian and cycle traffic, or just motor vehicles?
3. Have the hours been chosen consistently across Cambridgeshire because the traffic volume falls below a certain threshold consistently across Cambridgeshire, or are they based on the average traffic across the county falling below a certain threshold and this being applied uniformly across the county?

I’ll report back if I get an answer. Maybe there is a compromise: it’s quite possible that the lights could be dimmed further, rather than switched off, and that in the city at least, the switch-off hours could be changed to 1am to 5am, which I suspect would affect significantly fewer people. I would be happy to see the County Council do this.

Meanwhile, as promised, here are details of the County Council’s public consultation. It takes the form of an online survey. Despite being responsible for the lights (and the proposed switch-off), you will notice that there’s no obvious highlighting of the consultation on the County Council’s website. Fortunately the City Council has come to our aid on its website, and here is the link to the survey. Alternatively, click on the image below. The survey only took me about five minutes. However, it begins by asking if you’ve actually read the council’s proposals, and if you want to do this first, they’re here. Do take a look ? it’ll take an extra couple of minutes. 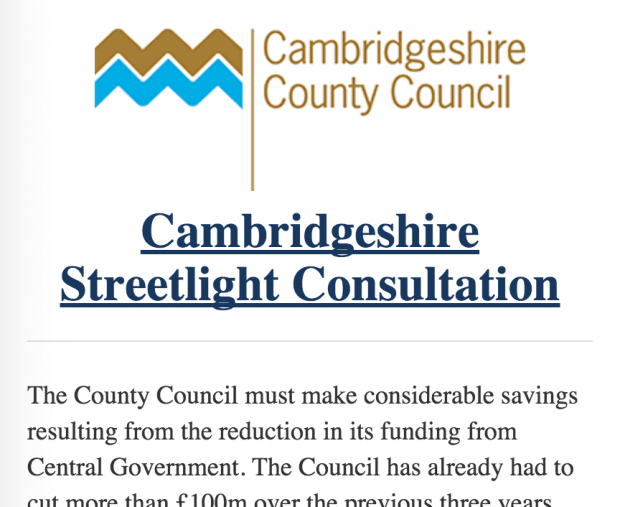 If you want to know what you’re letting yourself in for, here’s what a completed survey looks like.

If you know somebody who would like a copy in paper format, they can get one sent to them by calling 0345 045 5200 and asking for a copy of the streetlighting consultation survey.

Please note that there’s only four weeks to reply (closing date is 11th December), so do let your feelings be known now, if you can. Whether you’re pro- or anti-, the County Council needs to know that we care.