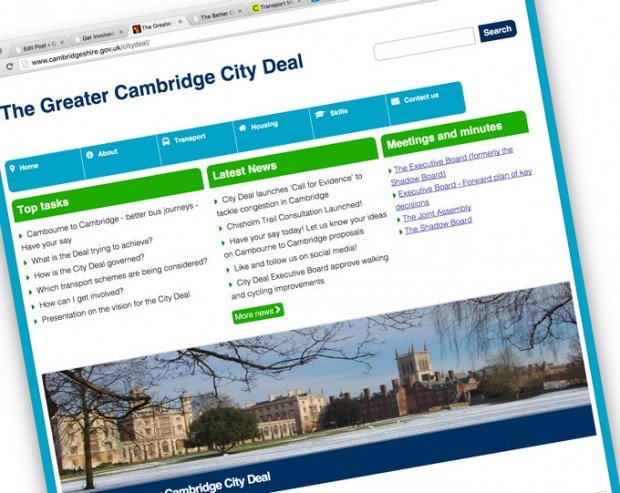 There are several local issues which have become hot topics of late, so there may be three or four of these blog posts from me over the next week or so. Today I’d like to talk about an issue which goes much wider than Queen Edith’s: the “City Deal”, and how you might like to get involved. There’s a staggering amount of money being offered by the government to help Cambridge grow efficiently, and I suspect that some of the greatest expertise in how to use this money lies amongst the residents of this city, rather than the people who’ve already quickly been appointed as the ones who get to decide. We need to get involved, or there’s every chance that we’ll end up with some unambitious compromise for which succeeding generations won’t thank us.

So, what is the City Deal? It’s a scheme to fund transport, housing and training in Cambridge and South Cambridgeshire over the coming decades. Have a read of the original government announcement from 18 months ago, here.

The scheme is being put together by the local councils and the University of Cambridge. There’s much more background at the city deal’s own website here, and I’d particularly recommend a browse through this presentation.

Already there are proposals coming out to do with transport, and almost inevitably there are groups opposing the plans. I know that certain parts of the city have transport issues which need solving quickly, but even so, surely the scheme warrants some long-term, strategic thinking from the outset? As Cambridge Past, Present and Future have said: “There is a once-in-a-lifetime opportunity to do something really original and innovative. Unfortunately such high aspirations do not seem to be on the City Deal?s agenda. The funding is to be targeted mainly at engineering projects designed to improve the traffic flow at bottlenecks, when evidence shows all this does is simply to move the congestion further down the road.”

Yes, at the moment, the City Deal board have given the impression that they want to start solving the region’s problems by painting bus lanes. This may not be entirely fair, but it’s led to residents and other interested parties taking matters into their own hands. We all know Cambridge can do so much better than this.

Some groups are ensuring that better plans are formulated. The independent A Better City Deal for Greater Cambridge group, which has some impressive expertise in its ranks, has come up with its own ten-point plan which could well be far more innovative than any official ideas. Other groups are hoping to ensure that we don’t rush into something we’ll regret: an organisation called Save The West Fields has quickly mobilised to object to another early idea, to build a busway across the farmland between the back of Grange Road and the M11.

This is an exciting time in the development of our city, and if you’d like to take part, there are opportunities to do so. To be fair to the City Deal board, it is now turning to the wider population, and has just launched a ?Call for Evidence?: “an opportunity for anyone or organisations to put forward their thoughts on how they believe the congestion issues in Cambridge can be solved”. This takes the form of a series of events starting next Wednesday, 11 November, at the Guildhall. Full details are here.

If you want to hear some of the alternative suggestions being formulated, it’s going to be well worth attending a meeting supported by the Federation of Cambridge Residents’ Associations at Cambridge Rugby Club next Thursday, 12 November. Here’s the flyer ? I shall be going, and will report back. If you’d like to join me and need a lift, drop me an email.