Today’s article is the fourth in this blog’s five-part series this week on transport and our streets. It’s a contribution from our Queen Edith’s city councillor Tim Moore, who has consistently been involved in transport issues since he was elected in 2014. While I don’t necessarily agree with Tim on every point, I’m impressed that one of our councillors is thinking things through so thoroughly, and I’m delighted to give his ideas wider coverage. – Chris

Congestion is an inevitable consequence of any bottleneck in a network: in a road network this includes junctions, lights, road works, parked vehicles etc. It is only important because:

Congestion is a byproduct of increasing traffic as it approaches the road network?s maximum carrying capacity measured in journeys per hour, network throughput.

Network congestion is?the result of rising journey times as more vehicles enter the road network. The relationship between the number of additional vehicles and the increase in travel time is complex and network specific. We know that when there are few vehicles using the network, a few more make almost no difference to travel time. The nearer the network is to its maximum carrying capacity (A), the greater the increase in journey time for each additional car. A critical point is reached (B) after which gridlock occurs rapidly.

Network throughput (journeys per hour) is the critical factor that needs to be maximised. The aim is the largest number of journeys possible per hour while keeping travel time and congestion reasonable.

The network capacity is a limited and valuable commodity. How can we optimise its use? 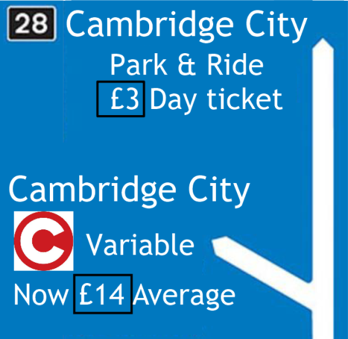 Variable road use charging depending on current/predicted congestion levels, charges rising rapidly to deter all but those needing to pay a high deterrent price, whilst allowing individuals freedom to choose to pay, provides the optimal solution.

Will other forms of ?congestion charge? work? Only if they ensure that:

Fixed charges alone cannot do this ? the charges need to become so great (when required in real time) that a sufficient proportion of potential road users opt for alternatives once close to the City. Buses must be available, reasonably priced, with integrated public transport network when needed ? to be a reliable alternative. That way the buses can be guaranteed fast reliable journeys.

The alternative is to provide a costly parallel network (unavailable to private vehicles) of bus only lanes and roads, leaving the public roads gridlocked for periods in the day. This is wasteful of public funds, environmentally destructive, and highly costly to the business of the City.

Any action that reduces the network capacity will reduce network throughput and so is counterproductive: this includes most bus lanes, closed roads (deemed ?rat runs?), segmenting the City, and penalty charge zones (excluding most vehicles) for fixed periods of the day.

The City is entering a paradigm shift away from free use for all vehicles at peak times: practical alternatives are required, and a fair vehicle charging structure that relates to use of scarce network resource (network bottlenecks in particular). For this to work a functional (much improved) public transport network needs to be in operation as road charging is implemented. The aim is that all travellers can get to their destination within a reasonable and repeatable time, when they need to, using the best mix of transport modes and at a reasonable cost. Those who choose can pay a larger price for the use of limited road capacity may do, but the charge must be sufficient to deter as travel time starts to rise (and throughput falls).

An increasing number of travellers to Cambridge are coming from surrounding areas and further afield. Many have no real alternative but to use their car, at least to reach Park and Ride outside the City (see Zone A below). Within the City it is not currently possible to get to a variety of locations with public transport.

Alternatives to the car should be encouraged and provided: 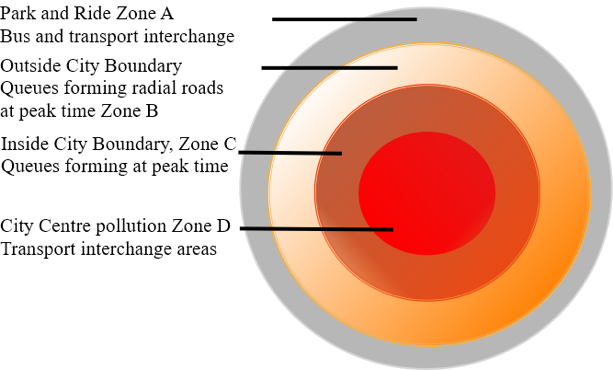 An economic perspective might be to invest a sum such that the cost and benefit are approximately equal. The starting point is an economic evaluation of the current and projected cost to business and health. Where is this?

The City is wealthy and growing and offers viable business opportunities for investment in its public transport, alongside public funding. Where is the overall financial plan, including private and institutional investment?

There is a partial plan driven by City Deal monies, and perhaps two private bus companies providing limited services to some parts of the City. Disjointed incremental planning in silos is a costly and a risky means of delivering the required paradigm shift. Penalising road users when no alternative is available is foolhardy and economically damaging.

As economies of scale are achieved the costs of running fuller buses are lower and so the cost to each user should fall. Bus fares should therefore become cheaper in the long run.

For many routes smaller buses running predominantly at peak times are needed (for example school and employee pick up in villages without a bus service, with delivery on a radial route into the City). Within City frequent buses from the bus interchanges (including Park and Ride) and Railway stations will be required. Smaller less polluting buses may prove viable. High capacity buses are best suited to longer distance radial routes.

Public funding of sensors is a first step, ideal for City Deal funds. Number plate recognition (NPR) works with a London style congestion charge perimeter and where the number plate is visible (e.g. car entering a bus lane). It may be less useful for road charging unless each bottleneck has NPRs. Roadside sensors and responsive vehicle tags may be less expensive to install. A live app reporting back to the charging mechanism in real time may also be possible. Sensors are required at bottlenecks (points of congestion) on the roads leading into Cambridge, both outside and inside the City perimeter (including the City centre) and perhaps at other points in the Greater Cambridge area where travel time rises during peak times.

In Summary ? The Pickle

So many of the required elements for an optimal solution are missing, some planned changes are simplistic destructive and retrogressive. There is no master plan, poor vision, and a destructive set of City Deal projects. Where is the change of paradigm plan? We don?t even know the business and health costs to the greater Cambridge of current and planned road rationing models. In a City with such skills, abilities and wealth at hand, a practical futuristic vision should be deliverable. Where is the vision in the current plans, the joint planning, investment, and risk sharing? What is the organisation charged with ensuring the integrated public transport system operates within the funding available?

Thoughts on a Charging Algorithm

Purpose: to maximise the economic benefit of the whole road network (around Cambridge) by

Tim Moore can be contacted by email at atimmoore@gmail.com.