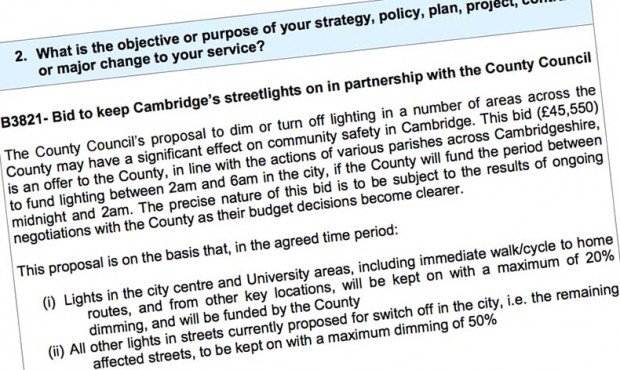 As we know, there’s been a significant outcry about the switch-off proposals in towns and villages across the county, but nowhere more so than in the city, which of course has a substantial ‘night time economy’. The hours during which the streetlights are currently scheduled to be turned off (midnight to 6am) seem to have been chosen arbitrarily, with no concession to local requirements such as the arrival and departure of the first and last trains at the station. The roads where the lights are proposed to be switched off have also been selected without any sensible data; indeed, priority for lighting seems to have been given to roads with significant motor vehicle traffic, when it’s cyclists and pedestrians who need streetlighting the most.

In its own proposal, the city council says that it will offer ?45,500 to fund streetlighting between 2am and 6am in the city, if the county council will fund the period between midnight and 2am. In other words, it’s asking the county council to keep the lights on and it will pay two-thirds of the money which the switch-off would have saved.

The county council itself admits that the switch-off may unfairly impact residents on the basis of age, (dis)ability and gender, and may negatively affect what it calls ‘community cohesion’. Meanwhile, the current city council seems to put supporting the disadvantaged amongst its highest objectives, so political principles may have been a big motivator in encouraging them to offer to cover the cost of keeping the lights on.

Those of us in the city who applaud what the city council is proposing can show our support at the ballot box in May: it is the majority Labour party on the city council which has come up with the proposal to cover the cost. It should be noted however that keeping the streetlights on has also been strongly supported by our city and county councillors in Queen Edith’s, all Liberal Democrats.

The move is a risky one for the city council. Buoyed by the way this issue has panned out, who knows what other services the county council might target for removal if it feels that local communities might then stump up the cash to ensure their continuation?

The county council met two days after the report above to make a decision on the streetlighting issue. They heard that 1,865 responses were received to the public consultation exercise, with an overwhelming 78% stating that they disagreed with the introduction of part night lighting, a level of objection described as ‘significant’. A compromise was therefore proposed that the period for which the county council would not pay for streetlights should start at 2am instead of midnight. This was agreed unanimously. Before this, however, our own Queen Edith’s representative on the county council, Amanda Taylor, had proposed an amendment that in light of public concerns, the county council should, after all, pay for the lights to remain on all night. The vote on this was 6 for and 6 against, but the proposal was defeated by the casting vote of Roger Hickford, a councillor from Linton.

Fortunately it does appear that the county council is happy for local councils to pay the extra for the lights to stay on after 2am. This was not a given; it had to be fought for in Essex. And as reported, the city council here in Cambridge does plan to find the money to keep the lights on.