I’ve been stacking up quite a few items to do with transport issues over the past few weeks, and I thought I’d post them this week, one per day. So if you’re not interested in all the shenanigans regarding transport in the city, please forgive me, and just ignore anything from me between now and Friday!

You’ll have heard all about the ‘City Deal’, of course. This project has been brewing up plans for over a year now, and many residents have not liked what we’ve seen.

With ?100 million to spend on transport ‘improvements’ in and around the city, the City Deal was grabbed eagerly from day one by senior members of the County Council’s staff responsible for transport strategy (note: not councillors). To date, there seems to have been little direction or control exercised over them, and I can’t disagree with those who’ve said that the City Deal management has been disappointing, to say the least.

Some members of the controlling board resigned, and the remaining councillors have let the officers propose one badly-received scheme after another, seemingly having lost much of their normal political instinct.

It seems to me that having driven through the building of the “misGuided” Busway a few years ago in the face of massive local dissent, the County Council officers thought that they could get away with whatever they wanted this time too. And maybe they can. But I think they have been taken aback at the level of public opposition.

There have been three main schemes chosen as part of the City Deal to date (as well as the well-liked Chisholm Trail plan, which they inherited). One is a proposal to widen Milton Road and Histon Road to take a bus lane and cycle lanes, which has drawn massive opposition from local residents there. Trust me, if you look at the plans, you’ll understand why. Another scheme is to build a bus road to Cambourne, which (like the Guided Bus) doesn’t address what happens when the buses get into the city. The public were asked which of a selection of routes they preferred, and the City Deal promptly chose the most unpopular one.

Just today, some folks have amusingly attempted to show how buying a Chinook helicopter to ferry people in from Cambourne would be cheaper than the new busway.

But the proposal which literally brought people out onto the streets in protest is one which would see the main roads into the city closed at certain points during peak hours. Mill Road TV did a 15-minute report on last week’s public demonstration:

Actually, restricting the road network in some way could have a beneficial impact on congestion; we’re all used to the rising bollards we’ve had in the city centre for several years. But the City Deal has got everything wrong in its plans: poor communication about what they want, a strange choice of closure points, and a seeming inability to visualise how this will work in conjunction with other plans.

I’m now seeing the worst possible thing happening: the first signs of all this becoming a party political issue. Then we’d have the council officers coming up with unwanted ideas, and councillors voting for and against them based on random party-policy grounds, rather than what the public wants or the city needs.

For example, one of the things which the City Deal has dismissed as an option is ‘congestion charging’.Those people against the idea, arguing that charging people to use the roads is regressive, include some senior Labour party politicians. They say: why should someone who’s hard up be priced out of driving their kids across town, while someone with cash to spare can still swan into the city in their Range Rover to go shopping at John Lewis? However, a few loud voices within the opposition Liberal Democrat party think that road charging is the sensible solution. It doesn’t sound like all of their colleagues agree, but nevertheless, there appears to be a push to make it a party political issue. Inevitably, both sides will be roping in all their mates to try to defeat the opposition, rather than give us what’s best.

Frankly, what we want, as citizens, are fair and effective solutions, nothing to do with party politics. I wish they’d all leave their tribalism at their party conferences. But you may say I’m a dreamer (if not the only one).

We’ve had it easy so far

Here in Queen Edith’s, we’ve had it easy so far. We’re not off the hook though. Next spring, we’re due to hear what the City Deal is proposing for the A1307 (the southern approach to the city, from the Addenbrooke’s roundabout right out to Linton and beyond). With ?39 million allocated to this, we should be quite excited at the potential improvements. But given the City Deal’s record so far, I’m slightly scared at what they might come up with.

Tomorrow and later in the week I’ll be covering transport further. I have an interesting article by one of our city councillors, Tim Moore, and the new Cambridge Independent newspaper has given me an opinion piece on Wednesday, which I’ll talk about here. On Friday, the Smarter Cambridge Transport group (of which I’m a member) has organised a meeting at Wolfson College called Rebooting The City Deal. Originally conceived just as a chance to put forward the group’s alternative proposals for improving transport in the region, it’s become an opportunity to rally councillors and other decision-makers from around the region to start putting their foot down and (at last) standing up to the City Deal autocracy. I hope that as many of them as possible attend. If you happen to be speaking to anyone with any influence in the city, from councillors to residents association representatives to business owners, please encourage them to come along. And if you are such a person, we look forward to seeing you. 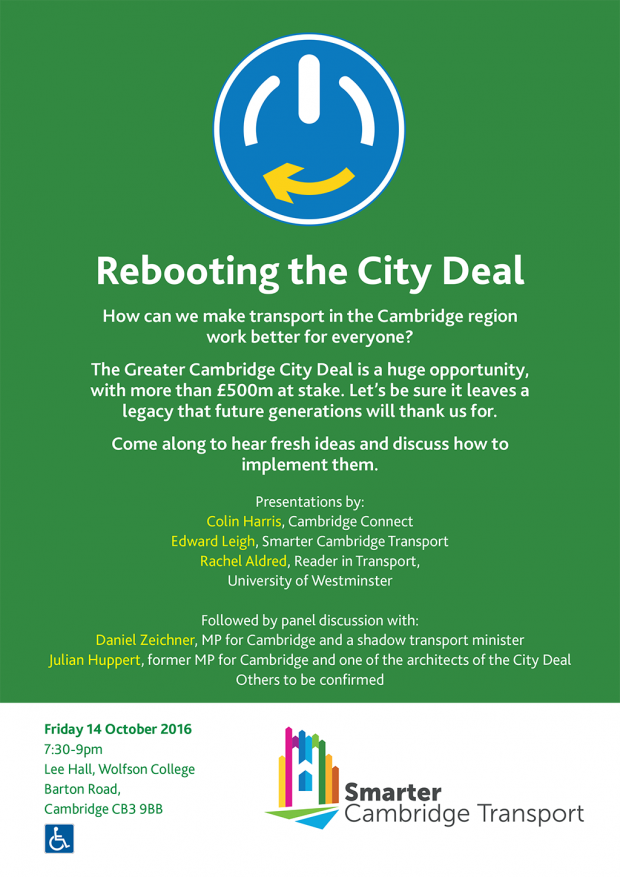