This week I was delighted to be part of a small group of residents from the Hills Road area invited to a meeting with the County Council’s Cycling Projects Team to discuss the progress of the cycleway projects along the road. It was an informative meeting, and I’d like to commend the council officers for bringing us all together.

Unfortunately (and you knew there was going to be a ‘but’, didn’t you?) it highlighted one big potential issue looming for residents. The Cycling Projects team is applying for a Traffic Regulation Order on Hills Road, from the Sixth Form College down to Addenbrooke?s. This would bring in a ban on loading and unloading down that whole stretch of road on weekdays between 7-10am and 4-7pm. They explain: “Currently the double yellow lines mean no waiting, but dropping off, picking up, loading and unloading is permitted. We chose not to put back the solid white line of the previous mandatory cycle lane because double yellow lines prevent parking on the verge whilst a solid white line doesn’t.”

Now, you may or may not think this is a good idea. But the problem is, in terms of consultation with residents, it’s being introduced in the most ham-fisted way possible. Some residents were asked for their opinions and then ignored; the rest were just left to find out from some tiny notices placed on lamp-posts: 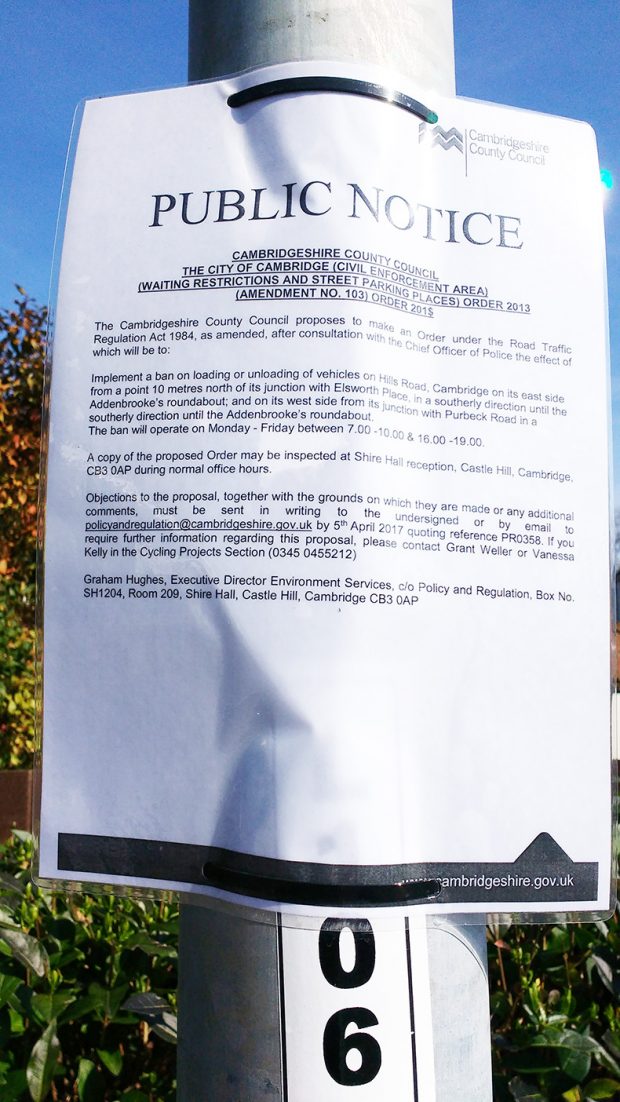 You’ll notice that if you want to find out more, you’re supposed to go to Shire Hall and ask. There’s no indication that there’s an explanation of the proposed scheme online, or in the library. You’ll also notice that you’ve got until next Wednesday (5th April) to object.

And would objections have any impact? That’s what several residents are asking themselves. The idea started on the right foot. News was sent by the council to the Hills Road Residents Association a few months ago, in time for their December meeting. Conversation with the residents like this is welcome, of course. As a result, the group noted that they were broadly in agreement with the proposal, but that members would write to the council with questions and any objections. One wrote:

“I have consulted with some neighbours and find opinions split.

“In our house, we feel that this may just add to unenforced rules which make life difficult for everyone without really improving safety. We note that the white posts prevent vehicles from pulling off the road so the sedum is protected but cyclists are not, which seems at odds with the stated aims for the cycleway.

“Requiring delivery companies to operate outside peak times will substantially affect their delivery routes and businesses. Concentrating deliveries during non-peak hours may even out congestion (by reducing vehicles at peak times but adding them at other times) but I am not sure if that is good or bad. Surely requiring delivery vehicles to use driveways where they are available would be a more logical step. It sounds as if there would be many exceptions, which would muddy the picture further.

“We are part of a Cambridge fish club and receive fresh fish from Cornwall first thing in the morning; I would be very sad to lose that service.

“You say a similar scheme in Gilbert Road works ‘reasonably well’; how has the current proposal been adapted to improve on the Gilbert Road experience?

“You also mention that enforcement is being increased along this stretch of Hills Road, but it is not clear which rules are not currently being enforced.”

The residents who discussed the issue assumed the council would come back to them, addressing any problems raised, and that as a next step, the information could then be disseminated more widely to neighbours. Sadly, I am not aware that any received a response. The next development was the notices on the lamp-posts.

Now those residents who object to the plan, or want to see it discussed further, have just a few days to email the council with their views, and no suggestion that what they say will have any effect. Our councillors don’t seem to have been very engaged; one tweeted about it earlier this month, without saying there was a consultation running. That’s all I can find.

Again, it seems that even when council officers start off with good intentions to get residents involved, things end up in a mess. What can we do?

As stated on the lamp-post signs, if you want to object to the proposed Traffic Regulation Order, you should email policyandregulation@cambridgeshire.gov.uk quoting ‘PR0358’. To talk to a council officer, call Grant Weller or Vanessa Kelly on 0345 045 5212.

8 Replies to “An unloading ban on Hills Road? Who knew?”