After the various local councils’ “Local Plan” went to the government inspector nearly two years ago, you might have thought the “Save The Green Belt” campaign had done what it could. But the government inspection didn’t begin until the autumn that year, and after 5 months came back with some ‘concerns’. Over the summer, the councils attempted to address these, and have come up with some modifications which they expect to put to the planning inspectors in a few weeks’ time. But they’re asking for public opinion, and we have until 25 January to have our say. One of the major modifications involves further erosion of the Green Belt just outside the Queen Edith’s boundary, so you might like to contribute.

Here we go then. The image below shows an impression of the Cambridge Biomedical Campus under construction next to the existing Addenbrookes site (click to enlarge and to see key): 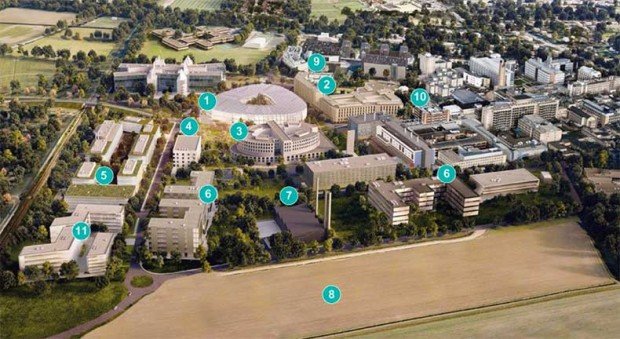 You’ll see the area “8” is already designated “Phase 2 development land”. This takes the Biomedical Campus down to the boundary of the city (and indeed Queen Edith’s). What the new proposal is suggesting is that the Biomedical Campus is also given a similar sized plot of land the other side of the path, including the bottom right hand corner of the image above. This area is outside the city, in South Cambridgeshire, and can be seen in the map below: 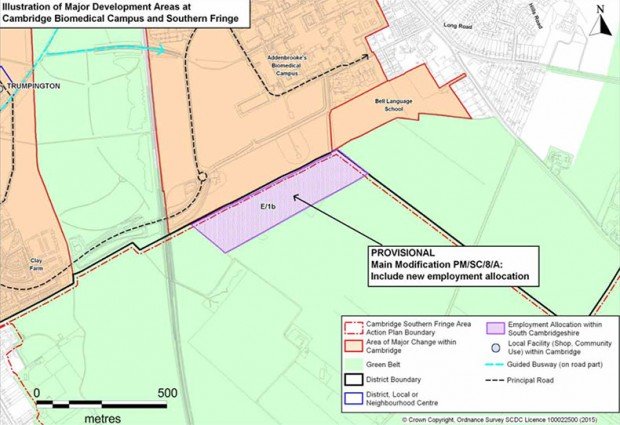 Of significant interest is that the new area marked for development borders on the Nine Wells nature reserve, which you can read about here. The city council says: “Nine Wells is a historically important site containing several chalk springs, which form the source of the Hobson Conduit. Previously a SSSI (Site of Special Scientific Interest), Nine Wells once contained some rare freshwater invertebrates, however following the drought of 1976 these were lost. Today the chalk watercourses are being managed with the aim of re-creating the conditions favourable for a possible re-introduction of these rare species.”

Local wildlife enthusiast John Meed has recently completed his annual ecological surveys of the fields around the nature reserve. He says that “the area remains extremely valuable for farmland birds of high conservation concern, with exceptional numbers of grey partridge in the autumn, as well as good numbers of skylark, linnet, yellowhammer, corn bunting and yellow wagtail.” You can read his report The value of the green belt south of Addenbrookes, Cambridge to populations of farmland birds here and his report The grey partridges of Nine Wells here.

It’s clear then that the proposed extension of the Biomedical Campus is not good news for wildlife. But according to Aidan Van de Weyer of the South Cambridgeshire Liberal Democrats, “No one has demonstrated that there is any demand for the development of this land, let alone made a case that benefits of development would outweigh the damage that it would cause.” So if you’re wondering if this really is a commercial extension too far, you might have good reason.

Back to the beginning, and we have the next week or so to comment on this plan. Details on how to have your say are below. If you’ve decided you want to oppose the development, there’s also a petition which has been organised, which you can sign very quickly here. The South Cambridgeshire Liberal Democrats have even made a slideshow video about it:

There is an online consultation form available; it’s tricky to navigate, but my instructions below should see you through. Alternatively, you can respond via email ? the details on how to do so are here. You are commenting on the Cambridge and South Cambridgeshire Modifications Consultation Report PM/SC/8/A.

3. Now you need to find the relevant place to comment (above). This can be extremely frustrating, but what you’re looking for is section PM/SC/8/A, and if I’ve got this right, you can find it by clicking here. Click on the pencil.
4. Select “Support” if you want them to extend the Biotech Campus, or “Object” if you do not want them to do so.
5. You can now add your comments, and what you would like to happen. The tick boxes below are typical bureaucratic waffle, and I’m not sure what’s really necessary, but I selected ‘yes’, ‘no’ and ‘yes’; ‘justified’; ‘written representation’; ‘yes’, ‘yes’, ‘yes’. When done, click ‘Submit”.