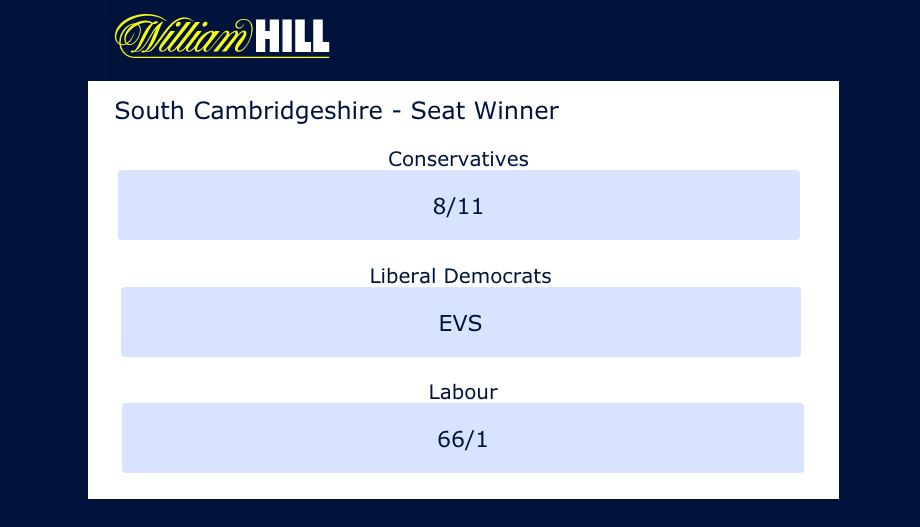 Inspired by Phil Rodgers’ excellent article The Prospects for Cambridge in the 2019 General Election, I thought I’d put together a shamelessly derivative equivalent for the South Cambridgeshire constituency where Queen Edith’s finds itself. 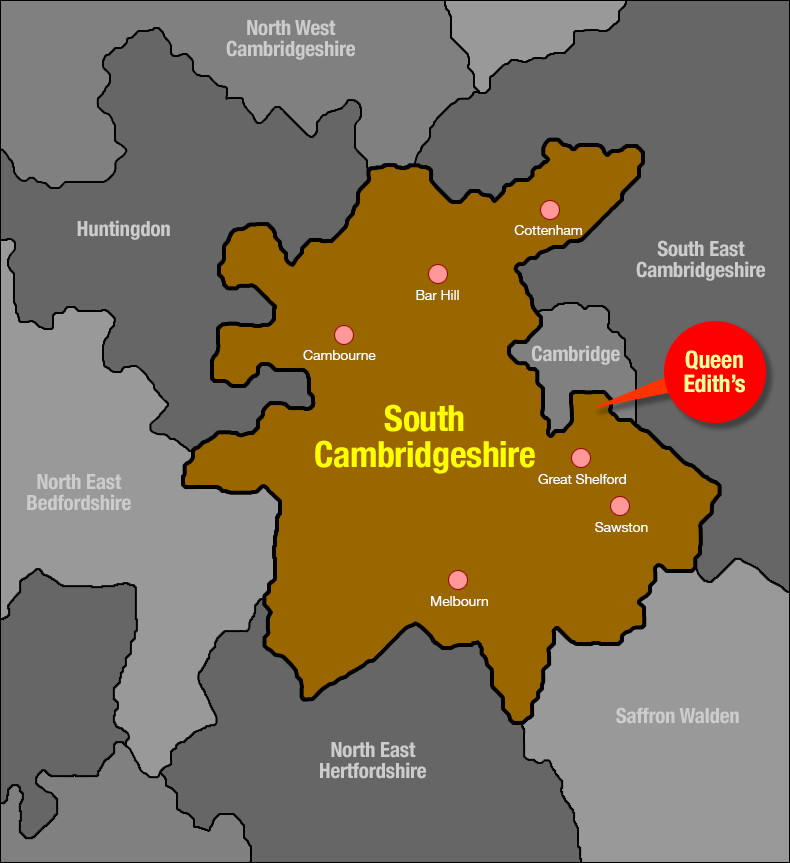 First of all, here’s the result from the last General Election, in 2017:

In the 2017 election, as in every previous general election since the creation of the constituency in 1997, and also the entire history of its predecessor, the Conservative party candidate’s votes might as well have been “weighed rather than counted”, as they say. South Cambridgeshire is one of those places where the competition is only ever for the runner-up spot, and our vote is never going to change anything.

For a constituency which has delivered the same predictable results election after election, we’ve just been through an unrecognisable period. In the space of under two years, we’ve had all of the following:

This may be why (at the time of writing) both Ladbrokes and William Hill have suddenly written off the Conservatives’ historical dominance and have the race almost too close to call. You can see the latest odds here.

Suddenly, it’s all quite exciting. Our vote could actually make a difference!

There are other factors to add to the mix. There will not be a Green party candidate this election, due to a campaign which Heidi Allen has been leading called Unite To Remain. This project was set up to avoid a split in the vote between parties and candidates committed to remaining the European Union, and has brokered agreements for candidates from the Liberal Democrats, Greens and Plaid Cymru to stand down where one of the other parties stands a significantly better chance of being elected. This is happening in over 10% of constituencies in England and Wales, including South Cambridgeshire. Its organisers hope that potential Green voters here will support the Liberal Democrats.

So who’s standing to be our next MP?

There will be only three candidates on the ballot paper, from the Conservatives, Labour and the Liberal Democrats. After having had two women candidates in 2015 and 2017, you’ll notice the diversity of choice this time is rather disappointing. One of the three candidates has stood for election here before, the others are both first-time parliamentary candidates.

Mr Browne is best known for working for Boris Johnson in his first term as Mayor of London, in charge of economic and business policy, and writing his 2012 election manifesto. A former national journalist and CEO of the British Bankers’ Association, he currently helps run and invests in a range of start-up technology firms. Here he is on Twitter and here’s a recent video:

Great to welcome Matt Hancock, the Health Secretary, to Addenbrooke’s, as he made a major investment announcement. The Conservatives are the party of the NHS. pic.twitter.com/qPJ1xPeot1

Mr Greef works part-time as a teacher in the constituency, whilst also running his own business. This will be his third time standing as the Labour parliamentary candidate, and local residents will also know him as having stood for City Council in Queen Edith’s in recent elections. You can find out more on Twitter here, and here’s one of his videos:

Mr Sollom works for a small business strategy consultancy where in particular he works with companies in the energy sector. He is a District Councillor for Harston & Comberton ward on South Cambridgeshire District Council and Assembly Member on the Greater Cambridge Partnership (formerly City Deal). Updates are on Twitter and here’s an introductory video:

Introducing myself, Ian Sollom, standing to be the next Liberal Democrat MP for South Cambridgeshire – setting out my priorities if I'm elected to represent the residents of South Cambs.#Stop Brexit build a #BrighterFuture

So who’s going to win?

If I knew that, the next post here would be from my island in the Caribbean. Dan Greef has done an impressive job building up Labour’s vote from an almost negligible total back in 2010 to a strong second in 2017, but the momentum is clearly with Ian Sollom of the Liberal Democrats as a serious challenger to the Conservatives’ new candidate Anthony Browne.

As for the contribution from Queen Edith’s, Electoral Calculus predicts the votes for the Conservatives here will be the weakest in the constituency. But of course nobody truly knows what happens on a ward level: the only way anyone can tell is to watch the count on election night, when the ballot boxes from each ward are tipped out onto the tables. I did just that in 2015 and 2017, and I estimate that on both occasions there were more votes in the Queen Edith’s boxes for Heidi Allen than for anyone else – in a ward where the party’s vote in council elections is often tiny. So it seems voters are happy to change party allegiance depending on the candidate and the type of election, and the parties know this. Expect to see a lot of local campaigning, despite the cold, dark nights.

Come and hear the candidates!

The Queen Edith’s Community Forum is joining with our friends at the Homerton Union of Students to hold a ‘hustings’ event, open to the whole local community. This will take place at Homerton College on 21st November at 8:00pm, and will give you a chance to hear the candidates, and ask them questions. Entrance is free. Just come along to the college, where the event will be signposted. Do join us!