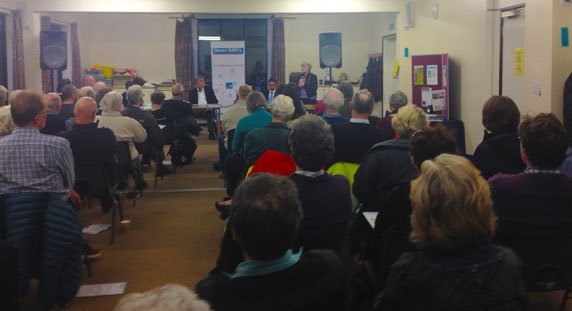 If you’ve ever been involved in organising a public event, you know what it’s like. The one big question is always: “Will anyone turn up?” Fortunately, we residents of Queen Edith’s can be a community-minded bunch, and the Queen Edith’s Community Forum has a pretty good record on engagement in its short recent history. And so it was that I found myself chairing the (first ever?) Queen Edith’s local election hustings event on Thursday in front of a room full with over 60 people.

It’s fair to say the event was a great success, and the Cambridge News was very complimentary in its coverage (click to read): 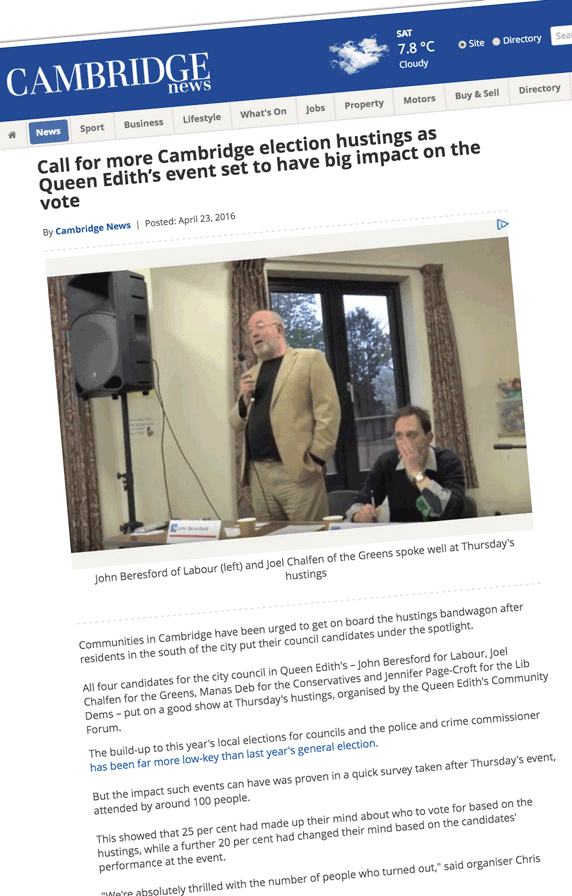 I understand that hustings events for local elections were more common once upon a time, but I don’t recall ever knowing about one around here. So now that we’ve shown it can be done, we need to ask ourselves: “was it worth it?”

All four candidates took the event seriously, answered all the questions very well, and gave the audience a good insight into their personalities. For them, it was certainly a good use of a couple of hours.

From those in the audience, the anecdotal evidence was overwhelmingly positive. But we need data, so we arranged that in the form of an exit poll where people dropped a dried bean into a jamjar representing their thoughts. About 50% of responders indicated that they were fairly certain of who they’d vote for beforehand, and they hadn’t changed their mind (although bear in mind this will have included the sprinkling of existing councillors and party activists present). More interestingly, 25% said they hadn’t really known who to vote for but now did, and a further 20% said they’d changed their mind based on the candidates’ performance at the event. Those numbers are to me the real justification for our efforts.

Now, changing the voting intention of 25 to 30 people probably won’t alter the course of the election, but it shows potential. Maybe in future years we could hold more than one such event, visiting other parts of the ward to bring it even closer to the electors.

I’m convinced that there’s a much greater interest in the local council election than the fairly low voting turnouts suggest. As blogger Jack Monroe has just written rather brilliantly, “I?m not interested in politics. (But) I?m interested in my town, my family, our lives.” However, if people don’t feel they have the information on which to vote, they don’t vote. That’s why turnouts are low.

Sure, the Liberal Democrats may post stuff through our letterboxes what seems like every day for a month before the election, causing a sufficiently sized minority of residents to think: “Well, that all seems reasonably sensible, and at least they can be bothered, so I’ll vote for them.” But many more people might come out and vote if they know about all of the candidates. Plenty of folks identify themselves in general as supporters of a particular party, but don’t turn out to vote in case ‘their’ party has quietly and unexpectedly put forward a candidate who is someone they wouldn’t want as a councillor. They just don’t know.

For example, I think it’s fair to say that my wife has sympathies for one particular party, but might not have gone out and voted, because had it not been for the hustings, she probably couldn’t even have been sure that they were going to have someone on the ballot paper. Once she saw and heard their candidate on Thursday night, and saw that the candidate didn’t have two heads and could string two words together, she instantly became determined to go out and vote.

I don’t think it’s reasonable in this day and age to expect the council itself to organise hustings events. That’s going to be down to local communities. But I will write up a guide to what we’ve learned, in the hope that it might inspire more such events elsewhere in the city next year and in the future. Watch this space. In the meantime, you might like to watch the videos of the candidates at our event, filmed by the excellent local video blogger Antony Carpen. Warning: contains quite a lot of me. 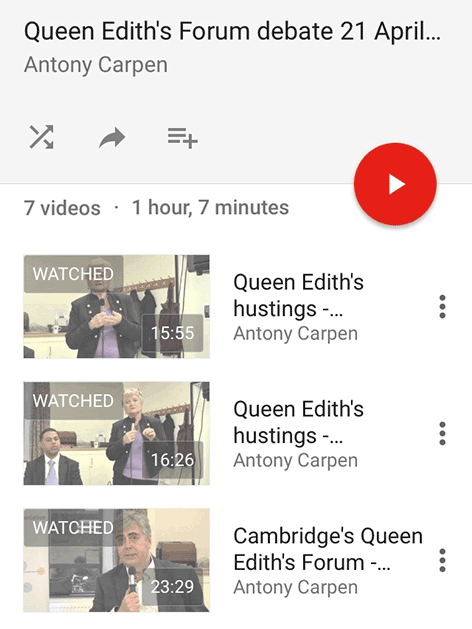