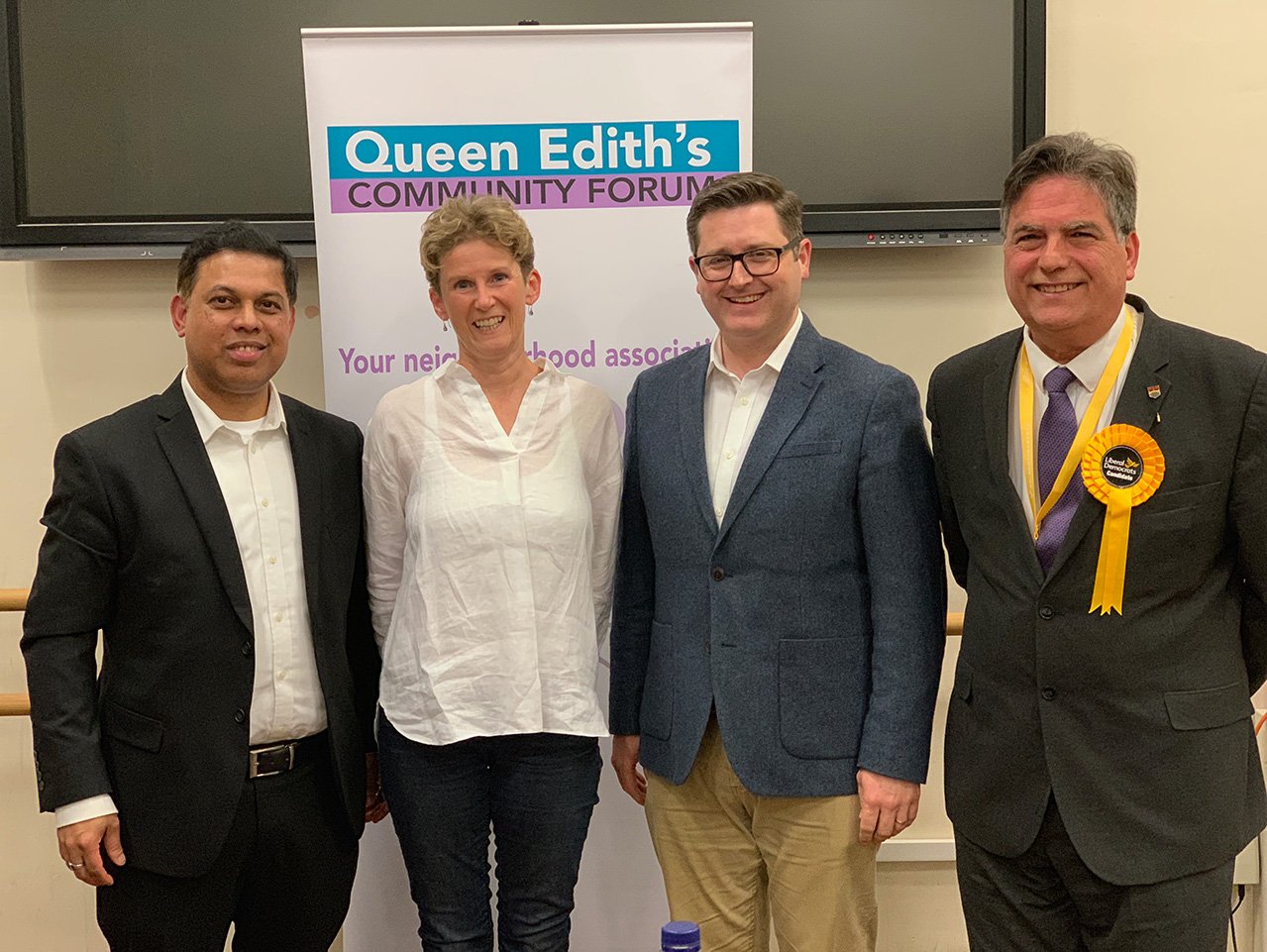 I recently reviewed the candidates for the forthcoming Cambridge City Council Election here in Queen Edith’s, and as a warm up for polling day, the Queen Edith’s Community Forum held its traditional “Meet The Candidates” (or “Hustings”) event, one week beforehand. Although we have five candidates this year, instead of the usual four, the Green Party candidate was unable to attend, so the traditional four candidates faced about 70 members of the public, a great turnout especially as we’d changed venue.

I was once again in the chair, and we used the same format as last year, with pre-announced introductory and general questions in the first half, followed by written questions from the audience after the break. I thought that all four candidates acquitted themselves well (I’m not sure I’d like to do it!), but make up your own mind, as once again we were fortunate to have Antony Carpen there to record proceedings. His two part video can be found here and here, but if you don’t have two hours to spare, you might like to follow the direct links I’ve provided below. Enjoy!

New to this blog? I just chat about local issues here in Queen Edith’s, including property development applications down your street, local election campaigns and results, that sort of thing. Sign up here to get an email notification whenever I post something new, which is only once or twice a month.

There were many more questions from the audience than we had time to cover. After the event, as its chair, I emailed the unasked questions to the four candidates who attended. I suggested they choose just one or two of them to answer, and three candidates replied. Here’s what they said:

On the question: “Should there be pedestrian crossings over the cycleways at the new Fendon Road roundabout?” we had two answers:

Sam Davies (Independent): Yes! I took part in the traffic counts organised by former councillor Tim Moore several years ago, and at that point there was a very clear emphasis on safe crossing facilities for pedestrians. However, when the project was taken up by the County Council, it was handed over to their Cycling team and I think that’s where the ‘confusion’ set in. It would be completely unacceptable to spend the money and create the disruption inherent in this project and not even gain safe pedestrian crossings out of it and I’m very relieved that, albeit rather late in the day, our current councillors have asked the Cycling team to revisit their designs. We all wait eagerly to see what emerges.

We had one answer to the question: “What plans to you have to include the ‘forgotten’ residents of Queen Edith’s?”

Sam Davies (Independent): I’m not sure whether the person who asked this question was referring to specific groups within the Queen Edith’s population, or the fact that the whole ward seems to get overlooked, so I will briefly try to cover both parts. Regarding specific groups who are ‘forgotten’, one of the systemic problems Queen Edith’s faces is that the Anti-Poverty strategy the Labour group introduced when it took control of the City Council in 2015 operates at a ward level. As Queen Edith’s is deemed to be an affluent ward overall, our services are rationed which means that unfortunately even the people suffering the greatest social and economic disadvantage within the ward lose out. I have tried, through my work with the Queen Edith’s Community Forum, to combat some of the effects of that – for example, the City Council’s ChYPPS (playworkers scheme) withdrew from the area for a couple of years because Queen Edith’s was “not a priority”, but I persuaded them to come back and run summer holiday activities, etc.

In addition, I was optimistic that our City Council Community Development Officer would be able to help with doing some detailed analysis across the ward to identify groups who could most benefit from support, particularly in relation to isolation and lonelinesss. However I learned just before Easter that his hours were being reallocated to another ward, and the time he had available for Queen Edith’s would be reduced by more than half. So the necessary analysis will take longer to complete and the people who could benefit most will lose out again. If I am elected on 2nd May, I will press very hard for the reinstatement of his hours so we can get the job done more quickly and direct support more efficiently.

Finally, I spoke a little bit at the hustings about the idea of ‘social capital’ and how we need to be creating and nurturing opportunities for people to come together and build a healthy community. The seemingly endless delays to building the new pavilion in Nightingale Park have not helped one little bit with this aim, though it has now finally received planning permission. If elected, I would also press for substantial investment in refurbishing the Wulfstan Way shops. This area should be absolutely at the heart of the south of the ward and to see its slow decline, through no fault of the businesses there, is disappointing, especially as these retail units are owned by the City Council. I want Queen Edith’s to be both a liveable and lively neighbourhood.

Finally, we had an answer to the question: “What do you intend to do to tackle drug use in our public places and schools?”

Manas Deb (Conservatives): Drug dealing in Cambridge is now being driven by London gangs. Police officers are fighting a constant battle to save the city from drug dealers who commute from the capital. The issues around drug dealing are something called cuckooing, which has issues round county lines in which London gangs, and others, come out of their location and go to sell in Cambridge secondary schools.

I have seen petty drug activities in open spaces, spilling out into the streets of City Centre and nearby parks. They take drugs openly and I have witnessed them using crack cocaine pipes and syringes. Suspected dealers often appear on bicycles throughout the day, usually scruffily dressed, stay for a transaction and then move on. Often, they use yellow bikes and leave them in the middle of the pavement.

Some suspected dealers are more smartly dressed and have been seen talking to the young school children and regular street people. I am worried about drug use near children?s schools and play parks. If elected as a Councillor I will work with schools, parents of young children, local community and Police to organise special clean-ups to avoid children finding dangerous drug paraphernalia. I will also try to visit different secondary schools in Queen Edith’s to educate children how to prevent drug use among youths. Every parent wants their child to thrive, which means teaching them to say no to drugs is imperative. To help your child avoid drugs, start talking about the dangers of drugs with your child as early as possible, so they feel comfortable discussing the subject with you. Then, continue the dialogue by using the media, role-playing, and modelling to bring the message home for your child.