It’s that time again, when this blog looks at the forthcoming Cambridge City Council election in Queen Edith’s, and tries to work out what’s going to happen. For at least one reason, as you’ll see, it’s the most interesting election in this ward for several years!

As ever, please note that this is my personal blog, with personal opinions.

What’s this one all about?

We’re electing one of our three representatives from Queen Edith’s on the city council, which deals with planning policy and applications, housing, waste collection and parks, amongst other things. Normally, this councillor would serve for four years, but the entire council will need to be re-elected next year because of boundary changes (mainly elsewhere in the city). So whoever we elect will only get one year!

What are the party politics?

As I remark every year, I believe that things would be so much better if local councils weren’t so dominated by party politics, but they are, and we have to live with it. All but 2 of Cambridge City Council’s current 40 councillors (another 2 seats are vacant) belong to the Labour group (25 of them) or the Liberal Democrats (13), and it’s almost unheard of for anything to happen other than one party voting one way, and the other against them. ‘Debate’ in the council chamber never makes any difference. Making up the numbers on the City Council are 1 Green Party and 1 independent councillor. Here’s how things were left after last year’s election: 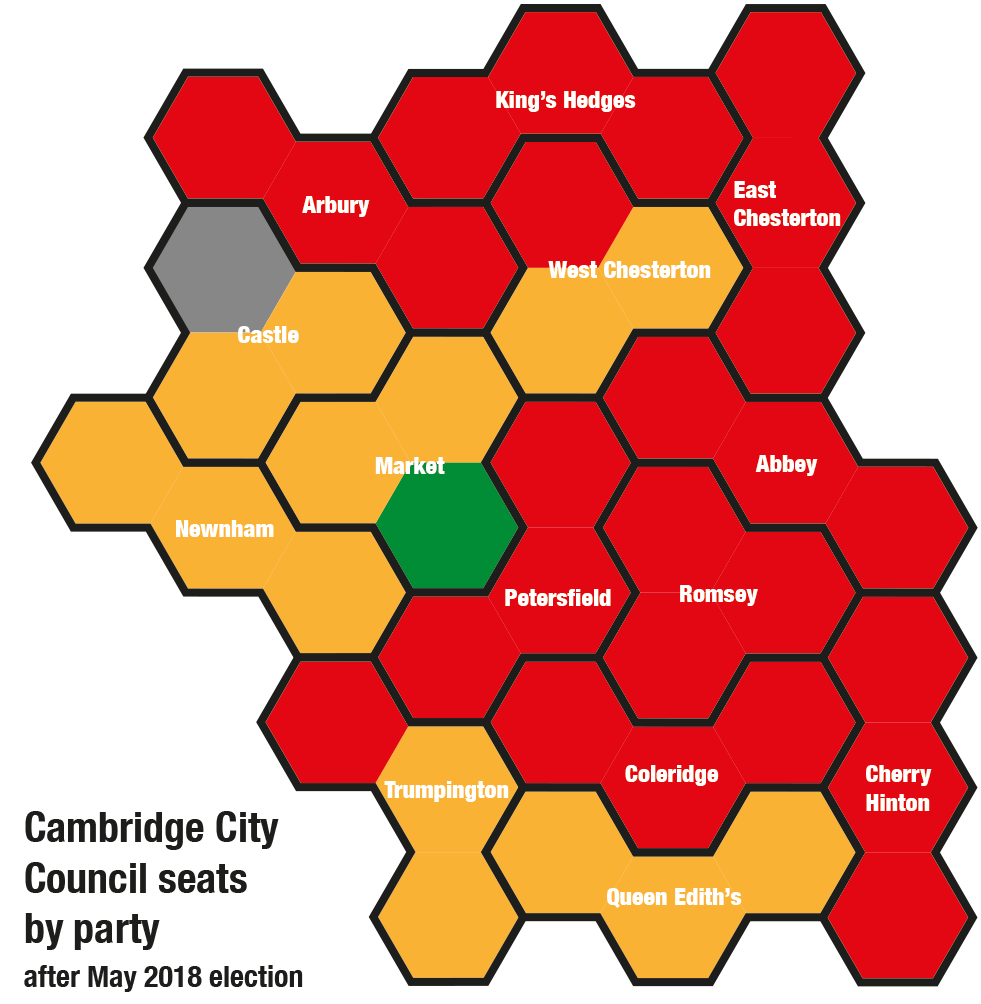 Of the 16 seats where there are elections this year, 9 of them are held by Labour, 6 by Liberal Democrats and 1 by the Greens. I understand that Labour consider all of their 9 seats to be ‘safe’; if there are any changes of party numbers, they will most likely happen in 4 of the 6 seats currently held by the Lib Dems, or in the 1 held by the Greens. So if there’s any change in the political makeup of the council, it’s only likely to reinforce the large Labour majority even further.

Enough of this, what about Queen Edith’s?

Queen Edith’s would normally be considered as one of the two ‘safe’ Lib Dem-held seats in this election, but there’s a wildcard this year which has made things look a little more interesting. The wildcard is an independent candidate, the first to stand in the ward’s history. It’s surely unlikely that a candidate with no party backing can win from nowhere; Cambridge hasn’t had an independent city councillor (other than a handful who’ve left a party to become independent) since the 1970s. However, who knows what impact this development will have on the election? It’s certainly unpredictable. The independent candidate is Sam Davies, who many readers will know that I’ve worked with closely on the Queen Edith’s Community Forum for several years. I shall remain objective!

It’s early days in the election campaign, but I’m not expecting it to be a particularly active one in Queen Edith’s. I know that both the Labour and Liberal Democrat parties are concentrating their efforts on neighbouring Trumpington, where there are two city council seats up for election, and last year’s winner got just 4 (!) votes more than her main opponent. The Conservatives in Queen Edith’s have traditionally fewer local resources, and the Green Party almost none. The independent candidate will need to drum up an unlikely amount of help from residents to get anywhere near the typical campaigns of the traditional parties, never mind making things seriously competitive.

Here’s a brief introduction to the candidates. I encourage everyone to read their literature and their websites – and as ever, if you don’t get any literature from them or can’t find anything substantial online, take that as an indication of their interest and enthusiasm. There’s also the Queen Edith’s Community Forum’s ‘Meet The Candidates’ event, where you can hear from them in person. It’s unique to Queen Edith’s in the city as a regular event, so do continue to support it by coming along. As ever, I’ll be in the chair, it’s free to attend and full details are here. Note that we’ve had to change venue this year. 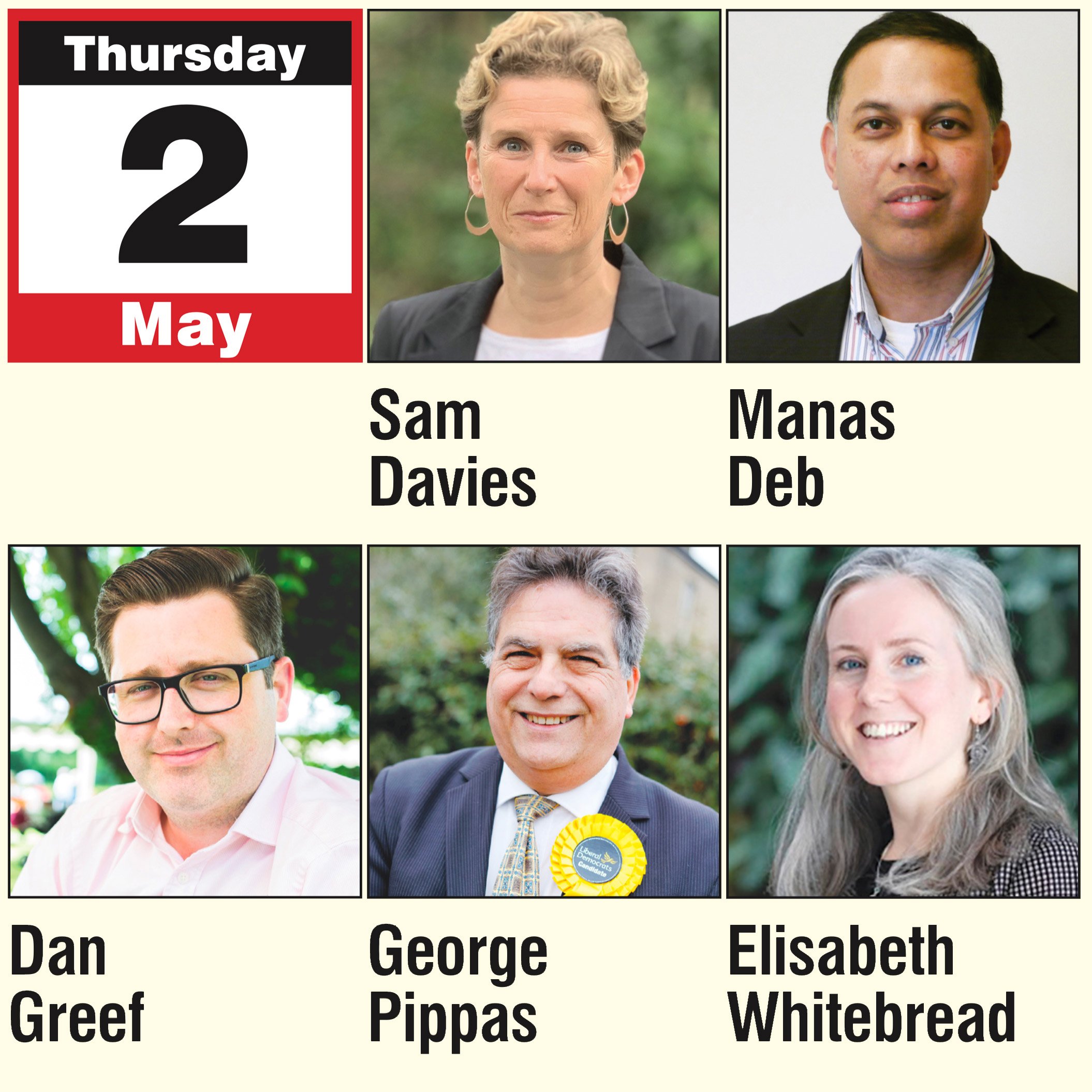 George Pippas will start as the favourite, as the good people of Queen Edith’s have dutifully elected the Liberal Democrat party candidate in every election (bar one) for 25 years. George is standing for the third time, and was the city’s mayor during his most recent term as councillor. Two of his opponents, Manas Deb and Dan Greef, have been candidates in Queen Edith’s before, for the Conservatives and Labour respectively. The other two names on the ballot paper are new: the independent Sam Davies and the Green Party’s Elisabeth Whitebread. Women candidates have previously been very thin on the ground here in normal City Council elections, and the last time we had two women on the ballot paper was the only time in 25 years when the Liberal Democrat candidate didn’t win. I doubt that’s an omen though.

All of the candidates supplied brief statements for Queen Edith’s Community News, which give an idea of their priorities. If you haven’t seen the issue already, you can read what they’ve written here.

It would be a big upset if George Pippas didn’t win the election. Many people vote on a party political basis, and although some national party allegiances are shaky at the moment, that surely won’t apply to the Liberal Democrats here. The Conservative and Labour candidates are well known locally: Manas Deb has stood in the three previous elections, and Dan Greef in one (although Dan is possibly even better known here as having been runner-up to Heidi Allen in our last two parliamentary elections). However, neither got close to their Lib Dem opponent in any of the previous council elections, so I’m not sure why anything might change this year. As a new face on the local scene, I wish Elisabeth Whitebread well, but she is surely just making up numbers for the Greens, as even her eloquent predecessor Joel Chalfen couldn’t avoid finishing in fourth place in six previous attempts. This just leaves the unpredictability of how well the independent candidate Sam Davies might do: she is a widely respected local figure, but despite having a growing group of friends and supporters to help her campaign, it’s an enormous task to get noticed by nearly 3000 local voters. It will be interesting to see what she can manage to achieve.

Queen Edith’s, once again it’s over to you!

The other candidates do not have websites but there may be information on their party sites: