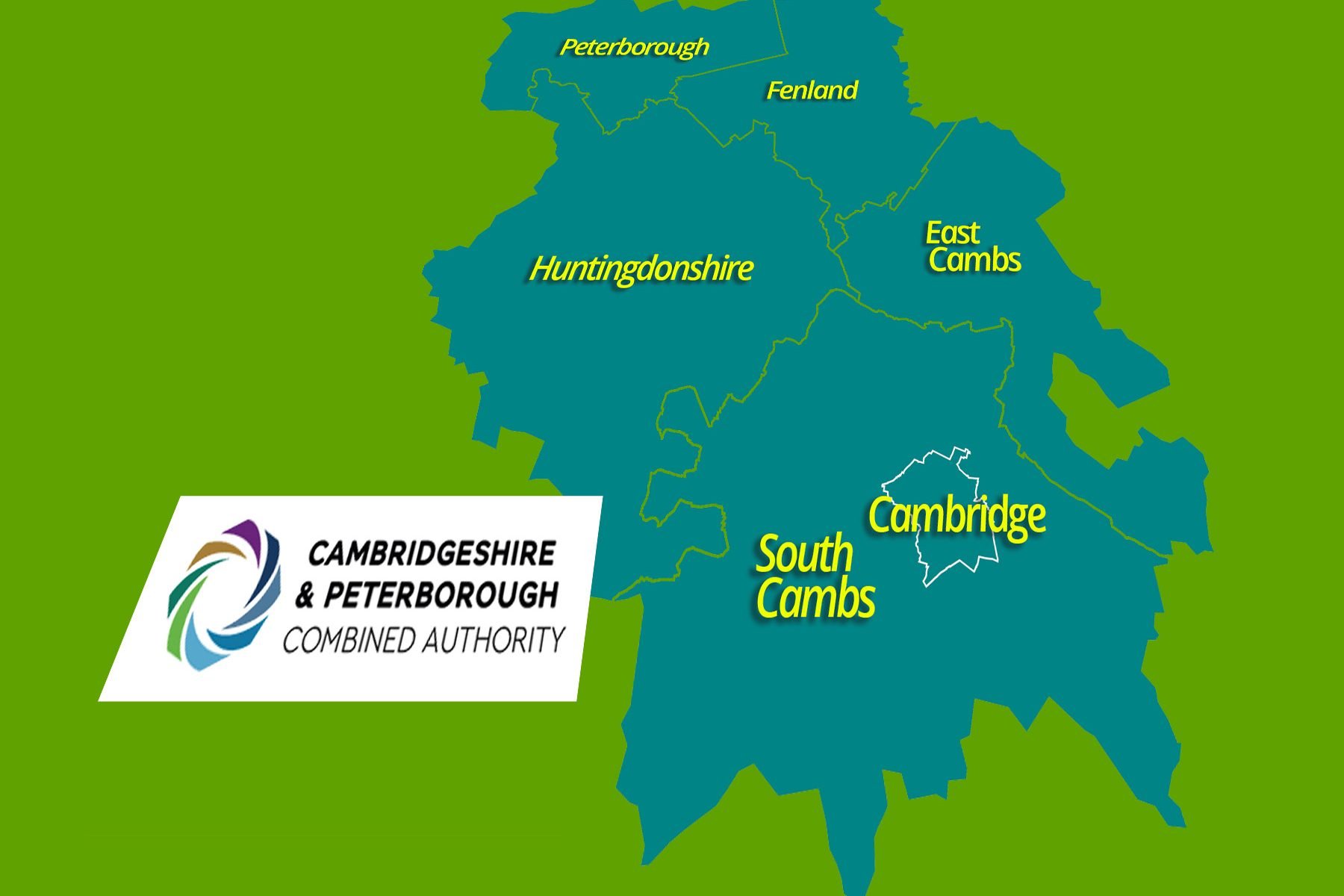 Apart from the two council elections, which I covered in parts 1 and 2 of this series, Queen Edith’s electors get to join in with two Cambridgeshire and Peterborough-wide elections, for a Mayor of the Cambridgeshire and Peterborough Combined Authority, and the county’s Police & Crime Commissioner. Of all the elections that we’re offered, these are the two where our votes count the least. In the City Council and County Council elections, your vote and mine are each among 2,500 or 3,000 that will be cast. Not a great chance of influencing the result, but you never know. At a General Election, choosing our MP, our vote is 1 in about 60,000. Still, we do it anyway. But in these two, which both take place as a giant election over the whole county, our vote is 1 in about 200,000. It feels good to vote, but don’t expect yours to be the one that gets the winner over the line.

The map of the Cambridgeshire and Peterborough Combined Authority area below shows the different districts in the county, but everyone’s votes are just all lumped in together. 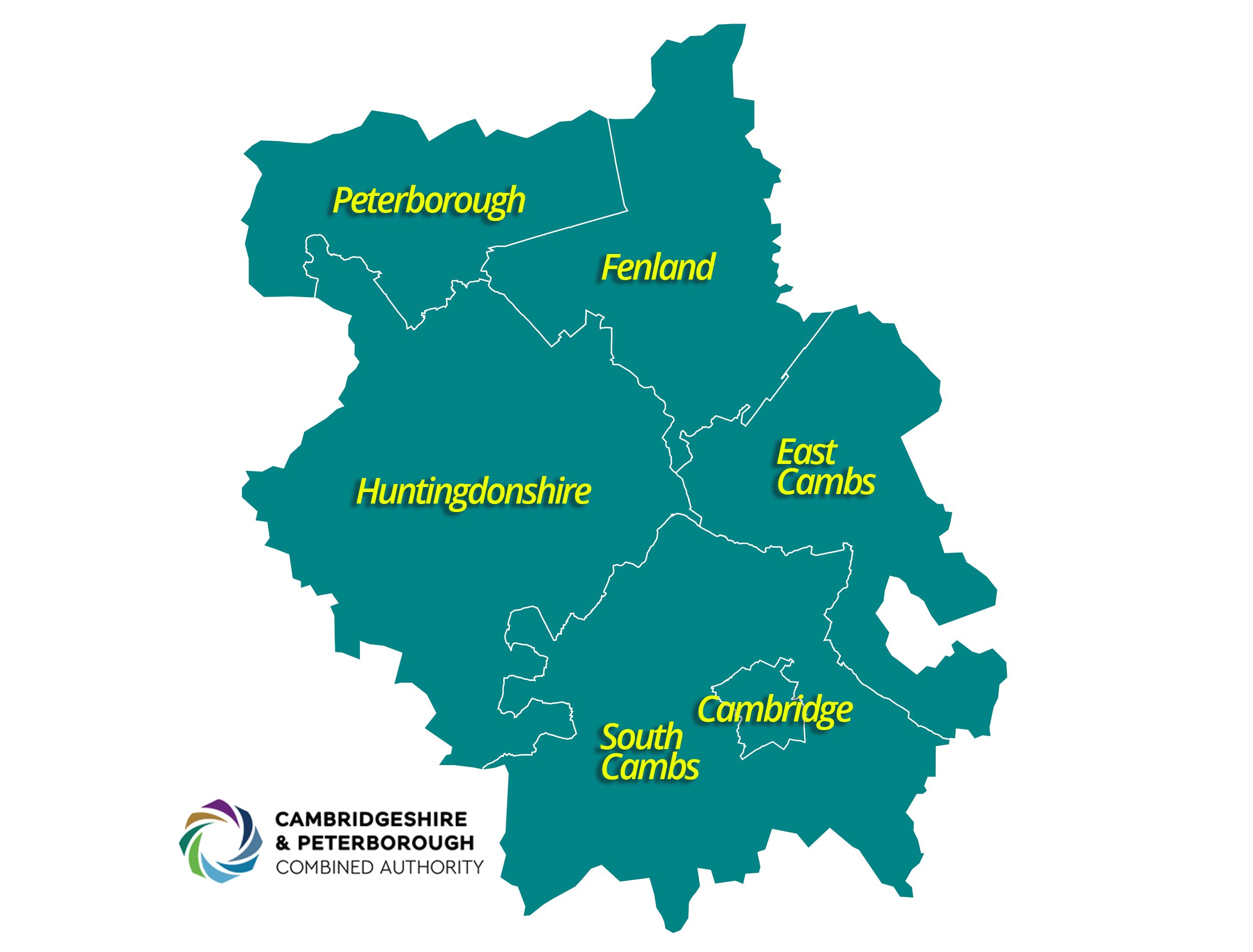 The Combined Authority is a strange beast. It’s based on the nine or ten other combined authorities set up in our big cities, with their ‘Metro Mayors’, but nationwide we’ve ended up as the only one in a rural area. The idea is to bring together different councils under one roof for issues which require wider co-ordination, such as transport. But in Cambridgeshire and Peterborough it’s just resulted in an additional arm of local government, often working at odds with the councils. Having it under the control of a more distinct figurehead than councils has just created even more conflict.

The Cambridgeshire and Peterborough Combined Authority came into being in 2017, and the county’s voters duly elected the Conservative Party candidate James Palmer as the Mayor. Mr Palmer had already signalled different intentions to the County Council, and has spent the last four years developing completely independent transport plans to the ‘Greater Cambridge Partnership’ organisation created for the purpose by the councils responsible for Cambridge itself and the wider area surrounding it. Those pie-in-the-sky bus things that look a bit like trams, and are supposed to run through tunnels under the city? They’re the Mayor’s idea. The eye-wateringly expensive bus-only road from Queen Edith’s to a giant car park out near the A505? That’s the councils’ idea. There’s very little co-ordination and a lot of posturing going on, at great public expense.

Anyway, we have three candidates from which to choose (the Green Party hasn’t bothered with this one, possibly because of the huge deposit required to run). They are James Palmer, the current Mayor, for the Conservative party; Nik Johnson, a children’s doctor at Hinchingbrooke Hospital, for the Labour Party; and Aidan Van de Weyer, deputy leader of South Cambridgeshire District Council, for the Liberal Democrats.

When running for the new role in 2017, Mr Palmer pledged to keep operational costs to £850,000 a year. Opponents are now saying that his costs have reached over £5 million per year. That sort of thing might hurt a candidate in many places, but not in the more rural parts of Cambridgeshire when it comes to a Conservative candidate. On first preference votes, I’m sure Mr Palmer could do or say anything and he’d still win easily.

There’s a bit more information available about the candidates in an expensive booklet about the election which you may have got in the post. Don’t worry if you haven’t yet – it’s terrible. In its twenty pages of often muddled (and very dull) explanations about all of the elections, there are just six pages of badly-presented, almost unreadable guff from the candidates themselves. What a waste.

Police and Crime Commissioners were introduced in 2012 to replace the now-abolished police authorities. ‘PCCs’ are not police officers and hold no rank, but are elected officials tasked with securing efficient and effective policing of a police area. Theresa May, who as Home Secretary introduced the commissioners, considered the policy to have had mixed success. Issues have included conflict between PCCs and chief constables, questions over PCC expenses, and the cost of elections. In addition, several of the elected PCCs have not proved to be exemplary public servants. Our most recently-elected PCC here in Cambridgeshire, Jason Ablewhite, resigned following a referral to the Independent Office for Police Conduct. This resulted from a member of the public alleging he had sent her indecent photographs of himself. He was replaced for the last few months by his deputy, Ray Bisby, but the next election was delayed for a year until now, and Mr Bisby has ended up serving in the post for nearly 18 months.

There are four candidates for the post, one each representing the Conservative, Labour, Liberal Democrat and Reform parties. I’m never quite sure why the election of this official has to revolve around political parties, but that’s the hand we seem to have been dealt. You can find out about them here, where there’s an online version of a booklet with statements from each candidate. In many PCC elections, the choice is often between politicians who want to provide external control and guidance to the police force, and ex-police officers who want to work more ‘with’ the force. That’s what we have here, with the Conservative candidate as the one in the latter category.

There’s a terrific article on The Cambridge Town Owl blog here if you’d like to read more about the PCC Election.