The Local Government Boundary Commission for England today published its final proposals for the redrawing of ward boundaries for Cambridgeshire County Council, and it decided against the ‘marriage of convenience’ between Queen Edith’s and Trumpington, designed to avoid moving the western edge of Queen Edith’s into the neighbouring ward. The two will remain separate, but residents of the west side of Hills Road (as well as Luard Road, Sedley Taylor Road and the new Magna development) will now be part of Trumpington for County Council purposes.

A little bit of background. We’re a county council ward, one of 69 covering Cambridgeshire, and Amanda Taylor is our councillor there. And we’re also a city council ward, one of 14 covering Cambridge. Tim Moore, Jennifer Page-Croft and George Pippas are our councillors there. I know from speaking to people at Queen Edith’s Community Forum events that many people get very confused by all the local political boundaries. Someone told me: “we used to be in the county, and now we’re in the city”, and there are many other such misconceptions. There are two councils, and we elect representatives on both. I wish our councils would make these things clearer to people, and provide explanatory documents at local elections. But they choose not to do so.

Here’s where things are changing. Until now, the councils have shared the same ward boundaries across the city. However, Cambridgeshire County Council is reducing in size from 69 councillors to 63. Two of the lost wards will be here in Cambridge. Those that remain (including Queen Edith’s) will expand a bit. But that’s just for the County Council. At the moment, there are no plans to change the number of councillors on Cambridge City Council, so that will keep the current wards. Many residents will find themselves moved to a new ward for the County Council but staying in the old one for the City Council. It’s not ideal.

In drawing up the new wards, the Local Government Boundary Commission has long been obsessed with keeping them as close in populations as possible. Cambridge’s problem child is Trumpington, which doesn’t have enough residents to be a ward on its own. So in the current arrangement, it reaches out right into the city as far as the railway station, which we’ll all agree is daft. The Commission’s proposal this time has been to grab some of Queen Edith’s instead. During its deliberations, it suggested combining Queen Edith’s and Trumpington into a double-sized ward, but the local politicians complained long and hard about this. I thought it was the best compromise, but you can’t win them all.

Here then is the final proposal for the new, enlarged Queen Edith’s for County Council purposes. Click to see a much more detailed version: 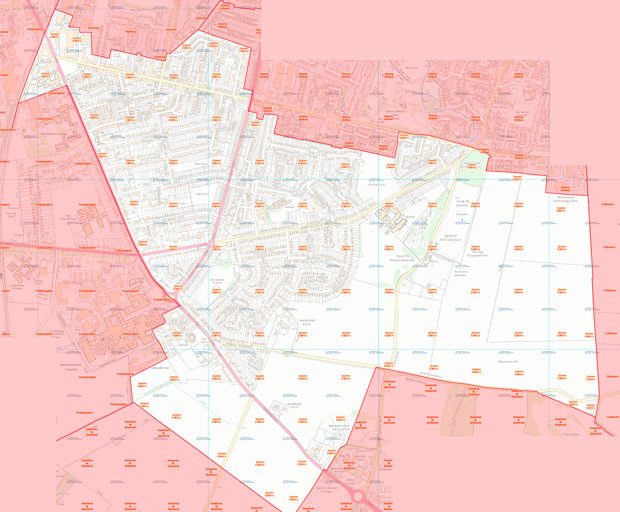 How will this affect you? Here’s the list, as I see it (let me know of any anomalies please!):