Remember last November, when Queen Edith’s had a council by-election, and with nothing else happening, the effort of all the city’s political parties turned towards our ward? You couldn’t move for the sea of paper coming through the letterbox. Well, now it’s time for the next council election, and things couldn’t be more different.

Firstly, it’s on the same day as the country is electing its new MPs, so the council election is barely acknowledged. I suspect few residents have thought about it. Many probably don’t even know it’s happening.

Secondly, any political activists round here with a pulse (certainly from the Lib Dems, Labour and Greens) have been hauled away to the city constituency to push leaflets through doors for Julian Huppert, Daniel Zeichner or Rupert Read. We’re left with just the five council candidates themselves – and a group of supporters who barely outnumber them – to campaign for the city council election.

I’ve only seen one leaflet so far which has been exclusively about the council election. Only one candidate seems to have his name on garden boards. Tumbleweed blows through the streets of Queen Edith’s.

For that reason, I’m going to make the effort here to discuss all the five council candidates, because most of them don’t seem to have the resources to promote themselves. I hope it’s enlightening.

So, what is the election about? Well, Queen Edith’s, like all the 14 wards in Cambridge, has three city councillors. As a reminder, the city council is responsible for things like planning and building control, housing, leisure services, rubbish collection and licensing. (The separate county council is responsible for schools, roads, social services and libraries). We elect one new councillor for our ward each year, and their post lasts for four years.

At the moment, 40 of the 42 city councillors are associated with a political party, although their commitment to their party’s ideologies seems to vary considerably. Some are very much in it “for the party”, others seem much more concerned about the residents they represent. Because councillors are elected one each year, most wards have three from the same party.

In Queen Edith’s, all three are Liberal Democrats, as they are in Newnham and West Chesterton wards. However, we did briefly have a Labour councillor here from 2012 to 2014! The makeup of the city council, by party, is currently like this:

Of the seats up for election, 8 are currently held by Labour party and 6 by the Liberal Democrats. Although some may change hands, it’s highly unlikely to be enough to change the overall majority on the council.

In Queen Edith’s, here’s how the voting has gone, by party, over the last 20 years (click to enlarge). 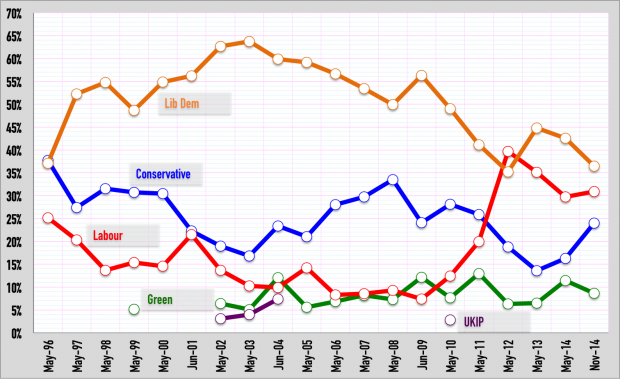 You can see that for 15 consecutive elections from 1997 to 2011, Queen Edith’s elected a Liberal Democrat councillor – on 11 of these occasions with more votes than all of the other parties combined. For all of that time, the Conservative candidate was the runner-up.

Then, in 2012, came the surprise election (although perhaps not to readers of this blog) of a Labour councillor. This proved to be a one-off, and the ward has gone back to the Liberal Democrats in the last three elections, although with Labour now firmly in second place.

However, this could be a more interesting election than it appears. Past history has shown that the General Election has little impact on local council voting. More significant factors which might come into play this time include the lack of local campaigning from some of the parties (see above) and a noticeable recent upturn in the performance of the Conservatives. There’s also a UKIP candidate, the first since 2010. I would not be surprised if we get an interesting result.

Index to candidates and their introductions on this site: