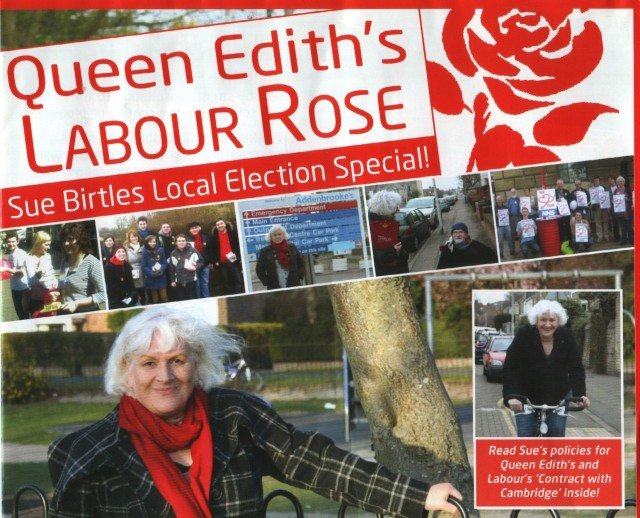 The first ever Labour councillor to be elected in Queen Edith’s, Sue Birtles, has resigned from the position, halfway through her term of office. Although Councillor Birtles was a resident of Queen Edith’s at the time of her surprise 2012 election, she has since moved to Kings Hedges. In addition, Councillor Birtles has been selected as Labour’s prospective parliamentary candidate for our constituency (South Cambridgeshire) and will be standing in next year’s general election.

Councillor Birtles’ election broke a long sequence of Liberal Democrat wins in Queen Edith’s. Although there has been a clear growth in the Labour vote in the area, her win back in 2012 seems to have been down to some extraordinary campaign organisation that year, which may have been something of a one-off. The pattern of Liberal Democrat wins in Queen Edith’s has resumed in the two council elections since.

On a personal level, I have found Councillor Birtles to have been approachable and effective as a councillor, and her resignation will be a loss to Queen Edith’s. I also believe it’s been healthy to have had councillors from more than one political party.

A by-election for the city council vacancy will be held here in the next seven weeks. This will of course will be covered fully on Queen Edith’s Online.