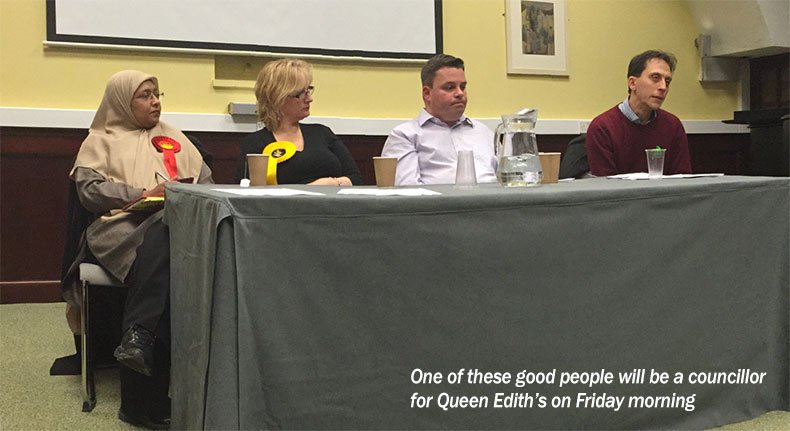 “I’m told that, amazingly, this sort of event hasn’t been done around here for many years”, said Jack Hooper, President of the Homerton College Union of Students and organiser of the Queen Edith’s byelection hustings event this evening. The college wasn’t specifically setting out to do something different though – having a pre-election hustings event like this just seemed natural to them. It was only later that they discovered how unusual it is to have candidates in a council election actually stand up and answer questions before polling day.

But simply by arranging this event, they really showed Cambridge City Council (and other councils) how local democracy could – and should – be brought to the people.

For two or three of the candidates, this was their first time on a stage in front of prospective voters. The audience contained interested students, of course, but we also spotted the councillor whose resignation had caused the byelection, the two main parliamentary candidates who will be fighting it out in South Cambridgeshire next May, and a handful of other councillors and local activists. A “public” version of the event would have attracted a significant number of local residents, I’m sure.

The candidates were allowed a few minutes each to set out their stall, then there was an hour’s session answering questions submitted by the students. The introductory speeches were illuminating, with Rahima Ahammed (Labour) coming over as passionate and slightly excitable, and Joel Chalfen (Green) presenting himself successfully as both thoughtful and visionary. Viki Sanders (Liberal Democrats) outlined her previous council experience and headed off one potential line of criticism by explaining exactly why she was unable to complete her previous council stint properly, something which two of her opponents had highlighted in their literature. I felt that Andy Bower (Conservative) missed an opportunity to differentiate himself from the council’s dominant parties here, but he warmed to the theme with later answers.

The questions were good, although understandably student-focused. The candidates were asked about the Uni4 bus service, and what they could do for students, whose needs I think are poorly served by councillors, in relation to their numbers. Nobody said anything controversial, with Rahima Ahammed seeming most familiar with the problems (she is a former Homerton student).

Somebody pre-empted what would have been my own question by asking what the candidates thought was more important, the wishes of the people they represent, or their “party line”. If I have any personal political view, it’s a dislike of political parties, especially in local government, and there is nothing I detest more than councillors who speak up in support of electors’ wishes, then promptly vote the other way. We saw this with the local Liberal Democrats’ attitude to the controversial Worts’ Causeway development, but I’ve seen it from Labour and Conservative councillors too, in the 22 years I’ve lived in south Cambridge. I think Viki Sanders was a bit non-committal; Andy Bower said that he often holds opinions contrary to his political colleagues; and Joel Chalfen pointed out that the Green party has no whip.

However, it was Rahima Ahammed who surprised me, with a passionate defence of the importance of “the party line”. I applaud her honesty, but she promptly lost my vote. Political ideologues who think that party unity is so important are not for me. You might think differently.

After another one of her enthusiastic monologues, I tweeted that Rahima Ahammed claimed she’d spoken to 3,500 residents in 7 weeks. I checked with her campaign literature, and it said that her team had spoken to 3,500 residents in that time. Fair enough. Then I remembered that Sue Birtles’ shock win for Labour in 2012 had – apparently – been based on talking to a similar number of people in 7 months, so out came the back of an envelope, and I worked out that campaigning a ridiculously unlikely 10 hours a day for 7 weeks would still require the team to speak to someone every 7-8 minutes. It’s clear then that the Labour party has been putting in a lot of effort to make an impact in the Queen Edith’s byelection.

I collared the candidate after the hustings to ask about this, and she was keen to explain more, but her “minder” decided that was enough for one evening and ushered her away. He did say, however, that the amount of house-to-house campaigning from the Labour party proved that “they took Queen Edith’s seriously”. This was obviously a reference to outgoing councillor Sue Birtles’ suggestions that they do not. I’m sure I also heard Rahima Ahammed mention Daniel Zeichner as “our parliamentary candidate”, when he is nothing of the sort in Queen Edith’s, so although I don’t doubt her loyalty and enthusiasm for the area at all, I’m still not convinced that it’s shared by the local Labour party as a whole.

Overall, I think this is the strongest set of council candidates we’ve had in Queen Edith’s for some time, mainly because none of them seem to be “paper candidates”, which the Conservative and Green parties have put up on occasion in the past. All seem genuinely interested in our area, and any would probably be a decent representative for us. If not… well, I guess they’ll be up for election again in 18 months’ time.

My thanks once again to Homerton College Union of Students for allowing me to attend, as well as fellow blogger Antony Carpen, who summarised the event well with these tweets as Puffles The Dragon Fairy:

Antony’s videos of the event are being published on Puffles’ Vimeo channel.

3 Replies to “Byelection News Roundup No.3 ? the Hustings”